And so the “Goodness, these animated movies are wonderful!” streak of imaginative, highly-recommended children-oriented films comes to a screeching halt with DreamWorks Animation’s release of Home. Scattershot in its execution and harebrained in its intentions, Home so desperately wants to be that next big thing that the kids’ll be talking about for years to come; I’d be surprised if they’re talking about it in the next two weeks. Nothing really sat right with me at all about this film, and here’s why. But first, here’s what’s right. 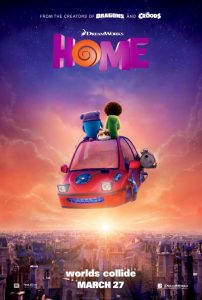 Home starts out relatively fine – a meek, colorful alien race called the Boov, led by Captain Smek (Steve Martin), has just picked a planet – Earth – to call home after running from the evil Gorg, a gargantuan behemoth that’s been chasing the Boov to the end of the galaxy and back. Their stop on Earth is just another in a long line of planets they’ve stopped on while running like cowards from the Gorg. Once they land, they pack up all of its inhabitants and ship them off to Australia to live in one gigantic commune, separating Gratuity “Tip” Tucci (Rihanna) and her cat from her mother Lucy (Jennifer Lopez). 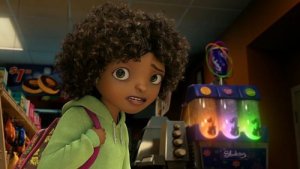 Enter Oh (Jim Parsons), a Boov who seems to be that one guy who doesn’t act like the rest – he’s overly congenial, he’s a bit overbearing, and a bit overmuch. Notice a pattern? It comes to pass that his over-ness has enabled the Gorg to find them, thus making him Boov enemy number one. In evading the Boov police and avoiding everyone else, he encounters Tip, who’s in the same boat as he is as they try to escape Boov detection. Striking a deal with Tip, Oh enables her car with special powers and they set off on a grand adventure to find Tip’s mom.

You see? On the face of it, it’s not that bad. The story is fine, it’s something that we’ve no doubt seen before, but dressed up differently and given voices by current popular stars of stage and screen. However, when the story translates to script and writing for the spoken word, Tom J. Astle and Matt Ember definitely shoulder the blame for how boringly average this movie is. Resorting to such “cutesy” tricks like having the aliens use the English language ham-handedly (yet fairly fluently) and having montage after montage of the getting-to-know-you kinds of things we’ve seen since The Fox and The Hound, Astle and Ember’s screenplay is full of rote predictability, right down to the big emotional moment that’s supposed to kick your tear ducts into overdrive.

Well, it’s kind of hard to truly feel that emotional moment when you’re not invested in the characters at all. I’m not saying that these characters are unlikable; I’m saying that there’s nothing special about them in a film where being special is the whole point of the story. There’s nothing that hooks you to these characters other than a lot of jokey, one-note moments that ultimately don’t mean anything. By the middle of the film, I honestly couldn’t care less if Tip ever found her mom, and I found myself wondering what the point of all Home actually was.

Maybe it’s a vehicle for superstar singer Rihanna, whose vocals aren’t only heard as Tip, but in practically every song you hear in the film. Is Home merely a marketing tool for the recently-released soundtrack? Speaking of voices, the cast does little to invigorate the already-lifeless script. Director Tim Johnson has enabled exactly none of the lead actors to exhibit any range in the film – it’s all shouting, screaming, and grandstanding. Jim Parsons’ invariable-in-its-frenzy delivery combined with the hackneyed script is, in some alternate universe, cute and palatable. In this one, it’s downright maddening. Even Steve Martin (whom I honestly mistook for Nathan Fillion) as the bullheaded Captain Smek can’t summon enough magic to save this. The character is supposed to be an idiot, I suppose, but why use one of the greatest comedic actors to voice him if you’re not going to properly give him room to perform, and instead have him just act like he’s puffing out his chest and beating it? The voice cast is wasted on buffoonery and misguided bluster, and their misuse is a sin.

Everything feels phoned-in and phony about Home right from the start. Its overreliance on the cute factor gets old very quickly, as each character’s traits start to get in the way of any possible fun you might have. The target audience for this film will no doubt find Oh and the Boov endearing, but to those of us who were old enough to catch Meatballs Part II, we’ll just remember them as animated Meatheads with bad language skills. Home had incredible potential to be interesting, with the colorful Boov (whose skins change tones depending on what they’re emoting or saying) and the… I honestly can’t think of a second example. There are plenty of other fantastic flights of animated fancy available; pick one of them instead of Home this weekend.