Posted by Eddie Pasa on April 2, 2015 in Movie Reviews / No Comments

On the face of it, Serena has all the ingredients of a good film – its lead actors and director are multiple award nominees/winners, it sports a beautiful soundtrack, the cinematography is gorgeous, and the supporting actors fill their roles perfectly. With all this, what could possibly be missing? The story and script. Without those two things, what’s a movie besides a bunch of pretty pictures? The thing is, Serena so desperately wants to be a good movie; you can feel it with every picturesque view of the Smoky Mountains, and with all the pathos the actors put forth… but that’s as much as you’re going to get, as there’s no emotional core. 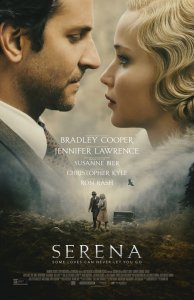 Christopher Kyle’s screenplay features logging baron George Pemberton (Bradley Cooper) in the late 1920s trying to carve out a small empire for himself. We see the kind of people who work for and with him, and we see that he’s had a dalliance on the side with his tea lady, Rachel (Ana Ularu). None of this comes across in the film as anything to care about, until Serena Shaw (Jennifer Lawrence) steps into the picture. Well, more like “gallops,” really – our first vision of her shows her riding a horse in competition, maintaining a perfect coiffure as she puts her horse through its paces. In a matter of minutes, they go from light flirting to courting to married to “Hey! She’s moving in with him and she’s the new boss!” And unexpectedly, she’s a logging know-it-all from the way back, teaching the work gang how to do their jobs better. 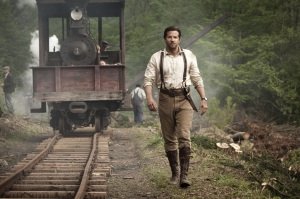 Soon, we see an underbelly to everything. There’s the work gang’s mysterious enforcer Galloway (Rhys Ifans), who forms a shady friendship with Serena that threatens to undermine everything for which George has worked. On top of that, there’s accusations of corruption and bribery, led by the local sheriff (Toby Jones), who’s got a major bone to pick with what George is doing to the mountains. Even further, Rachel shows up pregnant and later bears a son – namely, George’s son – and Serena’s jealousy grows, especially after she suffers a terrible miscarriage that leaves her unable to bear children.

Serena’s themes of isolation and jealousy run thick throughout the film, which is in itself a metaphor for big business and the ruin to which it will run. Yet there’s absolutely nothing that warrants your care or your emotions in this film at all, which is troublesome to me. The film purports to be an examination of a woman’s descent into madness after jealousy consumes her, and I get that. However, it’s as if this woman was written by a man who doesn’t understand women, thus making Serena one of the shrillest, most asinine women ever to grace the silver screen. 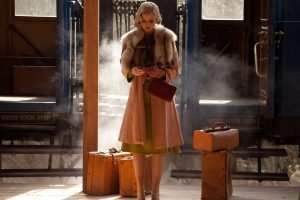 To that end, Jennifer Lawrence succumbs to being what basically winds up as a black widow-type character whose motives and emotions seemingly come from nowhere. We’re given no grounding reason for why she does what she does, and we’re left watching an empty vessel whose meaning is slowly given to us by the movie itself. Meanwhile, Cooper’s Pemberton does little to mitigate any of the circumstances in which he finds himself; the whole corruption thing comes completely out of left field, as does his marriage, and his subsequent end.

Much to-do is made of hunting a panther in the beginning, and although this plot point is revisited from time to time, what good does it serve except to provide some half-baked excuse for an attempt at being sensational in order to line up some semblance of a meaningful ending? It’s as if we’re to begin watching their lives in media res, and we’re to pick up only what the filmmakers want us to see. That’s all well and good if that’s how you want to tell a story – look at Pulp Fiction for a great example of in media res – but a good story has to be built of sturdier stuff, and Serena doesn’t have it.