Posted by Michael Parsons on February 27, 2015 in Movie Reviews / No Comments

You don’t often see an Oscar-nominated film that could also be considered a guilty pleasure. “Wild Tales” (Relatos salvajes), a diabolically clever anthology from Argentine writer/director Damián Szifron, is such an animal. It offers six revenge-themed stories that deal in everything from social inequality to adultery to corrupt lawyers, an invariably entertaining mix that’s delivered with a pitch-black sense of humor. The short pre-credits sequence entitled “Pasternak”, in which passengers are trapped aboard a commercial airliner with a vengeful cabin chief, announces that the filmmaker is fond of nasty punchlines.

Though it’s full of bloody fun, the film doesn’t exactly condone violence: two of its segments suggest that sometimes, even if you’ve been wronged, it’s better to leave well enough alone. In “Bombita”, we see what “Falling Down” might have looked like if Michael Douglas’s character had been a 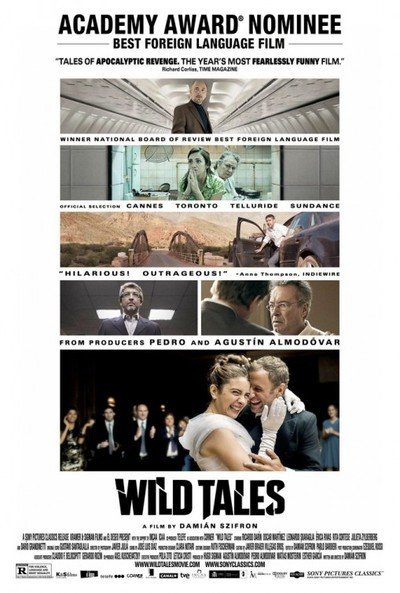 demolitions expert, as an otherwise regular working stiff (Ricardo Darín) inadvertently ruins his life while trying to right an injustice perpetrated by a towing company (let’s just say it ignites more than just his festering cynicism). “El más fuerte” (“The Strongest”) is a more viscerally-charged ordeal, observing the worst case of road rage this side of Tarantino’s “Death Proof”, after an Audi-driving yuppie insults the wrong hillbilly on a remote road. What ensues could have spawned from the pages of Cracked Magazine, but it’s just preposterous enough to have been yanked directly from today’s headlines; it’s both certifiably nuts and disconcertingly plausible.

Other stories focus on moral dilemmas: in what is probably the most traditional of the lot, a fleeting yarn called “The Rats”, a young waitress (Julieta Zylberberg) is presented with the opportunity to kill the man who drove her father to suicide. She’s conflicted, while the devil on her shoulder, an ex-convict cook played by a hilariously fiendish Rita Cortese, tries to convince her to put rat poison in his food. “La propuesta”, the most somber of the mix, finds a wealthy man striking a deal with his groundskeeper to take the fall for his teenage son, who’s just killed a pregnant woman in a drunk driving accident, while his lawyer also attempts to cash in on the deal.

But this crazy compendium concludes with chuckles — dare I say guffaws — in “Hasta que la muerte nos separe”, which makes the translation, “‘Til Death”, look like a welcome alternative to the fate awaiting a new groom who’s made the terrible mistake of inviting a recent booty call to his wedding. “Hell hath no fury like a woman scorned” barely scratches the surface of this deranged, funny (and sometimes hard to watch) segment, and Érica Rivas rivals Rosamund Pike’s turn in “Gone Girl” (spoiler alert!) as a blushing, vibrant bride turned complete psychopath.

All six stories share the brilliant cinematographer Javier Julia (“The Last Elvis”), who often makes us feel like we’re gazing upon the serene countryside from the window of a burning loony bin. While Szifron’s film isn’t totally contemptuous of our society, Julia’s stunning visuals provide some sense of cosmic harmony beyond the human fracas. Is there a lesson to be learned here? Certainly, but one needn’t mine so deep to get a kick out of the movie, which is, as plainly as I can put it, a helluva lot of fun.