Famed arthouse director Paul Thomas Anderson’s films are known for their interesting scripts, sprawling cast ensembles, odd twists, and wonderfully off-beat characterizations, often bordering on playful caricature. Booming onto the scene in 1996 with his film Hard Eight (also known as Sydney in other parts of the world), a deep character study of a hitman and his interactions with a hooker and her boyfriend, Anderson would go on to write and direct the latter-day epics Boogie Nights and Magnolia, two films that saw America through his skewed lens. A lot of his characters seem to find their virtue or happiness as a direct result of their imperfections which come as a price of perfection, if you can dig that roundabout kinda thing. 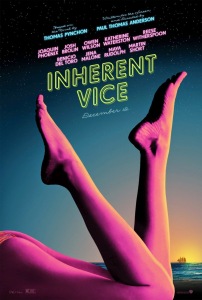 Author Thomas Pynchon’s 2009 novel Inherent Vice seems to be tailor-made for Mr. Anderson and the niche into which he’s settled himself nicely. Once again, a large ensemble unites to tell a very unconventional story that seems to be a cross between Roman Polanski’s masterpiece Chinatown and Rian Johnson’s quirky Brick, two detective films with different stories and approaches, yet very similar in feel. At the center of all these movies is a somewhat eccentric detective (or detective-like character) going about his job in his own peculiar way and getting results in as odd a manner as his methods.

Inherent Vice’s private detective, Larry “Doc” Sportello (Joaquin Phoenix), is less the Jake Gittes of Chinatown and more of a Jeff Spicoli from Fast Times at Ridgemont High; the guy spends a lot of time on the sofa in his beach house smoking dope and being an otherwise unproductive member of society. His friend Sortilege (Joanna Newsom) serves as our narrator who floats in and out of the story, alternating being on-screen to help us understand the plot and abruptly disappearing as soon as her narration’s finished. She’s the first person we see as she describes the momentous event that starts this wacky story chugging along: Doc’s ex-girlfriend Shasta (Katherine Waterston) has come to town, asking for his help.

Shasta’s involved with wealthy landowner Michael Wolfmann (Eric Roberts), whose wife Sloane (Serena Scott Thomas) has cottoned onto their tryst and is planning on overthrowing Michael and taking the money when it’s all done. With that, Doc’s strange journey begins, with all manner of idiosyncratic characters flitting about his sphere of consciousness in the familiar Anderson fashion. Sometimes, they’re here for a second, only to be proclaimed dead the next; sometimes, they serve as Chekov’s Gun (shown early, used later); and sometimes, they’re just along for whatever crazy ride Doc’s taking. 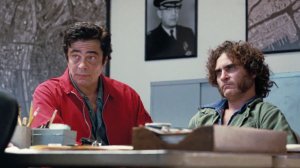 Throwing his weight around is detective heavy Christian “Bigfoot” Bjornsen (Josh Brolin), an official policeman with a badge, an intense dislike towards Doc’s methods, and a sort of jealousy in Doc’s ability to get results. Doc’s hilarious bewilderedness at the kind of actions Bigfoot takes to keep him underfoot make up a lot of the comic content of Inherent Vice, and their scenes together are built of great chemistry, but of a different kind – by not having chemistry. A ying-yang pairing like no other, this results in a lot of humiliation and pain at Doc’s expense; after all, what would you expect from a guy named “Bigfoot”? He’s definitely the Moe to Doc’s Curly, if we’re to think about it in terms of “The Three Stooges.”

Speaking of “The Three Stooges,” there does exist a kind of slapstick absurdity to Inherent Vice. For a film that’s supposed to be as serious as one would expect something from Paul Thomas Anderson to be, I laughed quite a bit at how completely weird things would get. Even a scene where Bigfoot’s beating Doc senseless has a huge undertone of comedy attached to it. It’s as if Anderson, with all his gravitas and straightforward drama, decided to insert an almost parody-like comedy into these proceedings, all the while keeping a straight face. He tends to let scenes breathe and be, sometimes staying a little too long on them, but that’s a lot of what gives Inherent Vice an oddly laid-back, I’ll-get-to-it-when-I-get-to-it kind of vibe. We’re almost made to feel as lackadaisical and lazy as Doc is on his couch, and we can only try to hold on when things get super strange… like when Martin Short appears out of nowhere as a coked-up dentist.

You see? It’s those kinds of late-game antics that Anderson gets up to that make Inherent Vice actually fun, once you realize that Anderson is making a gag comedy under his own rules. Just when you think you’ve seen it all, he goes and proves that you haven’t by throwing another cinematic curveball, throwing Inherent Vice out of the realm of a detective drama and straight into the realm of sendup. You can’t expect to do anything but laugh when you see the kind of people show up for the final drug deal and how they work it. Inherent Vice finds Anderson flexing his absurdity muscles and reaping huge benefits. No matter how all-over-the-place the story may seem, it all makes sense when you seat yourself firmly in Doc’s shoes and hold on for the ride.