Posted by Michael Parsons on November 21, 2014 in Movie Reviews / 2 Comments

A frigid, monochromatic biopic that hopes audiences will perceive dead-eyed gazes and painfully slow-to-materialize dialogue as Oscar-worthy material, “Foxcatcher” tells its story with virtually zero charisma. Indeed, the film boasts dramatic transformations for Steve Carrell and Channing Tatum, but it’s tough to tell whether accolades should be given to the actors or the prosthetics department.

Particularly if you already know how the story goes, the experience will feel pretty laborious. Tatum plays Olympic wrestler Mark Schultz, a world champion eager to ride his glory to another gold medal. When he’s called upon by oddball multimillionaire and wrestling enthusiast John du Pont (an almost unrecognizable Carrell) to train at a lavish facility on the du Pont family’s 500-acre spread in Pennsylvania, things appear to be ideal. That’s until du Pont, the self-proclaimed “Golden Eagle of America” (because he fancies himself an 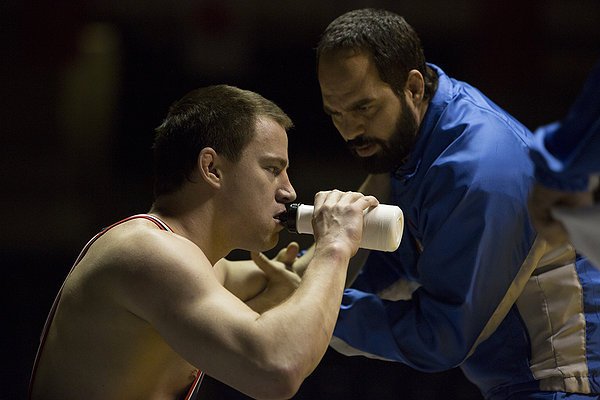 inspiration to the country), doesn’t get exactly his way; his megalomania and childlike whims begin to prove corrosive to Schultz’s career.

Performances are rigid and muted, except for Mark Ruffalo, who plays Schultz’s older brother and wrestling mentor Dave; he’s like the warm, gooey center inside a bitter hard candy. Vibrant and sympathetic (Ruffalo’s forte, though certainly only one component of his ever-expanding range), Dave is more of a father figure than a sibling, having raised Mark from a young age. But Dave’s good intentions are met with animosity when du Pont finally convinces him to uproot his family and lead the team (“Everyone has their price”, smirks du Pont) after du Pont’s relationship with Mark starts to deteriorate.

Though the film is plodding, credit must be given where it’s due. Tatum inhabits Schultz as if he were possessed by a bulldog, and his commitment to the role is admirable. A heartbreaking scene in a hotel room shows that there’s something more to the character than his lumbering demeanor suggests, as well proving that Tatum has the chops for some stunning dramatic acting. But when “Foxcatcher” is centered on the dynamic between Mark and du Pont (who strolls around the grounds like a dyspeptic Alfred Hitchcock), these two principal characters become very difficult to stick with. Carell, abandoning any trace of his typical persona, will make you squirm in your seat at first — somehow, for being so understated, the film manages to overstate just how yucky he was — but the character doesn’t evolve so much as his ugliness just wears thin. He’s portrayed  as a wildly delusional, increasingly unstable person who deep down is trying to win his mother’s approval (Vanessa Redgrave provides an extra layer of frosty smugness as the du Pont family matriarch), but consistently gets shot down. Regardless, his vast wealth allows him to do just about whatever he wants: at one point he procures a tank and throws a fit when it doesn’t come equipped with a 50-cal machine gun. 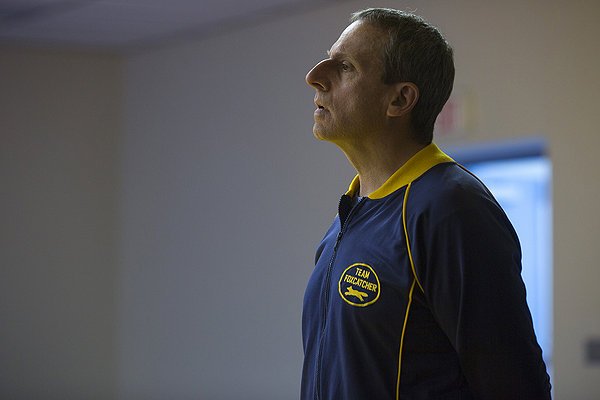 The actual events occurred in the ’90s, but the movie is set against the more superficial backdrop of the ’80s, ostensibly to accentuate du Pont’s excessive lifestyle and probably to make it feel a little more like a period piece (those short shorts really take me back to gym class). Like director Bennett Miller’s last film (2011’s pitch-perfect “Moneyball”), “Foxcatcher” is not a “sports” movie per se — but one would be remiss in not mentioning some astounding work on the wrestling mat by Tatum, whose athletic history makes him ideal for the role. Still, it’s not enough to give the movie much of a pulse. A positive is the supporting cast, which includes some good, if underutilized names: Sienna Miller has a small role as Dave Schultz’s loving wife, and it’s fun to see Anthony Michael Hall as du Pont’s personal assistant.

From a technical standpoint, “Foxcatcher” is a good-looking presentation: impeccably edited by Jay Cassidy, Stuart Levy and Conor O’Neill, and beautifully lensed by “Zero Dark Thirty” DP Greig Fraser, the audience is fully immersed in du Pont’s bizarre, ostentatious world, whether we like it or not. And if one were to glimpse at the script by E. Max Frye and Dan Futterman, it would appear that everything should fall in line, particularly with the talent involved. But the film’s few gripping moments come too late, well after the movie has reached its threshold for the arid material. It’s usually on Ruffalo to elevate “Foxcatcher” above monosyllabic conversations and long, agonizing lulls.