Posted by Michael Parsons on November 20, 2014 in Movie Reviews / No Comments

A good horror movie can feed endlessly on anticipation as long as it eventually has something to say. While director Rory Douglas Abel clearly appreciates suspense building, his shut-in psychological thriller “Phobia” is too reliant on mostly unseen sinister forces that never amount to anything coherent enough to justify the film’s multiple hints as to what’s actually going on. In doing so, Abel has accomplished the beginnings of a good drama that gets diminished by a half-baked ghost story. There are a few scares, but what the film ultimately resembles is a lengthy albeit thematically incomplete episode of “Tales From the Darkside” where the writers — in this case Abel and first-time feature scribe Matthew Barnes — don’t seem entirely sure of what kind of product they wanted to end up with. 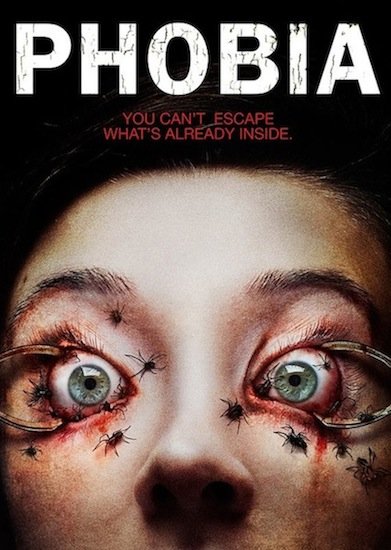 From its “Sixth Sense” aura to a tense and convincing performance from Michael Jefferson as the agoraphobia-stricken central character, “Phobia” initially shows promise and seems to be working its way toward a ghastly and inventive realization by the midway point. Mac, our grief-stricken protagonist, has visions of his wife (“Gut” star Sarah Schoofs) who was killed in an automobile accident a year earlier. Still unable to leave the confines of his two-story Brooklyn brownstone, Mac’s days consist of a tedious transcription job and frequent house calls from his shrink (Peter Gregus) and best friend Taylor (Andrew Ruth). And yes, the occasional spectral sighting.

But these freaky encounters get dismissed early and often, as I suppose we’re to think that Mac is sure that it’s all in his head. Scenes are quick to transition from images of his bloodied bride or the silhouette of a woman sprouting spider-like appendages and back to business as usual, unwittingly convincing the audience, at least for a spell, that we don’t really need to worry about anything.

Interesting and spooky at first (things seem closest to getting real when Mac confronts a crazy, knife-wielding trespasser), the film’s biggest revelation is that it doesn’t plan on forming anything concise out of its redundant and sometimes gimmicky scares. Instead, Abel settles for numerous similar scenarios in which the main character is provoked by the presence, whether it be supernatural or just his imagination. Usually it’s a tap on the shoulder for a good jolt — but guess what? Nothing there. That’s fine as an appetizer, but after the umpteenth time it becomes the main course. At one point, Mac laments that boredom is the worst thing about his condition, and I think that most audiences would tend to feel the same of this experience.

Marbled in with a thought-provoking commentary on guilt, depression and how trauma can skew our perception of reality, the scattershot horror elements in “Phobia” quickly whittle away at a premise that could have resulted in a more intelligent, precise, even heart-rending tale of loss and insanity (for that, see “The Babadook”). That said, Abel and cinematographer Mike Aransky work well in the tricky environment, as not everyone can effectively capture the atmosphere of such confined spaces the way it’s done here. Also to its benefit, the acting is superb, most notably from Jefferson who is likable and relatable; so is Emma Dubery as a young grocery-service girl who becomes attracted to Mac. If not for these strengths, “Phobia” might have just appeared as a middle-of-the-road supernatural thriller, but it’s because of them that the film’s shortcomings are that much more glaring. Don’t even ask about the cover art (included above), which has absolutely nothing to do with the movie.