Posted by Michael Parsons on December 4, 2014 in Movie Reviews / No Comments

Established in 1985 by ex-pilot and former “Wild Kingdom” host Stan Brock, Remote Area Medical was originally devised to provide care to areas of the Amazon rainforest where medicine was otherwise inaccessible. Jeff Reichert and Farihah Zaman’s “Remote Area Medical” centers on Brock’s operation in Bristol, Tennessee, a region that RAM’s scruffy 78-year-old founder says is “not too remote” but where people still can’t find or afford a doctor.

The filmmakers rub shoulders with some 2,000 folks camped out in the parking lot of the local NASCAR track that, for three days annually, doubles as RAM’s free clinic. The documentary humanizes a topic that we typically see getting volleyed back and forth by talking head politicians while the affected communities only appear as statistics on a chart.

Patients show up in droves to take a number, some claiming their place in line days before the event. Truckloads of medical equipment arrive and are unloaded by volunteers. About 600 people are seen a day, predominantly those in need of optical and dental care. We see the aftermath of more than a few tooth extractions.

Then there are the extreme cases to really put things in perspective. One woman who is seemingly unfazed when an x-ray reveals spots on her lungs says she’ll leave it in God’s hands and lights up a cigarette on her way back to the car.

Most of them are kind-hearted, optimistic folks who are grateful to be getting help. Their stories make for a rather distressing socioeconomic commentary: We hear about some of them scrapping work together piecemeal, barely able to get by as it is. One man resorts to street opiates to manage his pain. 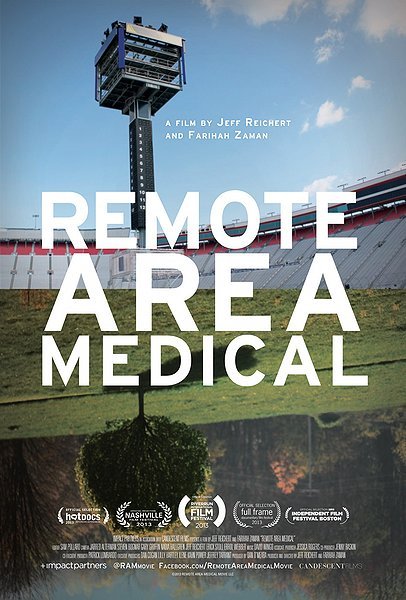 Another hasn’t had a check-up in 40 years. We see an understandably desperate woman attempt to surreptitiously get ahead in line because her mother is ill and she doesn’t want to lose her place when she leaves for her job in the morning.

During an interview, Brock recalls being asked by Ed Mitchell, the sixth man to walk on the moon, why he created RAM. Back in his “cowboy” days, Brock was badly injured in Brazil, and was informed that the nearest doctor was 26 days away on foot. Mitchell responded by saying: “Well, I was on the moon, and I was only three days away from a doctor”.

While RAM began in the Amazon, over half of their pop-up clinics now occur in the U.S. (the company is based in Knoxville). The organization runs entirely on donations and volunteers, and Brock, decked out like Evel Knievel, firmly and proudly states a few times during the event: “We always start on time”.

Reichert and Zaman’s microcosmic view of the U.S. health care crisis makes its point in roughly the first half hour, and they’ve purposely neglected to open their film up to the bigger debate. It puts real faces to an increasingly urgent situation instead of simply regurgitating the census, which is refreshing. But with many superior, more in-depth films on the topic out this year like “Code Black”, which follows doctors in the busiest ER in the country, “Remote Area Medical” would have been more enlightening if it had used Bristol as a launch point for exploring RAM’s broader impact on the system instead of spending the entire 80 minutes with just a handful of patients.

And who is this fascinating philanthropist who founded RAM? Where has this humanitarian crusade taken him over the last three decades? According to the UK’s The Independent, Brock quite literally lives at charity events and sleeps on the floor. We only get glimpses of this — probably how he prefers it — but by not delving further into this incredible endeavor, the film will leave some audiences (like me) feeling like they could have been better informed about what RAM does and why their work is more important now than ever. I think this could make a pretty compelling doc series.