Sin City: A Dame to Kill For

Frank Miller’s sprawling tales of Sin City (that’s “Basin City” with the “Ba” shot to hell on the road sign at the city limits) are constructed from the hard-boiled and the heartbroken. The sleazy and the sordid. The soulless and the virtuous. The righteous and the wicked. As Denzel Washington said in the film Glory, “Yeah, It stinks bad. And we all covered up in it too. Ain’t nobody clean.” In Sin City, no one gets out without a little dirt on them, if not shovelfuls of dirt. Miller’s graphic novels were composed of stark black-and-white frames, playing around with chiaroscuro to achieve the ultimate dark, brooding film noir look, where nothing much exists outside of the shadows and light. Very little color is used to tell these tales, if only to make sure the reader knows they’re looking at something meaningful to the plot.

Rebel filmmaker Robert Rodriguez championed this style when he and Miller co-directed the first adaptation of these graphic novels in 2005, titled simply Sin City. Opting to shoot digitally with green screens instead of sets, Rodriguez and Miller were able to use computers to give us the ultimate live-action comic book movie; it was almost as if the translation from page to screen didn’t take anything else but a camera to shoot it and actors to fill out the roles. The two used the original graphic novels for storyboards instead of drawing their own, literally taking images from the various novels and recreating them on film down to the last detail. To me, Sin City was a true comic book movie instead of a drama made up with characters from comic books, like so many adaptations are these days. 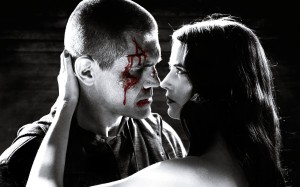 Rodriguez and Miller have returned to bring us Sin City: A Dame to Kill For. Preposition-ending sentence fragment aside, this new installment in the Sin City franchise has come roaring onto the screen with both guns blazing, with cigarette smoke wafting through the screen and into your nostrils. The directing team once again immerses us in the seedy, violent underbelly of Basin City, with all of its corrupt cops and politicians, its hookers with hearts of gold, its hulking brutes with blood on their knuckles, and the people caught in the middle of it all.

Vivid in its lack of color and its sharp contrast of dark and light, Sin City: A Dame To Kill For almost reaches the dizzying, mind-bending heights its predecessor gave us. However, there feels like a little bit of a lack of passion in the proceedings, as we are bounced from story to story with no real emotional hook or angle to keep us rooted – and to keep us rooting for the main characters. Maybe it’s because once we know who’s still alive and who’s not, we also know where they’re heading. The canon set by the first film sort of spoils some of the events of this film, which will make you start wondering how the timelines of the first and second movies match up. It’s kind of like trying to put Pulp Fiction or Memento back into chronological order, but doing this might make your head spin, so don’t think about it.

Instead, enjoy some of the new characters Sin City: A Dame to Kill For has to offer. There’s Johnny (Joseph Gordon-Levitt), a fast-operating, smooth-talking gambler on a fast-track to the biggest game in town: a no-limit draw poker match with Senator Roark (Powers Boothe), arguably the most powerful man in Basin City. Also of note is Ava Lord (Eva Green), a spider of a femme fatale – she draws men into her web to do her bidding, and when she’s done with them… well, you know what spiders do to things caught in their webs. Both Gordon-Levitt and Green provide exceptional performances, fully embracing their characters’ spirits and souls (or lack of them).

Returning are Marv (Mickey Rourke), who serves as a facilitator and agitator throughout all of the stories; the honorable Dwight (Josh Brolin), a private investigator trying to keep his intentions ahead of him and his demons at bay; and Nancy Callahan (Jessica Alba), the exotic dancer saved in the first film by police detective John Hartigan (Bruce Willis), whose ghost visits a now-tormented Nancy in her darker moments.

This film’s driving maxim seems to be that there is no good in Sin City, nor is there evil; there is only power. Sin City: A Dame to Kill For explores this theme with examples of the petty (the rich kids in the pre-credits scene torching homeless people), the seductive (Ava’s viselike grip on any man stupid enough to fall for her wiles), the physical (the many deaths and beatings shoved in others’ faces used as horrific examples), and the mental, most worthily exemplified by Johnny’s story, “The Long Bad Night.” It’s by far the most stinging story here, as it definitively answers the question: where does true power lie – in the physical world, or the mental? For all of the violence and death, is one only truly beaten in the mind?

Rodriguez and Miller saturate us with wave after wave of grime and muck, so much so that I could swear my clothes stank of cigar smoke on the drive home. It’s a celebration of the vile and squalid, with the hope that our heroes wind up on top. Well, “heroes” in the sense that these are the least offensive people to be found in Sin City; like I quoted earlier in the review, “ain’t nobody clean.” The film’s use of its natively-shot, literally eyeball-popping 3D mires us hip-deep in Sin City’s sludge- and blood-filled streets, almost drowning us in its atmosphere of near-apocalyptic urban decay. Sin City: A Dame to Kill For is a must-see on the big screen, if only to delight in one of the best comic book series being brought to expressive, two-toned life.