JACK
You can’t do this! This is New York!
Nobody lies in naked in a field in New
York… It’s… it’s too Midwestern.

PARRY
Come on, try it. Ya feel the
air on your body – ya little
fella’s flappin’ in the breeze…
Everybody in the city is busy
with their business and no one knows we’re
bare assed in the middle of it. Come on!

— The Fisher King, from the screenplay by Richard LaGravenese

Robin Williams.
The name alone means so many different things to different people. To some, it conjures an image of a nasally-talking man in rainbow suspenders who says “Na-nu na-nu!” a lot; others will recall a teacher in an all-male prep school impersonating John Wayne doing the “Is this a dagger I see before me?” speech from Shakespeare’s Macbeth; some will think fondly about how far into the depths of Hell he sank to save his wife’s soul; or it may be the Oscar-winning role that made him a father figure to many, including a confused genius who didn’t quite know what to do with his life.

He is all of these things, and a whole lot more. Robin Williams’ career took him to the highest of highs and the lowest of lows, often careening wildly down the roads his roles took him. Known for his kindness and humor, Williams became one of the world’s great comedic voices of the late 1970s and beyond. While the tabloids picked up the stories of his drug abuse and his marital problems, he gave movie audiences unforgettable performance after unforgettable performance, leaving it all to hang out there, like the “little fella flappin’ in the breeze” from the opening quote, which is what comes to mind when someone says the name “Robin Williams” to me. 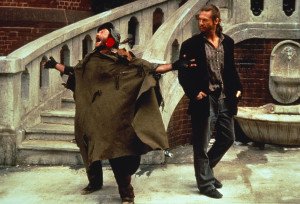 In this scene from The Fisher King, he’s taking ex-radio DJ Jack Lucas (Jeff Bridges) into Central Park in the middle of the night to do some “cloudbusting,” a mental exercise where you lie on your back and break clouds apart with your mind. However, they have to do it Parry’s way: totally naked. As we can see from the first quote, Jack’s a little resistant to the idea, but Parry’s already naked as a jaybird by this point. To me, this represents a lot of what Robin Williams was known for – for not just being standard, but a standOUT. He doesn’t hesitate in baring the soul with all of its joys and torments, and in all of his roles, he found many ways to make them so memorable, so tangible that we could feel the emotions he so ably displayed onscreen. Moments after this quote, Jack screams at Parry: “You are out of your fucking mind!” With the gusto and hilarity that only Williams could muster, Parry replies, “BINGO!!”

Many will, no doubt, point to his role as therapist/college professor Sean Maguire from Good Will Hunting as a touchstone role for him. After all, he won the Academy Award for his portrayal of a widowed doctor stuck in a community college with mouthbreathers who couldn’t care less about his incredible mind or their own capabilities. Rightfully so – this was the role that made a lot of people realize that he wasn’t just a funny comedian who used to be Mork from Ork. He was a man who used his craft and his art to weave himself into his various roles, with just a touch of the maniacal for which he was so well known. 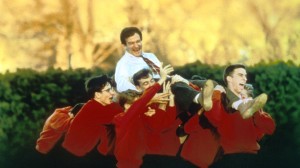 Others will definitely mention Dead Poets Society as the film for which he will be most remembered. Amongst a school full of stodgy, uptight teachers and students, his performance as the inspirational John Keating brought audiences to their feet and a tear to many eyes. Looking at the screenplay, it’s plain to see where he diverged from what was written, but he did so with a measured aplomb; he had to walk that line between identifying wholly with the boys he was teaching and being the adult he needed to be.

However, some of his lesser-known roles – a disgraced psychiatrist-turned-meatpacker in Kenneth Branagh’s Dead Again, a manipulative audio engineer in an episode of “Law & Order: Special Victims Unit,” a delusional film developer in One Hour Photo, and as a mysterious figure in Christopher Nolan’s remake of Insomnia – are where a lot of Williams’ talents truly shine. It’s easy to see how the majority of his roles are much more popular, as they all contain some element of Williams’ standup comedy. When he tones it down and puts the comedy on mute, he brings an intensity to a film that is seldom seen in this day and age. His eyes, once crinkled with laughter, now turn into windows for the tortured soul he may be playing, or they turn into angry mirrors reflecting our own rages and fears. 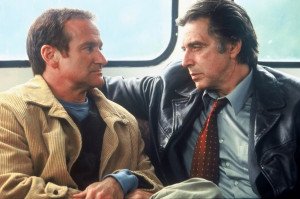 Personally, I remember everything – watching “Mork and Mindy” with my whole family, going to see Mrs. Doubtfire with my high school friends, dipping out on play practice to watch Aladdin at the (now-defunct) Union Station theaters, catching the Channel 5 broadcasts of The World According to Garp and Moscow on the Hudson, being brought to tears by What Dreams May Come, the enchantment of Hook while seeing it as a 15-year-old and as an adult, loving his cameo in To Wong Foo, Thanks For Everything! Julie Newmar, taking a break from recording in Blacksburg in 2002 and watching Insomnia with my guitarist, and most definitely his role as the harried father in The Bird Cage. Robin Williams ran the gamut between darkness and light, and it’s to his credit that he threw himself – body and soul – into everything that he did, making each performance undeniably extraordinary.

But let’s face it – he made the world laugh. Over and over again, he brought smiles to our faces and he kept us going back to the theaters for more. One only needs to look at his IMDb page and you can pick out a movie blindfolded that made you squeal with laughter. From his humble beginnings on “Happy Days” that led to “Mork and Mindy,” thus leading to a whole world of entertainment, Robin Williams made us smile and remember that the world isn’t such a bad place. The world now, however, is a little dimmer, now that one of its brightest lights has gone out. We’d like to thank you, Robin Williams, for the happiness you gave us while you were here.