Posted by Michael Parsons on August 12, 2014 in Movie Reviews / No Comments

Of all the problems with “The Giver”, its biggest might just be the timing. Though Lois Lowry’s 1993 novel preceded the “Hunger Games” and “Divergent” phenomena by over a decade, director Phillip Noyce’s big screen adaptation of it feels pretty late to the party in the wake of these recent and more popular young adult books making almost  instantaneous transitions from page to screen.

Going into the film, I tried to cleanse my palate of similar dystopian fantasy/sci-fi/love triangle franchises like the aforementioned, the success of which the Weinsteins are undoubtedly trying to capitalize on. In a nutshell, “The Giver” is mediocre. It has an interesting 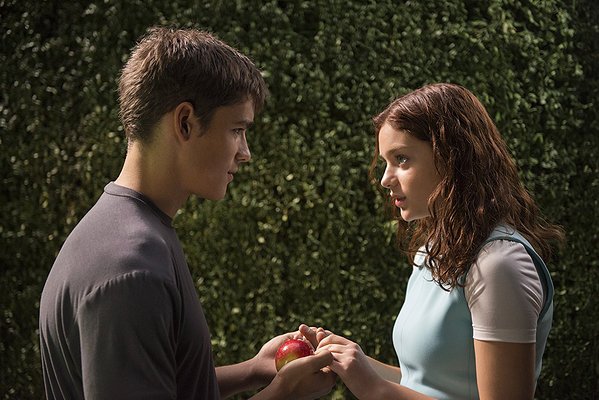 concept that feels rushed for a ninety-minute movie, the typical plot holes that you’d expect to be forgiven by its target demographic, and a supporting cast that all but vanish into the backdrop. Its script actually requires Meryl Streep, one of the greatest actors living today, not to act. But, since all but a few characters have no feelings (including hers), I guess we shouldn’t be expecting “Sophie’s Choice”.

The setting is a sterile, climate-controlled world where there’s no conflict, no pain, no hate, no lying. Also no love, no creativity, choice or expression. No identity — of any kind. They call it “sameness”. Unfortunately, one could say the same for the movie. Keeping this delicate balance in check: morning injections that numb the emotions, 24/7 surveillance, and language that makes people sound like androids (phrases like “comfort item” are used when referring to a pillow, and the children are regularly reminded to use precise language and to wear their assigned clothing). The people of the community, which is an expanse of mostly identical structures that rest atop a massive plateau surrounded by mysterious clouds, have no knowledge of the past, which we’re told was full of war, poverty and disease (presumably like our present). Babies are assigned to family “units”, and euthanized when unplaceable, though there is no understanding of “death”. Around the age of sixteen, kids are selected for their jobs in a ceremony where the Chief Elder (Streep) thanks them for their childhood and sends them packing.

Jonas (Brenton Thwaites) is special. He’s chosen to be the Receiver of Memories, the single person who will hold all the knowledge of the Secret History of the World in order to advise the leaders of the future (of course, the powers that be let him stand around like the last pick in the draft before announcing him as basically the most important person on the planet). Passing along this knowledge to Jonas is the previous Receiver of Memory — the  Giver– (played by Jeff Bridges, who also produced the film) a somewhat reclusive bookworm whose disdain for the system is not well-concealed, nor unwarranted. We soon find out why. 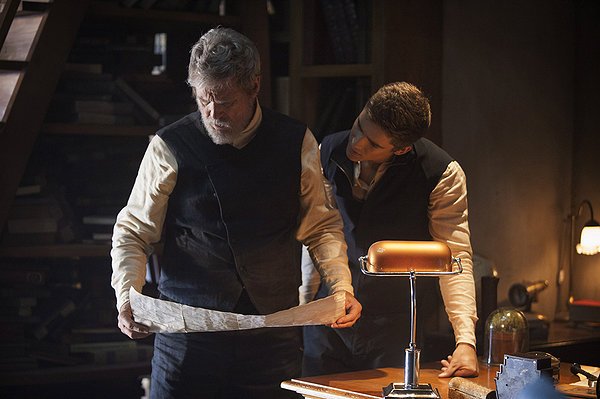 Once bequeathed with the duties of the Receiver, Jonas becomes exempt from his daily sense-ridding medications, and is permitted to lie, however and to whomever he sees fit. Having previously seen things like everyone else — in black and white, the way the first act is filmed — the colors burst forth to both Jonas and the audience for a striking contrast in tone after he enters the Giver’s domain. But stylistic elements like this are virtually ruined on a story that becomes so riddled with holes that it almost undermines the premise.

Jonas is forbidden from sharing any information with friends or family (his parents are played by Alexander Skarsgård and Katie Holmes), but that goes out the window once he starts blabbing to closest-thing-to-a-girlfriend Fiona (Odeya Rush) and best buddy Asher (Cameron Monaghan) upon discovering how wonderful it is to “feel”, and how wrong it is to be deprived of it. This causes friction between Streep’s one-dimensional Chief Elder (who appears mostly in hologram form, which is appropriate for the phoned-in feel of the performance), and Bridges’ conflicted Giver, who once had failed the system when revealing too much too soon to Jonas’s predecessor (Taylor Swift).

Jonas, too, gets a premature dose of reality when accidentally receiving visions of a war that he isn’t ready to experience (the Giver somehow transfers information to the new Receiver through touch), as flashes of the old world’s collective memory appear on screen like they’d been borrowed from the History Channel. Director Noyce (“Salt”) and writers Michael Mitnick and Robert B. Weide miss an opportunity to do some creative things with the back story of this well-disguised dystopia, while some potentially inventive ideas drift to the wayside.

On the up side: “The Giver” is well produced, often very nice to look at and doesn’t rely on violence to tell the story. A likable and commanding lead protagonist played by up-and-comer Thwaites (this year’s “Oculus” and “The Signal”), an intriguing character from Jeff Bridges, and some dazzling cinematography by Ross Emery are perhaps just enough to keep us invested in the story, if for no other reason than to see where it’s going to leave us for the next chapter. That’s also what makes it so frustrating.