Sometimes, it’s nice to a have a giddy, perfectly pleasant surprise of a movie, and Le Chef (originally titled Comme un Chef) by Daniel Cohen is exactly that. Some of the thematic material (and one character in particular) reminds me a lot of the Disney/Pixar film Ratatouille, which I also appreciated immensely. This is a movie that won’t necessarily make you guffaw with explosive laughter; instead, you’ll be smiling sweetly, chuckling delightedly, and enjoying a movie for a movie’s sake. This movie doesn’t waste time with frivolity, with Cohen using a chef’s efficiency to give us a lean, flavorful delicacy of a film.

Le Chef’s two leads spend their time trying to divine what’s more important in their lives while balancing their work as chefs in a three-star restaurant. Jacky (Michaël Youn) is a chef with an ambition greater than the restaurants where he cooks; he seems to be routinely fired from various chef’s positions for trying to elevate his customers’ cuisine choices. One such scene involves him bringing out an upscale menu in a downscale workingmen’s pub, getting dismissed with jeers from not just the customers, but from the manager as well. All of this happens much to the chagrin of his pregnant girlfriend Beatrice (Raphaëlle Agogué), who enjoins him to take a position as a handyman at a nursing home to help make the ends meet. 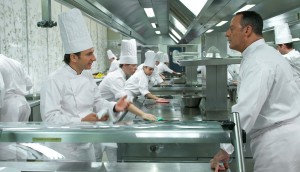 Meanwhile, celebrity chef Alexandre Lagarde (Jean Reno) has a problem: either maintain his three-star rating, or lose his position as the head chef at Cargo Lagarde, one of Paris’ most noteworthy fine dining establishments. Not making matters any easier is Stanislas Matter (Julien Boisselier), the CEO of the restaurant chain who’s intentionally setting Alexandre up to fail in order to make room for a new, hot chef’s trendy molecular cuisine. In addition to that, Alexandre’s daughter Amandine (Salomé Stévenin) is complaining of his neglect, especially now that she’s about to defend her master’s thesis. With all of this, Alexandre’s inspiration is failing, and his ability to come up with a breakout Spring Menu is in doubt.

While on a visit to his mentor in a nursing home, he tastes a soup that he recognizes as his own recipe, which reignites his passion for the classics. According to Alexandre’s father, there’s a guy named Jacky who’s suddenly improved the food for everyone, with the residents clamoring for more. There’s only one thing for Alexandre to do: get Jacky to work for him.

The entirety of Le Chef is a farce, with memorably funny gags and jokes. However, what’s to be noted is the overall sweetness of the movie. There’s not a lot of conflict, and things get a little too happy-happy for my taste, but it’s a sweetness that you can’t shake. Personally, I’m grateful for it; the last five movies I’ve reviewed were serious affairs, with a lot of darkness and distaste. Cohen keeps Le Chef in the light (no pun intended – there are very few nighttime or dark scenes), almost as if to accentuate the positivity of his film. He doesn’t let the more serious themes – familial neglect, old vs. new, traditional vs. trendy – bog the film down; instead, he uses them as ingredients to buoy the film. 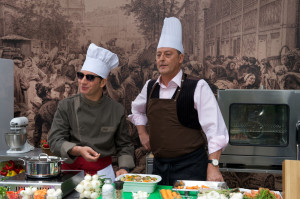 Jean Reno, known more for his serious roles in fare like Leon: The Professional and La Femme Nikita, flexes his comedic chops here and creates a wonderfully and humorously flawed character in Alexandre. He plays him mostly straightforward and serious, with the script being the only indicator of how absurd his character is. Likewise, Michaël Youn plays Jacky with an eager innocence, with a touch of mischief, whether intentional or unintentional – his most hilarious scenes are an ill-fated Skype call and where he’s called upon to participate in Alexandre’s cooking show, and that’s where that mischief comes into play.

One of the film’s largest themes is the traditional versus trendy or new. “Molecular cuisine” is definitely kicked in the shins, showing it off as pretentious and snooty, with the working class traditional dishes being shown as superior and worthy. After all, why would they be so popular if they didn’t stand the test of time? Alexandre and Jacky have to come to terms with the changing world, its flavors, and its preferences, but can they do that without feeling like they’ve sold out? It’s a hilarious journey to see if they do or not, and it’s one that I highly recommend taking.

In French with English subtitles. Starting 7/25 at the Angelika Pop-Up in Union Market.