Posted by Michael Parsons on July 25, 2014 in Movie Reviews / No Comments

Luc Besson has already written/produced two mediocre action films this year  — “Brick Mansions” and “3 Days to Kill” —  but it’s his directorial effort “Lucy” that is the most surprisingly terrible of the lot.

Scarlett Johansson plays the title character, a vaguely intemperate American living in Taiwan who, against her will, ends up being used as a drug mule to transport a highly potent substance that’s been synthesized from a chemical naturally produced by pregnant women. When a bag of the drug bursts inside her stomach after getting kicked around by a couple of goons, Lucy starts to gain access to parts of her brain thought dormant in most humans. This is according to the myth that we only use 10% of our brains, on which renowned Professor Norman (Morgan Freeman) bases his entire scientific thesis. 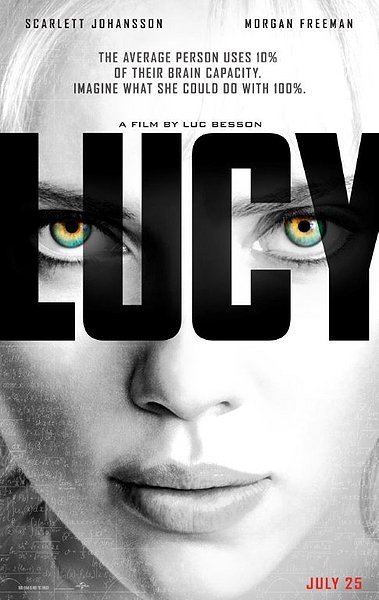 It starts off with a promising villain, played by Min-sik Choi, and a vibe as nasty as the film he’s most famous for, the original “Oldboy”. His is a thoroughly unpleasant character who quite literally has blood on his hands when we first meet him, having brutally murdered someone in an adjacent hotel room.

But his role is deceptive in that it is ultimately insignificant. Because no matter how malicious and ruthless and scary he is, he and his endless supply of henchman are never going to be any match for the super-heroine that he’s inadvertently created out of Lucy.

Apparently, the increased brain function caused by the drug (called CPH4) turns a regular person into a hybrid of Neo from “The Matrix” and Johnny Depp’s character in “Transcendence”. Neither comparison is a worthy meter of Johansson’s ability as an actor, nor is this film: Just in the last six months, we’ve experienced her as the sultry but sensitive voice behind an artificial intelligence program in “Her”, an ominously demure man-devouring alien in “Under the Skin”, and an operative ironically reminiscent of Besson’s “La Femme Nikita” in “Captain America: The Winter Soldier”. Each a challenging role that shows a different aspect of the actress’s ever-broadening range.

This one is not, and the deficiency can be chalked up to Besson’s script. The first act promises a much better film, with shades of Oliver Stone’s mid-’90s fixation with metaphorical footage (here cheetahs preying on a gazelle) and a skeevy kind of “True Romance” setting, if by way of a Korean crime thriller. But when Lucy starts gaining her powers is precisely when Johansson ceases to be interesting, as any shred of her briefly developed personality evaporates completely. Transforming from a scared-stiff young women caught up in a nightmarish situation to an unstoppable robot devoid of any and all expression, she’s confined to a one-note role in a one-note film that never really makes sense of itself or her character.

Besson’s movie doesn’t unfold as much as it pulsates, flickers and surges its way to an ending point. As Lucy’s new-found super-intelligence quickly expands, she graduates from devouring thousands of pages of research and learning Chinese in mere seconds to reading minds, manipulating matter and eventually transcending space and time. Her senses and memory are hyper-acute, to put it mildly; she begins to sees things in terms of heat signatures and bands of energy that stream across the screen like a malfunctioning ticker tape. The world has become her iPad, and everyone else is just living in it.

As Lucy grows more powerful, “Lucy” gets weaker. It’s contradictions and inconsistencies are too many, as the supporting cast become less and less relevant to the plot, until they’re not really necessary at all. Freeman’s character is only around to explain the rules of the game as he lectures on evolution and the human brain, and later as the only person that might be able to help Lucy out of her predicament.

Unneeded support includes a Parisian policeman (Amr Waked) who falls into the easy role of sidekick without asking too many questions about Lucy’s unusual ability to suspend people in the air, stop bullets and make computers work faster than their processors would ever allow. He sums up the film’s biggest problem himself: “I don’t think I can be of much help to you”, after she incapacitates a dozen armed men without moving a muscle. Boy, is he right. But he goes on to shoot it out with a bunch of gangsters anyway, even though Lucy could have vanquished them with a light sneeze and sent him safely back to the station to fill out the paperwork.

Gun battles and car chases are inserted to ensure we get enough action in our action flick (while we’re on the subject, there’s nothing particularly special about the choreography), but what “Lucy” really begins to look like is a gangster film awkwardly trying to fit its way back into a quickly dwindling sci-fi premise. A kiss between Lucy and the cop reminds us that she’s still a human being, since she hasn’t batted an eye for 45 minutes and we really have no idea who she is as a person (though instead of simply levitating something when asked to demonstrate her power, she chooses to remind a man of the horrific death of his daughter, if that’s any indicator). The film is so utterly monotonous that clichés like this barely even register.

After watching the amorphous blob of a conclusion, one might wonder if this would have turned out exactly the same way if Lucy had simply decided to jet off to the Bahamas with the rest of the drugs for some R & R. “Lucy” flirts with the idea of a merciless revenge movie, but Johansson’s character is too sidetracked with being omnipresent to care much about retribution. Through her blank stare, we’re to understand that she has such complete control over her body that she chooses not to feel. Or maybe she feels too much. I don’t know. I also became too sidetracked to care much, as Lucy’s brain capacity rockets to 100%, and it all becomes a giant metaphysical mess.