And so our summer movie season begins not with a whimper, but with a bang, as director Bryan Singer returns to helm the latest in the franchise he started back in 2000 with the first film in the X-Men series. This installment, X-Men: Days of Future Past, intertwines the canon set by the first three X-Men films with Matthew Vaughn’s 2011 surprise, X-Men: First Class, bringing past and future versions of our favorite X-Men together in order to fight a battle they’ve been fighting since the first film: trying to secure a place in society for mutants.

It can be said that the larger metaphor at work is always going to be those that differ from us – be it through disability, gender, sexual orientation, race, or color – and how they are to fit into our society as we know it. The first X-Men film dealt with the mutants finally making headway towards societal acceptance, albeit with a stigmata not seen since Nazi Germany; X2 warned of weaponizing the mutants for military use; what Brett Ratner was trying to say in X-Men: The Last Stand is beyond me. This is where the franchise started leaning more towards entertaining than making a subtle point. 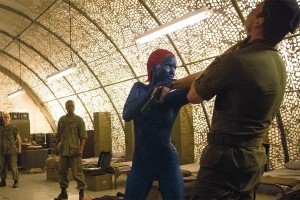 What’s being said in X-Men: Days of Future Past? Besides the salvation of a tortured soul, not much. It seems that X-Men: Days of Future Past serves as a bridge AND a stepping stone simultaneously. The film doesn’t sink under heavy-handedness, nor does it really get so cerebral. Instead, it’s an entertaining, diverting setup of a new continuity that sort-of involves the X-Men as we knew them from films past. But let’s back up just a little.

Once on opposing sides of how to help mutants join society, Dr. Charles Xavier (Patrick Stewart) and Erik “Magneto” Lehnsherr (Ian McKellen) have joined forces somewhere in the canon. In The Wolverine‘s mid-credits “stinger,” we see Xavier and Magneto approach James “Logan” Howlett (Hugh Jackman) – that’s Wolverine, to you folks – in a world that looks no different from the one we live in currently, asking him to join them to combat “a weapon that could bring about the end of our kind,” Magneto says.

If this scene is to be believed, the planet gets thrown very quickly into chaos, with the mutants on the run from Sentinels, an indestructible robotic hunter-killer that can gain the power of any mutant it fights. Beginning on an Earth that looks like the worst parts of The Terminator‘s future apocalypse and The Matrix‘s wastelands, we find that the world has gone seriously awry. Mutants and their homo sapien sympathizers have been rounded up into ghettos in dessicated cities, systematically separated and eliminated from the world at large. 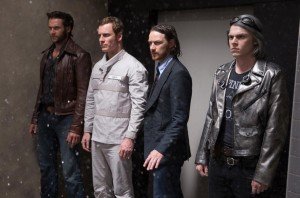 Xavier has a plan to fight back, but it involves sending someone’s consciousness back through time in order to stop shapeshifter Mystique (Jennifer Lawrence) from assassinating the very creator of the Sentinels, Bolivar Trask (Peter Dinklage), whose death assured the creation of these machines. As Wolverine has the necessary self-healing capabilities, his present mind jumps into his body in 1973, when he still had bone claws instead of a skeletal structure fused with adamantium. The mission? Get the younger versions of Xavier (James McAvoy) and Magneto (Michael Fassbender) to bring Mystique back from the dark side.

From here, X-Men: Days of Future Past is a very even mix of action, humor, and good old-fashioned event filmmaking. Which, unfortunately, includes lapses in logic. Several scenes had me shaking my head a little as I tried to follow the thought processes behind certain decisions the screenwriters and director have made, along with how everything we see is going to fit into the filmic canon. Forget how it’s going to fit – X-Men: Days of Future Past is a complete retcon of everything that’s come before. (“Retcon,” short for “retroactive continuity,” is a term somewhat pejoratively used when writers essentially forgo established canon in order to bring you new storylines.) It may not be as smart as the first two movies in the series, but it’s enjoyable to watch.

Much like J.J. Abrams’ 2009 Star Trek, we seem to be headed in toward an alternate universe where both the continuities established by the 2000-2006 X-Men films and X-Men: First Class can exist alongside each other without trampling legacies. Even though the spectacle that is X-Men: Days of Future Past is fun, there’s not too much in its head, as it seems to only want to set us up for the next entry in the series, X-Men: Apocalypse. The post-credits scene will make sense to hardcore fans of the comics, but will cause confusion in others. For all my quibbles, X-Men: Days of Future Past is a welcome return to the series by Bryan Singer, who makes this installment feel as good as slipping on a comfortable pair of shoes.