Posted by Michael Parsons on May 29, 2014 in Movie Reviews / No Comments

“The only thing that ever got in crime’s way were the criminals”.

Stone-faced crime boss Theresa James (R & B artist/actress Tia Dae) delivers a lengthy allocution on criminal behavior to Marcell (Dominique Spencer), an underling who has unknowingly been caught with his hand in the proverbial cookie jar. Her words are wise, even poetic, though it seems like an awful lot of wisdom (and creativity) to waste on someone who’s about to get waxed. “Welcome to your future,” she says as he meets his demise. 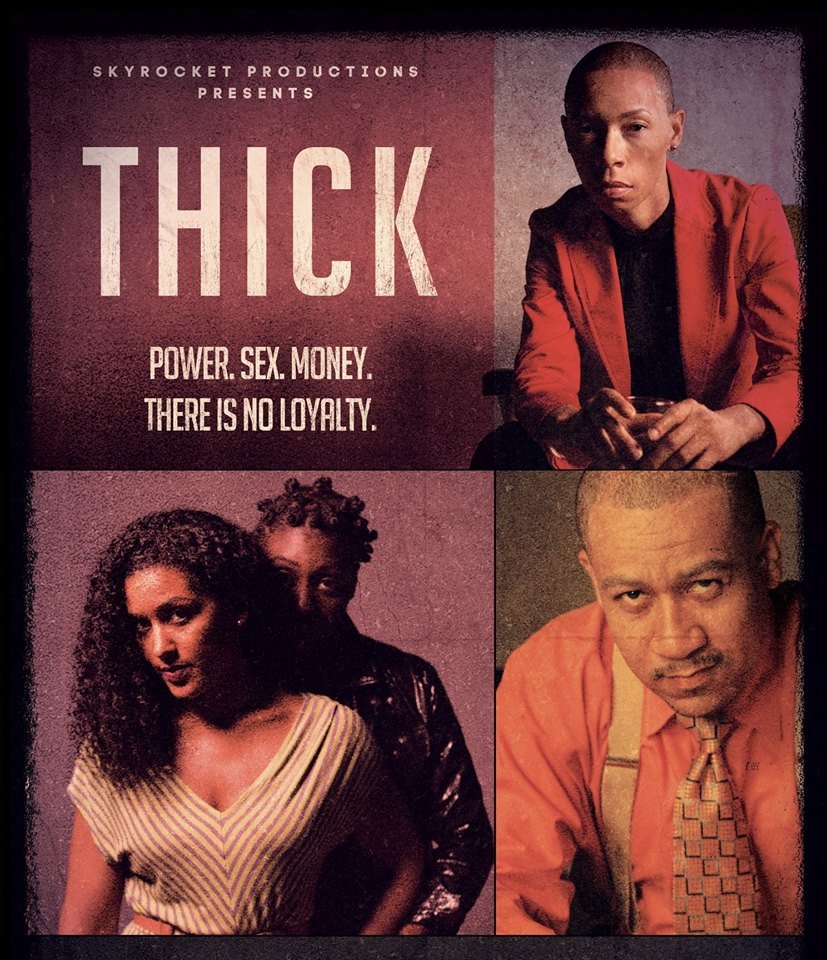 It’s to be expected, I suppose. These guys never seem to pick up on insinuation, even when they know they’ve messed up (an exception would be the guy from “Lethal Weapon 2” who wanted to make sure he wasn’t standing on plastic when summoned into the boss’s office). And almost invariably, the turgid speech that precedes their punishment serves only to emphasize the unhealthy ego of the speaker – often an overblown or cartoonish villain with little substance to their words.

If “Thick” starts off looking a touch self-important, it quickly finds its equilibrium within the stage-worthy performances and a script that has something to say. Dae’s monotone Theresa is less sinister than pragmatic, possibly a metaphor for the country’s pre-occupation with work and financial stress, among other things. She fits the bill as the steely-eyed crime boss, virtually disconnected from anything that might distract her or expose a weakness. Her position, as we see, is a precarious one, and somewhere beneath the virtually expressionless demeanor lies a deep-seated paranoia, which bubbles over when her wife Roni (Pascale Piquion) shows even the slightest hint of independence.

The film is part “The L Word”, part “King of New York”, and Dae’s character, who is both protagonist and antagonist, owes a little something to Christopher Walken’s Frank White, who occasionally liked to unload his intellectual side on a disloyal employee or two before burying them with their betrayal money. But this ain’t the ’80s, and a relatively meager $500,000 in “get out” money stashed in Theresa’s house suggests that times are tough, even for less legitimate business enterprises.

Scheming employees, dirty cops, and a deteriorating personal life are part of this nasty equation. Trusted advisor “Lefty” Eggleston (Ronald Benson-El) plots to take over the empire while assassin Nina (Chaseedaw Giles) plans to run off with Roni , with whom she’s been having an affair. And the crooked detectives in Theresa’s pocket (Caleb Jackson and Mick McGuire) are looking for an early out, and a hefty retirement package to boot.

It might sound like it’s gearing up for a finale like “True Romance”, but “Thick” is definitely more chess match than bloodbath. The characters, though, are no less cut-throat than in more violent contemporary urban crime dramas. Save a few requisite executions, which are carried out in shadowy Washington, DC area settings like a sewer tunnel or in the back seat of a car, we mostly watch our characters manipulating their way to what they want. Local writer/directors Cheryl Brown and Anthony M. Greene (“The Henchman’s War”) have crafted something that looks like a CliffsNotes for an HBO drama series, tightly cinched in a 70-minute package. The micro-budgeted “Thick” covers a lot of ground while never appearing overly ambitious, with fine editing by Omar Juarez (who is also the cinematographer) and Manuel Santos. There are many earmarks of a great crime saga here, and it will be interesting to see if Brown and Greene revisit the material.