A Million Ways to Die in the West

(There is a post-credits scene in the movie that is an extension of the final scene in the film. Stick around, ’cause it’s kind of funny.)

I’m sensing a common theme in “Family Guy” creator Seth MacFarlane’s two theatrically-released films: both Ted and the newly-released A Million Ways to Die in the West center on two very insecure men trying to make their way in the world with stunningly gorgeous women by their sides. Ted featured a man whose talking teddy bear kept him in a state of arrested development, while A Million Ways to Die in the West focuses on Albert Stark (MacFarlane in his first live-action starring role) and his life as a jilted lover in the wild Arizona west of 1882.

Albert, his heart recently broken by his girlfriend Louise (Amanda Seyfried) after she leaves him due to his cowardice, finds himself in a peculiar friendship with Anna (Charlize Theron), a woman who’s just come into their small town with her brother Lewis (8 Mile’s Evan Jones). What Albert doesn’t know is that Anna is a member of a gang of bandits, headed by Clinch Leatherwood (Liam Neeson), “the most notorious gunfighter in the territory,” who happens to be Anna’s husband. As luck would soon have it, Albert finds himself in a precarious circumstance with Louise’s new love, the rich, snobbish, and petulant Foy (Neil Patrick Harris), the owner of a moustache care shop. Having agreed to a gunfight in one week, Anna teaches Albert how to shoot, and in doing so, also teaches him how to be a man. Of course, as things go, you’re just waiting for Clinch to show back up… and when he does, everything goes to hell. 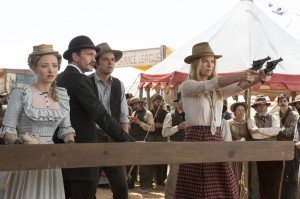 There’s a lot of give-and-take with A Million Ways to Die in the West. Firstly, you have to reconcile yourself to the fact that MacFarlane and frequent “Family Guy” collaborators Alec Sulkin and Wellesley Wild are writing an Old West screenplay with modern lingo, so you’re going to hear a lot of juvenilely-used foul language and phrases that seem completely out of place for the time. This isn’t Rio Bravo or The Good, The Bad and the Ugly – this is the Old West as brought to you by the guy who sang “We Saw Your Boobs” at the 2013 Academy Awards.

Second, you’re going to have to admit something to yourself: this is MacFarlane’s attempt at making his own Blazing Saddles, almost right down to the color of the opening credits’ lettering, and it’s almost as if he wants to match Mel Brooks beat-for-beat on a satirical and subversive level. Does he do it? Not quite. He comes close, but there’s something forced and shoehorned about some of his comedy, whereas the Blazing Saddles screenwriters had a way of letting each beat unfold naturally. (The aforementioned post-credits scene almost directly lifts from a very memorable line from Blazing Saddles, as if to make a point of its influence upon the preceding film.)

For instance: do we really need to hear Stark and Anna go on and on comedically about racial and religious backgrounds ad nauseam during a heartfelt moment? No. However, it’s to be expected, as heartfelt moments don’t exist in a Seth MacFarlane film; such scenes have to be tempered by some kind of attempt at undermining the seriousness or sweetness with a joke. Also, the use of bodily fluids in a scene between Edward (Giovanni Ribisi) and his hooker girlfriend Ruth (Sarah Silverman) feels completely out of place, with the resulting payoff of the gag being slightly funnier. It’s these kinds of jokes that seem to slow A Million Ways to Die in the West down, and MacFarlane and company sometimes have a tough time revving it back up to running speed. The overuse of foul language – something that never fazes me – actually bothered me a bit, as if MacFarlane relied on it a little too much, to the point where it just wasn’t shocking or funny anymore.

However, like a lot of MacFarlane’s comedy, you’ll find that the laughs come easy and loudly at some jokes, and other jokes or gags crash and burn by being either overexplained (a staple of MacFarlane’s work) or just not funny. Thankfully, this isn’t one of those movies where all the good bits were in the trailers; there’s a good amount of mirth to be had, even with the trailer bits, some of which have been redone for a different attack. I’d probably say that you’ll be laughing at about 50% of the jokes, while the other 50% will probably be met with “Aw, did he have to go there?” or dead silence. Well, you know what they say – if you throw enough mud at the wall, some of it will stick. 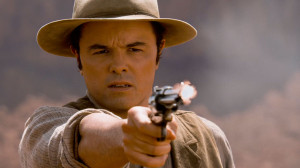 A Million Ways to Die in the West is not to be taken at all seriously, and the actors seem to be game for it. High-powered actors Theron and Neeson play themselves up well, with Neeson almost parodying his hardass characters from films like Unknown and Taken. MacFarlane is fairly affable, playing the lovable-yet-cowardly mensch; truth be told, I was quite surprised by a scene in the latter half where he flexes his dramatic chops and plays it very convincingly. But the real star is Michael Barrett’s cinematography; the sweeping shots of Arizona’s Monument Valley that open the movie are only a hint of the kind of vistas and grandeur this movie very  slyly contains.

While you have to take equal parts good with the bad, it’s not very often that a movie has the guts to deliberately aim and miss. Most either aim for the stars or shoot for the gutter; A Million Ways to Die in the West walks – and stumbles frequently – upon that line between good and dreck, and unapologetically so. Any fan of “Family Guy” or other works by Seth MacFarlane should be satisfied with this sophomore – and sophomoric – outing. MacFarlane’s first live-action lead role doesn’t disappoint, and his chemistry with Theron more than carries the movie well. Honestly, I liked A Million Ways to Die in the West when it was good and grimaced when it wasn’t; hence, the middling rating. I had a good time at this movie, just not as much of a good time as I expected.

P.S. Any film nut worth half his/her salt should be very irked by a certain cameo that happens about halfway through the movie. Hint: A Million Ways to Die in the West takes place, as the opening script claims, in 1882.