Taking a page from the book of what not to do with a horror picture, director Mike Flanagan seems less concerned about being an innovator in the genre than he is about learning from the mistakes of filmmakers who’ve butchered some potentially creepy concepts in the past. In a category where it’s almost impossible not to be derivative in some way, shape or form, he’s made the shrewd move of fine-tuning where many others have dropped the ball instead of simply upping the shock value. 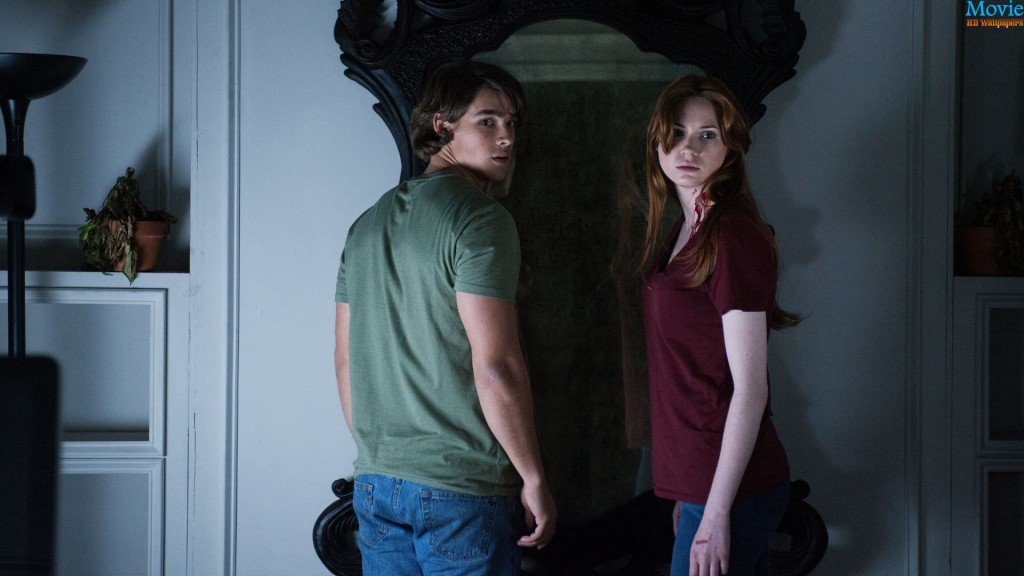 In “Oculus”, Flanagan creates an atmosphere loaded with potential scares that he only takes advantage of a handful of times, the anticipation itself being the most frightening aspect of it all. The film might not resonate quite the way last year’s “The Conjuring” or 2012’s “Sinister” did, and it does have its faults, but it’s an intelligently designed, often chill-inducing possession flick that improves greatly upon the basic “Amityville Horror” concept, exploring the psychology behind it to an often disorienting degree and posing questions that most of its kind either avoid or overlook.

Siblings Kaylie (Karen Gillan) and Tim (Brenton Thwaites) reunite in the suburban house where supernatural occurrences resulted in the deaths of their parents (Katee Sackhoff and Rory Cochrane) eleven years earlier. 21-year-old Tim, who’d been forced to shoot his father in self-defense on that fateful night, is now fresh out of a psychiatric facility, careful to protect his recovery, as the doctor reminds him to do, but is also eager to see his sister. Tim believes that what happened to their family was the result of a bad marriage, a case of domestic abuse, and as traumatic as it was, nothing more than mental instability. 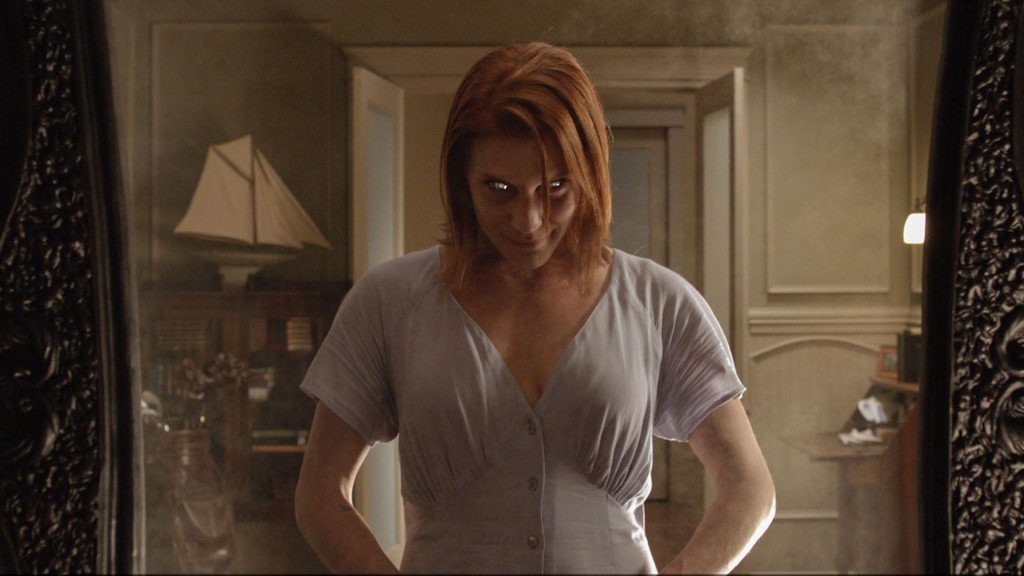 Kaylie, however, is convinced that the ornate 400-year-old mirror that hung in their father’s home office over a decade prior was responsible for their deaths as well as the gruesome demise of some 43 other people who’d owned it over the centuries. Tracking the antique down through an auction house run by her fiancée Michael (James Lafferty), she talks her brother into helping her destroy it (a pact they made right before Tim was sent away) in the very same home where it all happened.

The story is told in two concurrent timelines, as the gruesome events from eleven years prior unfold (with Annalise Basso and Garrett Ryan in the roles of young Kaylie and Tim), while over the course of one evening in present day, Kaylie intends to prove that her brother was only defending himself when he killed their father.

Having outfitted the room with computers, alarms, cameras and a number of failsafe devices that would put “Ghost Hunters” to shame, Kaylie unloads everything  she’s learned about the mirror from her research, including photographic evidence that everyone who’d ever owned it had died in very unnatural ways (dying of thirst in a bathtub, hammering them self to death, etc.), as well as connecting them to the telltale signs of impending possession (dead plants, sick animals, and flickering electricity).

Kaylie gets her precautionary devices in place (hourly phone calls from the fiancée, alarms to remind them to eat, and her final emergency measure, a massive Danforth anchor secured to the ceiling and set to a timer that will swing down and destroy the mirror in case their faculties become compromised) and begins baiting the mirror, hoping to capture something supernatural on video. When nothing initially happens, Tim believes she’s delusional, arguing that their father was psychotic and that she’d created a story in her mind to protect herself from the truth, while Kaylie thinks that he’d been brainwashed in therapy and blocked out what had really happened that night.

When things eventually do start happening, beginning with – you guessed it, dead plants and flickering lights – Kaylie is prepared. At least she thinks she is. Signs of possession start, and before long, they’re undermining their own plans, hallucinating, blacking out and doing one thing when they think they’re doing another, “Blair Witch: Book of Shadows” style.

Flanagan manages to avoid most of the traps that are so easy to fall into with haunted house films. Smartly interweaving present day with the past, the film gains intensity without having to do much else than remind us that we’re about to see something horrible, but without being sure of their fates as adults, or even if what they’re seeing is real. That in and of itself could have been problematic with a director less in control of his story, and even though it gets a little convoluted as the timelines converge and eventually overlap, Flanagan and co-writer Jeff Howard keep things tightly wound.

While some audiences might look for more cheap jolts than are offered here, “Oculus” has its share of in-your-face scares, but most come from “did you see that” moments and a score so eerie that the film would be intense even if there were nothing else to it. It’s not a movie that’s desperate to please horror fans necessarily, foregoing  gore (but graphic enough when it needs to be), focusing more on creative ways to tell the story. Bottom line is that “Oculus” is a solid entry in mainstream horror, and if we don’t see a scarier flick hit cinemas in 2014, I’d say the genre has still had a pretty good year.