The hype surrounding director/co-writer Mike Flanagan’s Oculus had me believing it was going to be a thrill-a-minute scarefest from which there was no return. After watching the film, I came away from it with a greater appreciation for its storytelling. It wasn’t a “so scary, I jumped out of my seat” kind of film; instead, it’s more of an eerie, menacing meditation upon how our childhood memories of incidents that affect us so greatly as adults.

Mixing elements of The Amityville Horror and Mikael Håfström’s woefully underrated adaptation of Stephen King’s short story 1408, Oculus plays with our perceptions of reality and time. Its conceit seems straight out of something King himself could have written: an antique mirror that has wrought death and destruction through the ages has found its way into the hands of those willing to end its evil legacy. Of course, the chaos surrounding the mirror is written off as purely circumstantial and can be seen as such, but we know better. 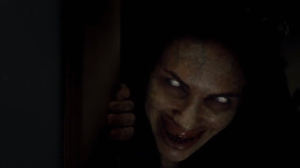 Eagerly awaiting the mirror’s destruction is Kaylie Russell (Karen Gillan), a woman who’s placed herself in a position at an auction house for the express purpose of locating this mirror (known as the Lasser Glass) after it made her and her brother orphans 11 years prior. Her brother Tim (Brenton Thwaites), having just been released from the mental institution where he’s been since the “incident,” reluctantly assists Kaylie on the strength of a promise they made when they were children – that they’d come back and “kill it.”

80% of the film takes place in their childhood home, with the timeline jumping constantly back and forth between the present and the incidents that occurred 11 years ago. And here is where Flanagan’s technique is flawless – in order to make us as discombobulated as Kaylie and Tim, we’re thrown headfirst into transitions with no warning, disrupting any kind of complacent predictability with the film’s flow. One minute, we’re staring at the present-day mirror in a whitewashed room with video cameras and computers surrounding it; the next minute, we’re staring at the same mirror, but with warmer tones and books on the shelves on either side.

That’s not to say that Oculus isn’t somewhat predictable; on the contrary, once the film’s setup is in place and the power of the mirror is fully realized, there’s no way you can think that this is going to end pleasantly or triumphantly. It’s almost as if Kaylie has taken Tim on the ultimate fool’s errand, and they’re getting exactly what she expects: power outages, loss of time, hallucinations, and evidence that a sinister power has set up shop and fired up the power tools. However, that’s one of the film’s strengths, and kudos to Flanagan for taking the path least chosen – there are surprises and very unexpected twists that this story takes, breathing an original air into what could have been just a standard haunted-house story. 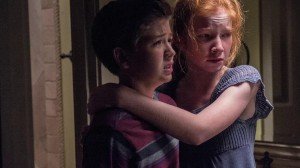 At the heart of it is the relationship between Kaylie and Tim, both as adults and children (played by Annalise Basso and Garrett Ryan). Oculus is told strictly through their eyes and ears, with only one flashback scene (to my recollection, at least) being outside their direct view. It keeps in line with the film’s theme of memory being the unreliable narrator, no matter how fervently we try to hold on to the childhood memories that some of us so greatly cherish. This happens to all of us – we all remember things being bigger when we were children, and this film plays a lot on those types of misgivings.

Oculus is a well-acted, taut and lean film about dealing with childhood trauma and the potential lies we tell ourselves to make sense of it all. This movie is not content at all to just jump out of the shadows and yell “Boo!” at us; rather, it excels at being creepy and very unsettling. Eschewing gore, nudity, or foul language and filling its running time with genuine tension, unease, and terror, Oculus makes its mark as one of the best horror movies of the modern era.