Posted by Michael Parsons on March 19, 2014 in Movie Reviews / No Comments

Cancelled before its time and leaving a lot of unanswered questions in the process, Rob Thomas’s CW television series “Veronica Mars” amassed enough of a cult following in three seasons to warrant entertaining the idea of a feature-length film, much like how Joss Whedon’s short-lived “Firefly” spawned 2005’s theatrical release “Serenity”. In this case made possible by a record-breaking Kickstarter 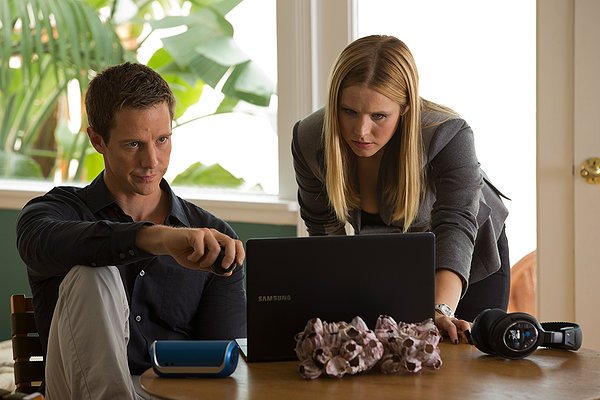 campaign, the “Veronica Mars” movie, which ravenous fans have waited seven years to see, ties up several loose ends while introducing plenty of interesting new scenarios, never missing an opportunity for humor while reminding us that Veronica is a force to be reckoned with.

The film picks up nine years after the events of the show’s final season, with the titular investigator (Kristen Bell of “Frozen” and the Showtime series “House of Lies”, comfortably slipping back into the role that put her on the map) now in her late twenties and interviewing with a prestigious law firm in New York, only two weeks away from taking the bar exam. Her life as a teen sleuth in fictional Neptune, California is a distant memory, until news 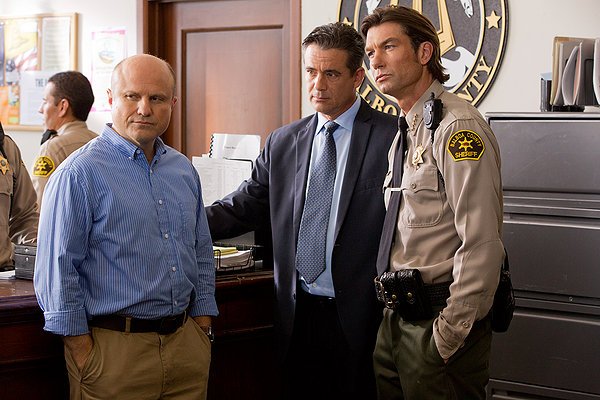 breaks of the death of a pop star who she went to high school with, who happened to be in a relationship with Veronica’s ex-boyfriend and prime murder suspect Logan (Jason Dohring). Believing that he’s innocent, Veronica heads to Neptune to help Logan, who is now a Navy lieutenant, weed through a barrage of slimy lawyers who are clamoring to represent him, and she finds herself caught up in an investigation that might link to the unsolved murder of her best friend Susan almost a decade earlier. In the process, she must contend with Neptune’s seedy police force, which has become even more corrupt in her absence, but even worse her high school reunion, which she’s tricked into attending by old friends Wallace (Percy Daggs III) and Mac (Tina Majorino).

Veronica’s only real solace is her father Keith (Enrico Colantoni), the once-sheriff who continues to run the Mars private investigation firm where Veronica got an unusually early start to her career (she received a P.I. license for her 18th birthday). Their relationship isn’t of the run-of-the mill daddy/daughter sort – he doesn’t intervene in her affairs, except for asserting the fact that he’s worried she’ll jeopardize her future as a lawyer by sticking around Neptune for too long.

Written by director Rob Thomas and series writer/executive producer Diane Ruggiero, “Veronica Mars” is both a tribute to its long-time fans and a confident stand-alone film for audiences who are unacquainted with the show. Funny but not silly, quirky yet down-to-earth, smart when it needs to be, occasionally dark but most of all just fun, the film more than justifies its existence, even if ultimately it doesn’t seem like a whole lot more than an extended episode.

Thomas does a good job bringing back characters from the show without having to shoehorn them in, namely Francis Capra as the ne’er-do-well gang member-turned-family man Weevil Navarro, Ken Marino as the sleazy Vinnie Van Lowe (Neptune’s second best P.I. but foremost ass-hat, as Veronica describes him), Krysten Ritter as the unstable socialite Gia Goodman, and “New Girl’s” Max Greenfield  as Veronica’s connection in the San Diego police department (among many, many others). Jerry O’Connell plays the corrupt, half-witted Sheriff of Neptune, who is so dense and comically self-involved that he suspects nothing of Logan’s conspicuous “Free Hugs” hat, which ends up containing a video camera that records some pretty incriminating statements.

Having only seen a handful of episodes back when the show was still running, my memory of it is fairly vague, but my enjoyment of “Veronica Mars” proves that binge-watching all 64 episodes is not imperative (the first several minutes are a thorough but not overwhelming recap of the series), even if there are clearly inside jokes and references that are likely to be fully appreciated only by viewers who are up-to-date. Nevertheless, the cast still appears fresh, and the script is enough to engage audiences who are not familiar with them, even if it never exactly achieves brilliance. Highlights include a funny cameo from actor James Franco, as usual a good sport when it comes to making fun of himself (there’s also a little nugget during the end credits), Gabby Hoffmann as the creepy Ruby Jetson, who dedicates her life to impersonating Logan’s deceased pop star girlfriend, and all interactions between Veronica and her dad.

“Veronica Mars” is available on VOD and in select theaters.