A woman lies bruised and bloody with her eyes closed in an alley. Snow comes down on top of her, while the gutters and corrugated tin roofs deposit the runoff onto the surrounding street. All around us are the cacophonous sounds of the water dripping, various street noise, the wind, and the footsteps of folks going to and fro. No words are said; we are only to experience the sensation of the image and sounds without any vocal interruption.

“Sensation.” There’s a word that gets its fair due in Lars von Trier’s Nymph()maniac Volume I. His opening scene, as described above, is a deceivingly simple setup for the complexity that unravels in the next two hours. Characteristically narcissistic and boundary-pushing, Von Trier seems to be at once at  home and alienated in this world of wanton, passionless lust, examining the natures of sex versus love, apathy versus feeling, and want versus need. 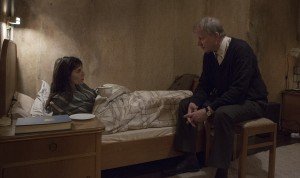 Joe (Charlotte Gainsbourg), the woman in that alley in the film’s opening moments, recounts her tale to a kindly man named Seligman (Stellan Skarsgård), who’s happened upon her and intends to call for help. After being asked by Joe not to do so (what she’s doing gets explained a few minutes later), he invites her to his place to get cleaned up and for a cup of tea. It is in wondering how she came to be in such a predicament that she tells Seligman (and us) how she came to be in that alley. Turns out that she’s an ardent nymphomaniac and almost an utter sociopath.

Joe’s past doesn’t focus on much other than her attachment to sex and how easily she wields it as a weapon, as a plaything, and as a tool to get what she wants. Von Trier’s words and visuals discuss all of her escapades in frank and explicit language, almost clinical in its nature and dry as a desert. There’s no flowering up what she does, nor is there any romance or love present; she takes to the bed just as easily and as thoughtless as it is for us to breathe. For example: the loss of Joe’s virginity as a teenager (played by Stacy Martin in flashbacks) involves walking up to neighborhood bad boy Jerôme (Shia LaBeouf, whose accent comes and goes like Kevin Costner’s in Robin Hood: Prince of Thieves), asking him to take her virginity, and waiting for him to fix his moped before he asks her to doff her knickers. It’s a very matter-of-fact, let’s-get-this-over-with kind of approach Joe takes to her sexuality, never wanting the same man twice nor believing in any kind of entanglements other than the purely physical.

Taking the part of the square, prudish audience, Seligman’s a perfect proxy, likening her sexual conquests to things like fishing or polyphonic music. His rationalizations represent how we might deal with hearing about behavior like Joe’s, and while his interjections border on the tedious, they often provide nice segues into the next parts of Joe’s story. It’s kind of fun to watch the fuddy-duddy-esque Seligman scramble to make sense of these lurid depictions that Joe’s throwing at him, but it’s also nice to watch him as a calming soul, in contrast to the tumultuous woman laying in his bed before him. 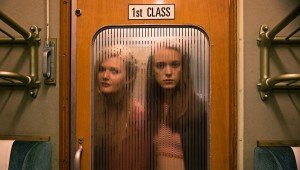 Honestly, the film reminds me a lot of a 1992 Belgian film called Man Bites Dog, which focused on a camera crew following a serial murderer around as he did his work. The odd confessions, the peculiarity of his actions, the motives, the madness, and the completely dark humor concerning the film’s main character made this film unforgettable. Von Trier has made Nymph()maniac Volume I equally riveting, using much of the same storytelling, moving in chapters instead of random vignettes.

Instead of the serial killer of Man Bites Dog, Joe’s near-ritual promiscuity drives a lot of the film’s twisted amusement. She doesn’t seem to care who she sleeps with or whose home she wrecks; we’re being told the story of a life without love, full of merely physical surface contact. Joe has defined herself by her actions, and it’s a bed in which she’s more than comfortable to sleep. It’s through this loss of all inhibition that the film really manages to take us through its paces, almost daring us to come along with Joe as she tells us who she is and about the incidents that made her who she is today. Laced with painfully dark humor, awkwardness, and despair, Nymph()maniac Volume I sinks itself under your skin and leaves you wanting more; one can only hope that Nymph()maniac Volume II can finish Joe’s story just as well as she started it.

Now in theaters and on VOD platforms like FlixFling.