Posted by Eddie Pasa on February 11, 2014 in Movie Reviews / No Comments

1987’s RoboCop was a watershed movie of its time. Boasting hyperviolent action, scathing sociopolitical commentary, and some brilliant performances, it ushered in a new era of cinema and practically dared any other film to follow in its footsteps. Smart, hilarious, brutal, and rather touching in places, RoboCop followed the story of Alex Murphy, a beloved father and police officer tragically cut down in the line of duty and reborn as “Part Man, Part Machine, All Cop.”

27 years later, as the Hollywood obsession with remakes/reboots rolls on, we have a new version of RoboCop for a modern audience. However, they’ve gone for more of a straight-up science-fiction tale. A wise woman once told me that science-fiction boiled down to two overarching tropes: social commentary or technology gone awry. While the original RoboCop was a wonderful mixture of the two, this new reboot sometimes feels like it dials it back to almost being exclusively in the latter category. However, it doesn’t mind making a few well-aimed punches sting a bit, though. 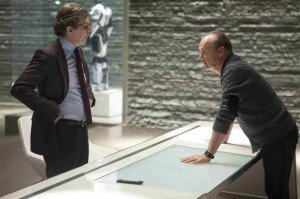 The largest skewer in this new RoboCop’s quiver is aimed directly at the heart of the uninformed and ill-advised public, personified in this case by Patrick Novak (Samuel L. Jackson), host of the newsmagazine “The Novak Element.” Here, we have Novak, who seems to be an almost Rush Limbaugh-esque analog, screaming for more robotic protection in our country at the expense of civil rights; the army’s got it for peacekeeping missions in other countries, why can’t we have them here? Caricature-like in presence and manner, Jackson absolutely nails the hysteria and the hue and cry that certain political action groups of late have espoused, standing misguidedly for the right things, but in the wrong way.

Another large swing is taken at big business and how corporations view the public as mere consumers whose only purpose in life is to line the pockets of the folks in the spacious boardrooms and luxurious offices. In response to Novak’s harangues and, oddly, the public support of legislation blocking the use of robots for law enforcement purposes, Raymond Sellars (Michael Keaton), the appropriately-named CEO of robot-maker OmniCorp (OCP) decides to meld cold, unfeeling robots with human responses and emotions as a way of circumventing the law. From minute one, all we know about Sellars is his ruthless and underhanded way of making sure the public will buy – not “accept,” but BUY – his new human/robot hybrid. Security is business, and Sellars is doing a lot of it, to the point where it’s not so much about what’s good for the community, but what test data, poll numbers, and tastemakers like OCP’s head of marketing Tom Pope (Jay Baruchel) thinks will sell and generate revenue.

All of this comes to a head at the expense of Alex Murphy (Joel Kinnaman), a rough-but-clean cop in a dirty town. Horribly injured by a car-bomb placed by arms dealer Antoine Vallon (Patrick Garrow), he’s later revived and his remaining parts are made into the human pieces of RoboCop, giving this retrofitted OCP model EM-209 a face, a voice, and all of Alex’s emotions. Being separated from his loving wife Clara (Abbie Cornish) and child David (John Paul Ruttan) starts to take its toll on Alex, as his brain chemistry and perceptions are messed with (non-maliciously, however) by Dr. Dennett Norton (Gary Oldman). The crux of Norton’s problem is: when making a human/robot hybrid, how long before the human side is completely eradicated and the machine is the only thing remaining? And with all the spin that Sellars puts on this tragedy, is there any humanity left in any of us? 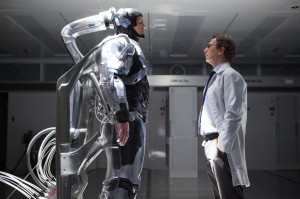 On the face of it (no pun intended), 2014’s RoboCop seems to be just a declawed version of its 1987 self. Gone are the comedic exaggerations of cops, politicians, businessmen, and consumerism. The outlandish, cartoon-like violence has been dropped in favor of a more family-friendly PG-13 rating. Basil Poledouris’ thundering main theme has been given a little bit of a dubstep facelift. The iconic imagery of Paul Verhoeven’s vision of New Detroit has been replaced by hyper-edited, documentary-style (read: shakycam) photography that leaves little to help the audience get its bearings.

However, where new director José Padilha and screenwriter Joshua Zetumer (working from the 1987 screenplay by Edward Neumeier and Michael Miner) get it right is fleshing out Alex’s backstory, personality, and emotions, which make for a more powerful character and a more believable RoboCop. Also, real-world analogues like the kind played by Jackson, Keaton, Baruchel, and Jackie Earle Haley (in a bit of a blind-follower role) serve to make everything more grounded in reality than the fantasy of the 1987 version. We’ve all seen the kind of men they represent – smug, greedy, and heartless suits whose only concern is the bottom line. At the heart of it is how the public and its workers are seen by folks like these: as mere ants who march to their tune, build what they need built, and eat what they drop from their tables. While it doesn’t have the same bite as its predecessor, this new version of RoboCop certainly does have something interesting to say.

(Special thanks to John Hanlon of johnhanlonreviews.com.)