Posted by Eddie Pasa on January 17, 2014 in Movie Reviews / No Comments

Let’s get this started: Jack Ryan: Shadow Recruit is the best Jack Ryan film since 1990’s The Hunt For Red October. Masterfully shot, edited, and acted, this reboot of the Ryan saga kicks into high gear and keeps the intrigue coming fast and hard until it’s time to unwind… and that’s when the credits start rolling. Director and star Kenneth Branagh has assembled what is probably the quintessential espionage action movie of the modern era, piling smarts, wit, and technological wizardry into a one hour and forty-five minute runtime. As this is the first film not directly based on late author Tom Clancy’s Jack Ryan series, writers Adam Cozad and David Koepp play a little bit with Ryan’s origins, remaining true to canonical events with a view to updating it all for a post 9/11 world.

Many Ryan fans, including myself, wondered why Hollywood needed a reboot of the character, much less one starring the new Captain James T. Kirk, Chris Pine. Within 5 years, he’s portrayed two very iconic roles (both for the same company, coincidentally), and many were wondering how he’d do justice to Jack Ryan. Well, his update of Captain Kirk across two movies has been fairly outstanding; why not give him a shot? Turns out that he’s every bit the actor necessary for the role of  a combat-injured Marine-turned-greenhorn CIA agent. Having witnessed the events of September 11, 2001 from his university in London, he immediately leaps to his country’s defense, only to be shot down in a helicopter, suffering major injuries and bravely dragging two survivors to safety. Those familiar with Ryan’s backstory (as laid out by Clancy) may cry foul at the non-inclusion of his Naval Academy schooling, but it plays well with what he’s being tasked with next. 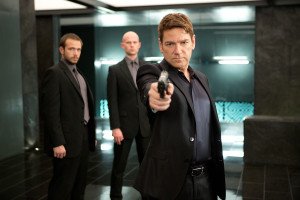 Recruited out of his recovery stint at Walter Reed Hospital by Commander Thomas Harper (Kevin Costner) for an analyst position in the CIA, Ryan sets to work in a Wall Street financial firm, studying currency exchanges and money markets in the hopes of preventing another terror attack. Stumbling onto hidden Russian accounts containing vast sums of US dollars, he is sent to check out Viktor Cherevin (Branagh), whose firm owns said accounts. Journeying to Russia and meeting with immediate hostility, Ryan is soon caught in the middle of a plot not just to cripple, but to utterly destroy the US economy. Not only that, he has to contend with his fiancee, Cathy Muller (Keira Knightley), who knows nothing of his CIA life and has started picking up subtle hints that her groom-to-be is not what he seems.

Played out in dazzling fashion, Jack Ryan: Shadow Recruit rumbles along at a breakneck pace, with believable danger and peril in store for our heroes. Cherevin has gone to devastating lengths to ensure his job is done, and it’s all Ryan can do to try to stop him. This isn’t some dumb, loud, A Good Day To Die Hard sojourn in Mother Russia; this is a thinking man’s action film, going well above and beyond being your run-of-the-mill thriller. It’s really about one man at odds with himself and the world around him, being shoehorned into a role he’s been trained for, but not ready to accept. As the film progresses, so, too, do Ryan’s capabilities and savvy. Pine gives a pensive, thoughtful performance as Ryan, harking back to the fish-out-of-water portrayal Alec Baldwin gave in The Hunt For Red October. He knows he’s out of his depth and is very willing to admit it, but that won’t stop him from trying to protect his country.

Thankfully, Branagh takes an old-school approach to his action sequences, favoring long shots instead of quickly-edited mush. He not only gets the action right, he gets worthy performances out of the actors as well, making this one of the most consummate action pictures today. This could easily have been a throwaway, easily-forgotten January leftover, but it rises way above its genre and becomes something notable. With tautly-directed action sequences and genuine humanity shining through, Jack Ryan: Shadow Recruit is a captivating, enthralling action movie that surprised the hell out of me.

And kudos to you if you catch the reference to another Costner-led film, The Untouchables.