Posted by Eddie Pasa on August 23, 2013 in Movie Reviews / No Comments

The World’s End in one word: terrific. And now for the rest of the review…

If you’ve ever listened to the blues, you’ll often hear the lead singer say “Bring it on home!” near the end of a song, as if to push his fellow musicians to go all-out with a glorious, crowd-pleasing climax. This is where everyone uses their utmost skills to create a raucous, foot-stompin’ good time, and that’s exactly what director/co-writer Edgar Wright has done with the final chapter of his Cornetto Trilogy, The World’s End. From 1999’s television show “Spaced” to the present day, Edgar Wright has been making true geek/pop culture works of art, and The World’s End feels like a final explosion of all the powers he’s gained from leveling up through the years.

In The World’s End, we find frequent Wright collaborator Simon Pegg playing the cackling, manic imp Gary King, whose quest for the ultimate good time was attempted at an early age, but never completed. That quest? A pub crawl called “The Golden Mile” in his hometown of Newton Haven, where participants must drink a pint of beer at 12 different pubs. Gary is a sad case of a man, holding onto this moment that passed nearly 20 years prior, but that’s not gonna stop him from reuniting the four school friends that made that attempt with him; as adults, Oliver (Martin Freeman), Steven (Paddy Considine), Peter (Eddie Marsan), and former best friend Andy (Nick Frost) begrudgingly agree to make one more attempt at this folly, no matter how Quixotic Gary’s made it up to be in his mind. 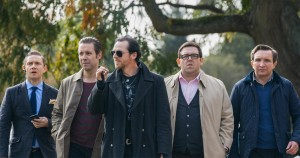 Returning on their own to Newton Haven from all over Britain, they find Gary in a state of complete arrested development, wearing the same clothing he wore and pulling the same shenanigans he pulled on that failed night all those years ago. But the further they go on the crawl, the more they notice that the town just isn’t the same – people they knew from their teenage years show no sign of recognizing the boys. Complicating matters further is the arrival of Oliver’s sister Sam (Rosamund Pike), a girl whose affections were desired by both Gary and Steven as high-schoolers, and now even moreso as adults. That’s where the movie takes a sharp left turn, probably around the fifth or sixth pub, and Newton Haven’s frightening secret starts coming to the fore; there’s something terribly wrong with the town’s citizens, and it’s up to the six of them to sort it out and stop it, all the while forging ahead on The Golden Mile.

Of the Cornetto Trilogy’s three films, The World’s End is the obvious standout, which seems difficult when the preceding two films were so terrific. How could one possibly improve upon perfection? By making an even more engaging and truly wonderful film, which is what The World’s End manages to be. Wright and Pegg’s screenplay employs a little bit of a carrot-dangle gambit to set up their characters, giving us a quick snapshot of each person as they are in the present and delving further into their respective pasts as the pub crawl goes on, keeping our interest piqued and our expectations high… and neither Wright nor his merry band let our expectations down for one second. Each of the five men represents a part of an idealized life – we wish we had Oliver’s money, Peter’s car, Steven’s body, and Andy’s tremendous heart. And Gary? We all wish to a certain extent that we could be free and totally id-driven like him. 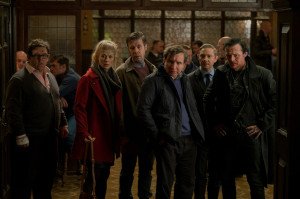 “Spaced” was where the world at large noticed Wright’s ingenious collaborations with Simon Pegg and Nick Frost; not only did Pegg star in the show, he also co-wrote it with co-star Jessica Hynes (née Stevenson). This show gave us a glimpse of what would make the Cornetto Trilogy stand out as true nerdfests – namely, a blend of comic book, sci-fi, movie, literary, and music cultures all rolled into a tight 25 minutes. The Cornetto Trilogy – Shaun of the Dead, Hot Fuzz, and The World’s End – are essentially feature-length versions of “Spaced”, with all of the humor, smarts, and wit spread throughout each feature’s runtime. Let it be said that it’s easy to merely stretch the types of jokes found in “Spaced” over the space of 2 hours and wear them thin. Wright and Pegg avoid this lazy technique and give us laughs and hilarity anew, striking a balance between the familiar staples of a Wright/Pegg collaboration and flying with a wicked grin into uncharted territory.

What’s great about Edgar Wright and his crew is that they give us actual reasons to walk into a theater with great anticipation to see each new product they create instead of relying on past glories to buoy their success. Wright has wrapped up his Cornetto Trilogy with one of the best bangs one could ever hope to witness; honestly, watching this trilogy’s end is one of the best times you’ll have in a theater all year. The Cornetto Trilogy is so named for use of the famous ice cream cones in each film: a red Cornetto for Shaun of the Dead’s blood, a blue Cornetto for Hot Fuzz’s police theme, and a green Cornetto for The World’s End to signify… well, that’s getting ahead of ourselves. You’ll have to see the movie first.