The Artist and the Model

Posted by Eddie Pasa on August 30, 2013 in Movie Reviews / No Comments

How can one describe Fernando Trueba’s The Artist and the Model? A love story about a sculptor and his muse? No, that would be wrong. A look at how a man tries desperately to hang onto youth, even though he knows he cannot? Getting there, but still wrong. Artistic inspiration and creation? Close, but not quite. The Artist and the Model is about all of these things – and really, not any of these things – mixed into one 109-minute film, with an air of sweet sadness overlaying everything.

Some of that sadness comes from the film being located in a small French village in 1943 during the Nazi occupation, but most of it comes from our main character, Marc Cros (Jean Rochefort). As a lifelong sculptor, he has let his skills lay dormant for several years, filling his days instead with people-watching and drinking at his local café. He’s lived through one World War, and his country is in the middle of another; it’s almost as if he’s just biding his time, waiting for death to come. A chance encounter finds his wife Léa (Claudia Cardinale) bringing a Spanish prison camp escapee named Mercè (Aida Folch) to their home, with Léa hoping to buoy her husband’s flagging spirits with this new potential muse. Begrudgingly, Cros takes Mercè to his studio, where the two embark upon a weeks-long artistic and personal journey together. 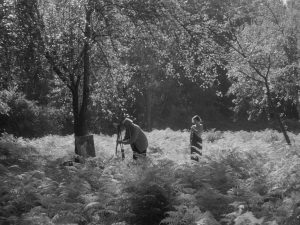 The Artist and the Model spends a lot of its time with Cros and Mercè, with Mercè being nude for a good portion of the movie. It is not meant to titillate; it is Cros’ belief that the female was the first, and therefore the most beautiful, form that God created, and that’s why he prefers to make art involving the nude female form. Rochefort imbues Cros with a subtle power as he sculpts, paints, and sketches Mercè in all manner of different poses and landscapes; we see him slowly reviving after the last few years of quiet drudgery. As his muse, Folch gives herself willingly to the camera, and she likewise gives Mercè willingly to Cros. The many different layers of Mercè’s character are exposed through small character moments; we only find out about her past when Mercè is being put to the test, and Folch plays it with an unfettered honesty that makes these connections enlightening and engaging.

Trueba makes several standout choices that separate this movie from the rest. First, there’s absolutely no musical score underpinning The Artist and the Model, leaving only diegetic sounds – a car driving up, dialogue, birds chirping, etc. – for the viewer to hear. As this film was shot in black-and-white, we’re left with a very stark, very dry film that lets the emotion be dictated by the performances and the settings. His script (co-written by Jean-Claude Carrièr) is sparse, only sharing what needs to be shared – there’s nothing said that doesn’t move the film forward. Each piece of dialogue firmly establishes why Cros is a respected sculptor, revealing his wisdom, his experience, and his weaknesses; it also exposes Mercè and the troubles she’s been through in the recent past.

Unfortunately, the one thing I’d like to talk about in analyzing detail is the one thing I cannot talk about in detail, and that’s the climactic scene of the movie. There’s an odd moment shown early in the course of Cros and Mercè’s work which the scene in question mirrors; it gets turned upside-down and given new meaning, and it can be taken so many different ways. Is it done out of love? Or is it lust? Is it done out of a hunger for youth? Is it an attempt to hang on to the last vestiges of purity? Trueba leaves this scene silent and almost mournful, and it’s one of the most gorgeously-portrayed human moments in the entire film. The Artist and the Model is full of humanity and sadness, but it’s in this scene where it all boils over and erupts with a whirlwind of emotions. After that, the ending really doesn’t matter; what matters is that life is renewed among the ruins. Moving and extremely thoughtful, The Artist and the Model is a rare breed of film that has the capability of captivating and stunning its audience by being simple at first look, yet exceedingly complex in its soul and heart.