Posted by Eddie Pasa on August 16, 2013 in Movie Reviews / No Comments

America at large can learn a thing or two from Cullen Hoback’s documentary Terms and Conditions May Apply, a film that reinforces what we’ve known for the last couple of years: privacy in America no longer exists. Whether we use Google, Facebook, or any other social networking service, we are being watched, and the majority of the populace seems to neither know nor care. Angering, frightening, and eye-opening, Terms and Conditions May Apply isn’t afraid to take you step-by-step into the harvest of our online lives and the culture of secrecy with which certain government agencies operate in order to police its citizens.

Especially now that the Edward Snowden story (which this film refers to in a post-credits amendment) has gone full tilt, a greater number of us are starting to realize just how far the rabbit hole goes. Terms and Conditions May Apply guides us through the many ways that government intelligence agencies have been able to circumvent the Fourth Amendment since September 11, 2001, while also noting the compliance of many different web services. Through vague language supplying loopholes big enough to fly C-130s through them, the United States government has taken advantage of the Patriot Act to monitor web searches, emails, Facebook posts, and other social networking sites for any hint of a threat against the country. 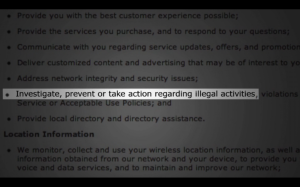 The documentary covers everything from the legal to the social ramifications of how Stored Communications Act of 1986 (also referred to as “Third Party Doctrine”) has given agencies like the Federal Bureau of Investigation, the National Security Agency, or the Secret Service free rein to look at our various internet communications and use them against perceived threats in the name of preventing terrorism, no matter how mistaken some of their endeavors may be. Among the highlights are the stories of two young men whose innocuous posts – one being a 12-year-old’s childlike, genuine concern that something bad might happen to the President during a visit, the other being a British kid’s famously misunderstood tweet about his impending vacation in America – resulted in visits from the men in suits, being detained in airports, and other erstwhile legal muckery. While these posts were put up for public viewing, it’s the reaction to them – not having been read in context nor fully understood and dealt with using scare tactics – that Hoback seeks to question.

Are we really free to say or look at what we want on the internet without fear of someone watching? Terms and Conditions May Apply shows us that we are, in fact, not. We are shown that Google searches are turned over to the government to look for anyone who may be searching up anything that may result in a terrorist attack. Just recently, a story came out about how an innocent family was visited by “a joint terrorist task force” for having Googled something to do with pressure cookers and backpacks. (Quite frankly, I’m sweating just writing that sentence, for fear that someone’s gonna be knocking on my door. To anyone reading this, please note: THIS IS A MOVIE REVIEW.) This kind of story is exactly what Hoback’s documentary is about; the overreach and overreaction of the government and the tactics its agents employ against innocent civilians. The film engages the viewer through thoughtful interviews and testimonials, making sure that the viewer knows exactly what’s going on behind the scenes. The stories and scenarios given in Terms and Conditions May Apply will frighten and anger you, but it’ll make you think. And it’ll certainly make you consider the words you type into that Google search bar more carefully.