Posted by Eddie Pasa on August 9, 2013 in Movie Reviews / No Comments

Picture Occupy Wall Street, the Blackwater Security Force scandal, our government employees not being able to keep a lid on confidential information, the current healthcare and insurance problems, a quota-driven workforce, and the continental divide between wealthy and poor all rolled into one movie. Then, set it in a bleak future with futuristic weapons, robots, spaceships, and a little bit of Johnny Mnemonic, and you’ve got Elysium. While it is very heavy-handed with its thinly-veiled commentary on our current societal troubles, it’s also a hell of a “running man” film that doesn’t bother with niceties. The film starts and ends with acts of violence that will make you wonder how far some people will go to achieve their goals, whether it be to protect the wealthy or to provide for the needy.

Los Angeles. 2154. No aliens. No apocalypse. No time travel. Basically, it’s the bottom rung on a dystopian ladder, with the Earth being diseased and overpopulated. Los Angeles is portrayed as a shantytown, where it seems the populace is either unemployed or working for Armadyne, a technology company in charge of Elysium. Elysium, of course, is a floating space station visible from Earth’s surface, where the wealthiest citizens have fled to continue living their lavish lifestyles. (Of course, most of the people shown to inhabit Elysium indicate that it’s the largest case of “white flight” ever seen.) Nothing seems to be wrong there, as there’s no disease, poverty, or crime; it’s the largest country club and homeowner’s association for the most exclusive clientele. 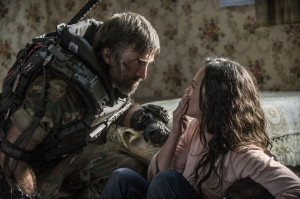 And if that doesn’t make you sick enough, they’ve also got these medical bays (remember the Medpods from Prometheus?) that are capable of eradicating any type of damage or illness – including cancer – from the body. Desperately in need of one of these medical bays is former criminal Max DeCosta (Matt Damon), a current Armadyne employee who’s just been accidentally exposed to large amounts of radiation. We get just enough of a glimpse into his life – both present and past – before the film takes off at 100 miles per hour and throws DeCosta into multiple perilous situations. He winds up having to protect himself along with an ex-flame (Alice Braga) and her leukemia-ridden daughter (Emma Tremblay) from mercenary Kruger (Sharlto Copley) and the head of Elysium’s security force, Mrs. Delacourt (Jodie Foster).

Director Neill Blomkamp’s previous film District 9 probed the divide between the privileged and the dregs of society, choosing to pit humans against large shellfish-like creatures called “Prawns.” With Elysium, instead of alien beings, he pits humans against humans, showing how worthless the poor are to the wealthy. At one point, DeCosta is told by his boss to perform a very dangerous task, threatening to fire him if he doesn’t carry it out. The callousness the poor are treated with in Elysium isn’t far off from what we face today; Blomkamp’s just using his script and the resulting movie to lampoon and skewer it all at once. The ineffectiveness of government is also sent up here with a scene that possibly could have been taken straight from a C-SPAN Senate hearing broadcast.

Elysium is 80% action, 20% think-piece on our current struggles. It preaches when it wants to, but it kicks a lot of ass when it’s not preaching. Ryan Amon’s score and Trent Opaloch’s cinematography keep Blomkamp’s script and direction moving and flowing at a rapid pace, allowing it to work symbiotically (much like the power exoskeleton DeCosta dons in the film’s second act) to make you feel its impact. Opaloch does get a little too in-your-face with the camera during fight scenes, and it’s done with that type of shaky-cam that I have lambasted in past reviews; he aims to disorient and dizzy us during these scenes, and he succeeds in doing so. The same can be said of the rest of Elysium, which ends up being a deadpan satire of the current state of the world.