Posted by Eddie Pasa on August 9, 2013 in Movie Reviews / No Comments

Planes feels like that guy at your party that nobody knows, but tries so hard to act familiar with everyone because he’s been told stories about you and your friends. It tries to demand a certain respect that it hasn’t been granted or earned. Look, Disney – just because it’s set in “The World of Cars” doesn’t mean that you can skimp on actually establishing these characters and making us care about them. If you’re going to emulate Pixar, at least have the decency to give it a heart and soul; don’t be content to ride the wave and be an also-ran. What I mean by all of that is this: Planes is a bad excuse for a coattail ride.

You see, the Pixar division of Disney seems to have dedicated its life to making memorable, personal, and wonderful stories about average, ordinary, everyday creatures or objects that wouldn’t otherwise have souls, voices, or opinions. From Toy Story to Monsters University, Pixar has maintained a proud tradition of making the unusual usual, striking a balance between humor (for both children and adults) and genuine emotion. In 2006, Pixar unleashed Cars upon the world, focusing on anthropomorphic vehicles growing and learning together about teamwork and friendship. The 2011 sequel furthered these lessons, also setting up the fact that not only cars could talk, but helicopters and airplanes as well; Planes is a spin-off of this film, and while it says it’s in the same world as Cars, it’s nowhere near the same quality.

Cropduster Dusty Crophopper (Dane Cook) wants to rise above the trappings of his job and become a racer , only to be told repeatedly that he’s “just a cropduster” and he’s “built for seed, not speed.” Eventually, as these movies go, not only does he find a team sympathetic to his aim, he also finds a coach in a curmudgeonly elder statesman (Skipper Riley, voiced by Stacy Keach). If this is starting to sound like a Cars retread, that’s because it very nearly is, from the personalities of his friends to the coach who wants nothing to do with him (at first). Yet they all help him prepare to be the first cropduster ever to win a large around-the-world plane race. 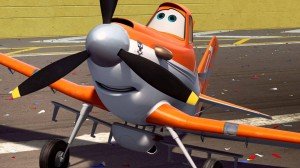 But here’s the thing: outside of knowing what place each character has in the proceedings, there’s very little reason for us to care about any of them. It’s almost like these characters are just being foisted on us, with the lines between “good” and “bad” planes being drawn quickly and a little carelessly. Also, both this film and Cars 2 had me wondering about how far certain characters would go to win. We’re starting to see a lot of violence and outright murder – attempted or achieved – in these movies, and I’m almost hesitant to want to bring my kid to them. Yes, there was Sid Phillips from Toy Story who did horrible things to toys, and Woody, who also tried to sabotage Buzz Lightyear’s place in Andy’s hierarchy; but in Cars 2 and Planes, there are participants actively trying to hurt or kill each other, and it’s kind of nasty, if you ask me.

Also, the moral of Planes is a little suspect as well – do you have to change who you are in order to win, or can you win on your own? By film’s end, it’s obvious which choice they went with, and I think it’s a little poorer because of it. Honestly, not even my 3-year-old child, who is usually enraptured with movies like this, could keep her attention on the movie. And yes, I am not the target audience for this film, but something must be said about how shallow and weak Planes is. Opting more for a humorless, dry story without any kind of character development or heart, Planes winds up riding a tailwind with nothing to power it on its own. And to paraphrase the tagline from a poster from the 1970s: “To avoid fainting, keep repeating: It’s not a Pixar movie… It’s not a Pixar movie… It’s not a Pixar movie…”