PLEASE NOTE: if you see this movie, A) avoid the 3D, and B) stick around for an extra scene right after the title of the film pops up during the closing credits.

There but for (or because of) the grace of Hugh Jackman goes The Wolverine. Where “there” is might be debatable, though: will it be remembered as one of the entries in what I call The Great Blockbuster Overdose of 2013, or does it have legs enough to stand on its own? Arguments could be made for either case and they’ll be presented below, but I feel that The Wolverine was just a setup to something bigger, as evidenced by a mid-credits scene involving two main characters from Bryan Singer’s X-Men films. It’s a 2-hour, 6-minute establishing shot that defines the person Logan (Jackman) has become after the events of X-Men: The Last Stand, and as much as you want to like it, you’ll walk away from it saying, “Ehhhh… it was okay.”

“Okay” is not something I want to see or hear or feel from a movie like this. It’s either too low-key or too hyper with its action that the film never really reaches a happy balance between the two. True, it’s fun to see Jackman in almost anything, as his natural charm and presence undoubtedly are his major drawing points, but seeing him surrounded by iffy performances and meager scriptwriting makes me wonder how much of The Wolverine is actually worth the trouble. The biggest problem I have with the film is that it telegraphs where it’s going in the first twenty minutes, leaving the middle to be merely filler stacked with what my sister called “too many moving parts” at our screening.

But let’s be truthful here: the reason you’re going to see this is because of Hugh Jackman, who looks terrific as ever as Logan/Wolverine, with his intense, moody face and his strapping physique. This is a role he’s inhabited for at least 13 years; not much has changed with his character, as he is still every bit the hard-charging, justice-driven rogue that we first saw in 2000 in a Canadian bar, fighting for beer money. Only time and the baggage of the intervening years have worn him down, pushing him to become a homeless recluse, living in the Yukon wilderness. His seclusion’s about to come to a screeching halt, however, as a Japanese girl named Yukio (Rila Fukushima) manages to sniff him out and bring him to Tokyo to see a man he saved from the Nagasaki bombing in World War II (according to comic canon, Logan’s been around since the 1880s). Yashida (Hal Yamanouchi), dying of cancer, wants to offer Logan what he’s never had: a final death and a release from his life of immortality. 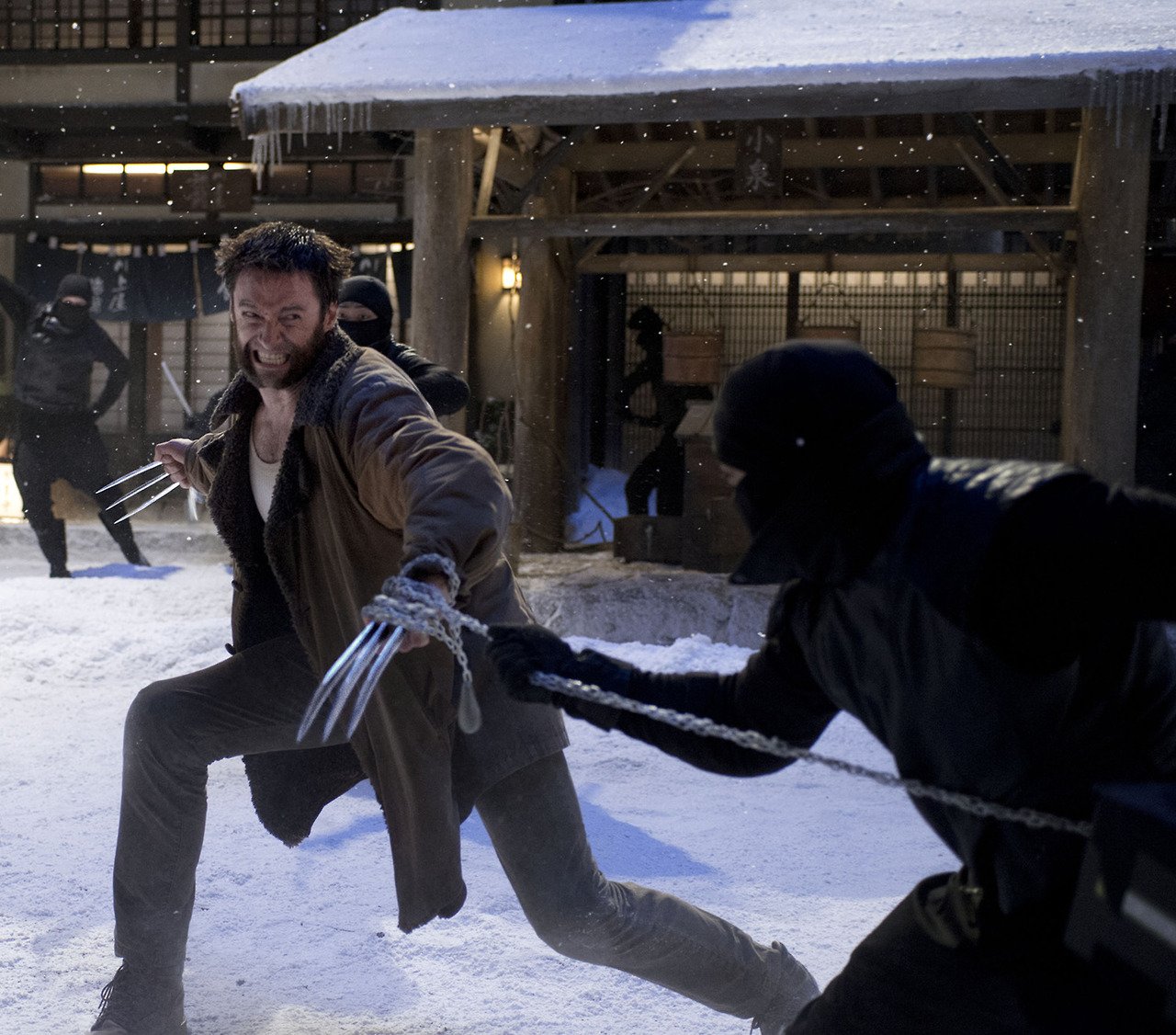 At this point, we start to get lots of plot points and characters with dubious motivation thrown at us. Gangsters and ninja, for their own shady reasons, start coming after Logan and the girl he suddenly feels the need to protect, Yashida’s heiress Mariko (Tao Okamoto); also, Logan’s visions of the deceased Jean Grey (Famke Janssen) are starting to cloud every issue. Screenwriters Christopher McQuarrie, Scott Frank, and Mark Bomback seem to want to bury a relatively simple plot in a sea of intrigue and location-swapping, and the film certainly hits a very dull stretch where Logan and Mariko are hiding out and getting to know each other. Quite honestly, I did that thing where I snapped my head back after falling asleep for a quick second during one of their many exposition scenes.

Even though I didn’t like it as much as I wanted to, The Wolverine does manage to entertain and be fun. Fukushima is an absolute delight in her role as Yukio, one of the film’s three mutants and Logan’s self-appointed bodyguard. Her character is a joy to watch, in contrast to that of Mariko, who seems to do nothing but stare blankly at everything, almost completely disconnected from the world and what’s happening in it. And as the third mutant, Viper, Svetlana Khodchenkova looks like she’s having a blast playing the reptilian villain, almost seducing the camera and oozing sensuality, even as she horribly dispatches anyone in her path.

As I’m remembering the movie for this review, I can recall it moving at two speeds: either breakneck speed or a snail’s pace. The stuff happening at breakneck speed was relatively exciting, if not slightly underwhelming, and the stuff happening at a snail’s pace really was a little bit more than slightly boring. The Wolverine is an okay, middling film with no real purpose other than to set Logan up for the mid-credits scene that winds up being a hell of a lot more intriguing than the previous two hours. Avoid the 3D, as it adds nothing to the enjoyment of the movie.