I can’t really think of a way to start this review, so I’m gonna go at it from the gut, without trying to flower it up; please forgive the style (or lack of it). Let’s start with my direct thoughts on Rushlights: the cinematography is actually wonderful, and it’s got a good cast. What it doesn’t have are great direction and a good screenplay; sophomore director Antoni Stutz has a great palette with which to work, but he never quite makes it all fit well together. Negatives aside, Rushlights is a competent, engrossing, and original con movie that manages to hold your attention, if only to see what the next twist or turn might be.

Stutz, working from a screenplay co-written by himself and Ashley Scott Meyers, has created a low-budget neo-noir about two kids trying to pull off a fairly large con without even so much as considering how to pull it off successfully. Sarah (Haley Webb) has been waiting on Billy (Josh Henderson) at her diner for the past few weeks, with the attraction evident in the opening scene and fully realized soon after. When her roommate Ellen dies of an overdose and leaves behind a letter saying that her deceased rich uncle has left her his entire Texas estate, Billy gets the idea to pass Sarah off as Ellen (as they do look extremely alike) and get the inheritance, after which the two would disappear and make a new life for themselves. 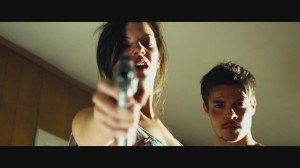 Sounds easy, right? However, they’re completely out of their depth; even though they’ve plotted out a somewhat plausible backstory, they’re not at all prepared for the small Texas town’s denizens, especially the Brogden brothers, attorney Cameron (Aidan Quinn) and local Sheriff Robert (Beau Bridges). It’s only a matter of time before one or the other finds out that Sarah and Billy are not who they claim to be; throw in Ellen’s drug dealer Edward (Crispian Belfrage) who’s followed Sarah and Billy to Texas, and you’ve got a large stewpot waiting to boil over and explode, with ample tension and menace egging the proceedings on.

This is where Stutz mostly succeeds – he has his actors do their best to convey the film’s growing unease through an uneven script, and they do it quite well. While not every performance is great, it’s just enough to get the story going, with characters moving in and out of the way in what Stutz wants to be an intricate dance. However, it’s too off-tempo for that dance to have a beat, with overly-contrived dialogue and a major plot twist screaming out of nowhere to throw everything off-track (and that’s saying something, in a film with more than its share of plot twists). There’s no flow to the script, and Stutz’s direction matches that lack of flow with odd transitions and more fade-ins and fade-outs than the ending of the theatrical version of The Lord of the Rings: Return of the King.

Yet it’s damned nice to look at, thanks to the actors and Gregg Easterbrook’s lush cinematography. Easterbrook keeps everything grounded, well-framed, and well-lit; it may also have to do with the fact that Rushlights was shot on traditional film rather than digital cameras, inherently having a much more stable and rich look. The cast, led by elder statesmen Bridges and Quinn, perform ably enough to get the film’s point across, saving the uneven Rushlights from being another faceless and forgotten DVD in the cut-out bin. There may be better con movies than this, but Rushlights manages to rise above its low budget and be a fairly gripping thriller.