Posted by Michael Parsons on July 4, 2013 in Movie Reviews / No Comments

My dad was really looking forward to seeing “The Lone Ranger” because he’s nostalgic for the days when he used to listen to the radio serial. Boy, is he going to be disappointed with this movie.

By the time the “William Tell Overture” is trumpeted in the final act (I’ll at least give away that a freight train is involved in the proceedings), it feels more like an awkward tribute to the source material than an integral component of the film. This “Lone Ranger” is the biggest, goofiest, most overblown movie I’ve seen so far this year, and I’m almost ashamed that I can’t come up with a more creative description of it.

Mentally geared toward children but at the same time way too violent to be considered a kid’s flick (there is a “Temple of Doom” style heart removal involved), this hare-brained epic can’t quite decide between dark origin story, campy throwback Western or plain old Disney movie. Normally, this is where I’d come in and say that the acting is top notch, and that they’ve been robbed by an underdeveloped story; even though this multiple-writer script is deficient, that’s not entirely the case. With the “Pirates of the Caribbean” mess still fresh in my memory, I’m fully concerned that Johnny Depp, once one of my favorite actors,  has gone the way of Eddie Murphy (e.g. “Norbit” and “Meet Dave”), once one of my favorite comedic talents. If the film performs well, maybe the sequel will be called “The Lone Ranger Grows a Pair.”

Because it’s not until the grand, ridiculous finale that the titular character, played by a secondarily billed Armie Hammer (excellent as the Winklevoss twins in “The Social Network”), does anything even slightly heroic, making it difficult to sustain interest in him. In fact, the”ranger” is the sidekick almost until the end – for nearly two hours of the film’s 149 minute running time, he embodies the overly polite, idealistic nature of his not-so-alter ego, a lawyer name John Reid, even after his brother Dan (James Badge Dale, “World War Z”), a Texas Ranger, is murdered by the most wanted man in the West – the ruthless outlaw Butch Cavendish (William Fichtner, “Elysium”).

Reluctantly joining forces with Tonto (Depp), an outcast Comanche Indian who believes that the Ranger is a spirit walker of sorts who now shares his personal disdain for Cavendish, Reid becomes intent on making things more difficult for everyone (including the audience) instead  of the people responsible for killing his brother. 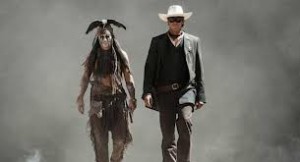 It’s pretty nauseating how “The Lone Ranger” picks at the carcass of the legendary character to create this inflated mess, but for my generation it’s probably more upsetting to see Depp complete his transition from rebellious John Waters staple to Bruckheimer mainstay. This is the epitome of a big, fiscally bloated summer release (budgeted at somewhere around $250 million), an extravaganza likened perhaps to 1995’s “Waterworld” (though truthfully, “Waterworld” was a much more imaginative, entertaining film), writing checks that it might not be able to cash. Director Gore Verbinski does just about everything he does in “Pirates”,  just in the desert. Only “Ranger” is bigger, and somehow even worse.