Posted by Michael Parsons on June 28, 2013 in Movie Reviews / No Comments

I think I’ll file “The Heat” under “not nearly as bad as I’d expected”, because I can’t bring myself to outright recommend it, but at the same time I’ll be watching it again when it comes out on video. Though the film is funny more often than not, it’s also very easy to forget; in other words, you might have a hard time recalling why you were laughing so much. In fact, I’m having trouble remembering right now – I just know that I was laughing. 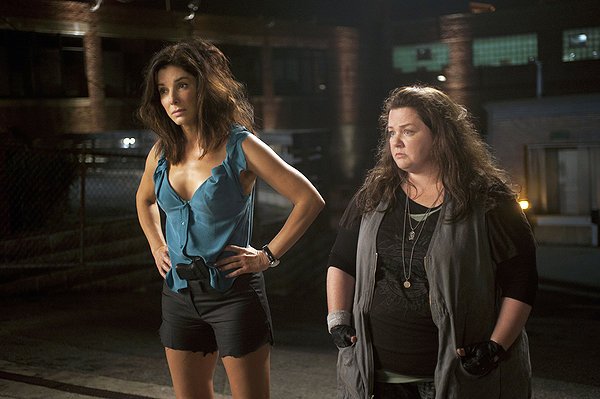 Relatively even-keeled for this brand of comedy and also pretty tame compared to its R-rated contemporaries (even with some very descriptive dialogue, it doesn’t come close to some of these other “gross out” comedies), “The Heat” could have been much better had it shed about twenty minutes of painfully labored scenes and lagging sidebars. Thankfully, the dynamic between its two leads, Sandra Bullock and Melissa McCarthy, is appealing and funny enough to make these stupid moments tolerable (the worst of them being a drunken dance routine at a dive bar during the requisite bonding montage – do people really find those funny?). Ultimately, it turns out to be a pleasant surprise, even if the actors could’ve played these roles in their sleep.

Director Paul Feig’s extremely well-received “Bridesmaids” was overrated in my opinion, but it brought the talented McCarthy to light at the very least. “The Heat” is about on par with that film, though ironically might end up underrated (it’s okay, a sequel is already in the works). Following a straight-laced FBI agent (Bullock) who’s forced to team up with a grungy, foul-mouthed Boston detective (McCarthy) in order to catch a high-profile drug dealer, the film revitalizes the female comedy with nary a wedding dress nor poopy diaper to be found. Nope – this is strictly guns, grenades and profanity, with the occasional clever joke thrown in for good measure.

You might think that this would be McCarthy’s movie based on the audience it’s geared toward, but Bullock, basically drawing from her characters in “Miss Congeniality” and “The Proposal”, reminds us that she knows how to do a real comedy now and again. She has one of the best lines in the film; when the coroner shows them a man whose tongue had been removed and placed in his backside, she refers to it as “tongue-in-cheek”.

The film takes all the necessary turns to ensure that Bullock’s buttoned-up Agent Ashburn gets out of her pantsuit shell and McCarthy’s greasy, loose cannon Detective Mullins improves on her expletive-laden communication skills. There’s the expected head-butting  – sometimes quite literally. While dealing with various seedy characters, from an array of drug dealers to Mullins‘ estranged family (Jane Curtin is underutilized as her perpetually angry mom, and Michael Rapaport plays the sweet-natured brother she put behind bars for something or other), the plot borrows from any number of classic buddy pictures, but most of the story is an afterthought to the repartee between Bullock and McCarthy. “The Heat” is certainly better than any male ensemble comedy I’ve seen this year (I keep finding myself using “Hangover Part III” as an example of that), at the same time removing gender emphasis almost entirely. Written by “Mad TV” contributor Katie Dippold, “The Heat” isn’t exactly smart comedy. It just has the right feeling behind it.