The Look of Love

Posted by Michael Parsons on July 5, 2013 in Movie Reviews / No Comments

Michael Winterbottom’s newest film, curiously – I guess ironically – titled “The Look of Love”, is a scattershot biopic about UK adult entertainment titan Paul Raymond. If you’re not at least middle-aged and/or British (or simply have never picked up a nudie mag), then you might not have heard of this man, who’s portrayed by Steve Coogan (“What Maisie Knew”) as an extraordinarily superficial, self-centered person whose insecurities are veiled by his incredible financial success. The film, too, stays almost entirely on the surface, which is a shame, because amidst the artfully overdone atmosphere of the ‘50s, ‘60s and ‘70s that Winterbottom clearly has an eye for, the principle characters appear almost completely black-and-white. 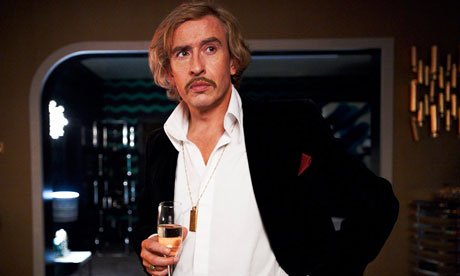 These types of films invariably deviate from the true events, whether to create a cohesion between scenes or simply to make the story more interesting (and/or bankable). But it’s rare that I find one so interested in looking the part of a period piece that it neglects to explore what lurks beneath almost altogether, with details as a centerpiece and the emotions of its characters on the periphery along with what I think were probably some pretty significant developments.  And this seems like it would have been a more compelling story if – and I say this with the idea that more time would have been given to these very talented actors to dig into those moments – the film had been about twenty minutes longer. That’s not without regard to the bevy of beautiful naked women, of course.

A quick reference to Wikipedia suggests that “The Look of Love”, which Winterbottom (“The Killer Inside Me”) directs from a script by Matt Greenhalgh (“Move On”), has missed out on several opportunities to dredge up some pretty fascinating stuff, not the least of which are Raymond’s early years as a young racketeer named Geoffrey Quinn and his later ones as a regretful old recluse.

These aspects are limited to mere mention and allusion, though, and like several other plot points that are introduced just as quickly as they disappear, it promises a much deeper story than we’re given. Perhaps it’s only because the film is spread too thin in order to cover all the pivotal events that were public and controversial during Raymond’s ascent into obscene wealth, that we don’t get inside his head much. And to me, depicting something that we can’t simply read about on the internet is what a biographical picture is all about.

Not that the subject of the film isn’t thoroughly intriguing. Raymond was, in fact, declared Britain’s richest man in 1992, owning countless properties, businesses and several adult publications. He opened The Raymond Revuebar, London’s first strip club, back in 1958. Before that, he had a mind-reading act when he realized that the audience was paying more attention to his beautiful assistant – and even more so if she was topless. An entrepreneur, a pioneer, a visionary. A supremely terrible husband and parent.

When the film opens, we find Raymond in an open marriage with beautiful wife Jean (Anna Friel, “Land of the Lost”), who is also his business manager. Later – many years that go by in a flash – he ends up leaving Jean for one of his performers (Tamsin Egerton, “Grand Piano”), neglecting his three kids and relocating to a penthouse that he more than once mentions was designed by Ringo Starr (“I’m good friends with The Beatles”, he later boasts to one of his estranged sons). 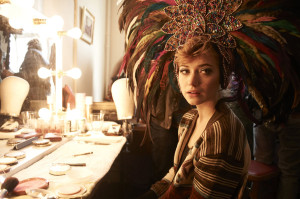 Some years after his divorce from Jean, which in the film is stated as being the largest settlement in Great Britain’s history, Raymond rekindles his relationship with his daughter Debbie (Imogen Poots, “A Late Quartet”) who’s been expelled from boarding school and decides she wants to get into dad’s biz, singing (fully clothed) in one of the big shows that he’s producing. But the gig eventually gets cancelled due to its inflated budget, and the tears and drugs start flowing. Why does she want a relationship with him in the first place? This is perhaps the biggest example of something that goes completely unexplored. It’s not long before before daddy/daughter time consists of an eight ball and some sleazy associates. The way the film develops, with plenty of emphasis on the visual aspects of how crappy things really are but with very little attention paid to the internal cause of it, it might have been more appropriately titled “World’s Shittiest Dad”.

We’d be left to our own research – if we were so inclined – to learn anything more about the UK’s most lecherous entrepreneur, whose narcissism and despicable behavior sent a ripple effect through his family, later resulting in terrible tragedy. It’s apparent what that tragedy will be in the opening moments of the film, but it’s all played with only a smattering of emotion, favoring the tone of the various eras over sentimentality, the depiction of substance abuse over the effects of it. It would have been nice to have just a little evidence to the contrary – like there was at least some connection between these people – to make the whole thing more effective. In that regard, “The Look of Love” is not a terrible film, it just seems incomplete.

“The Look of Love” contains language, drug use, sexual situations and lots of (mostly tasteful) nudity.