This is the End

This is the End feels kind of like watching how Pittsburgh Penguins made (and ended) their run at the Stanley Cup this year – there’s a ton of firepower on the team, but they fall just a little bit short of their desired goal.* There’s no question that everyone involved in the movie has the talent and skill to make people laugh and enjoy themselves, but it’s more a question of “how do we get this to all come together to make one coherent piece?” While the competing comedic talents of Jay Baruchel, Seth Rogen, James Franco, Craig Robinson, Danny McBride, and Jonah Hill constantly pull you in different directions and make you wonder where the funny is, the insanity and chaos that is This is the End tends to make you forget about much of it.

The thing that This is the End succeeds at is consistently trying to be funny, with sight gags, insults, and an attempt at genuine camaraderie, no matter how forced it sometimes might seem. However, all of this combined still doesn’t make the laugh-a-minute-yukfest that this movie so desperately wants to be. I mean, it tries hard to keep your attention and make you laugh; it definitely wins at the former, but is rather inconsistent at the latter. Moreover, it’s definitely going to anger the Christians, as it’s a film about the Rapture and it’s not as angelic as they’d probably want it to be. But then, again, this is a movie from the minds of Seth Rogen and Evan Goldberg (both sharing screenplay and directing credits), the writing team who brought you the excellent Superbad, so you know what you’re signing up for when you buy a ticket to this movie: multiple drug references, political incorrectness, and large-scale irreverence.

It’s also a movie where actors play exaggerated versions of themselves for comedy’s sake; some wring the best laughs of the movie (like Michael Cera, hilariously destroying his squeaky-clean image by playing a huge cokehead and sex addict), while others tend to annoy and hinder every scene they’re in (Danny McBride, pretty much playing his Kenny Powers character from HBO’s “Eastbound and Down”). But the majority of the film’s weight falls to supposed best friends (and former co-stars on Judd Apatow’s television show “Undeclared”) Jay Baruchel and Seth Rogen, and they carry it admirably, with Baruchel playing straight man to Rogen’s trademark outlandish antics. 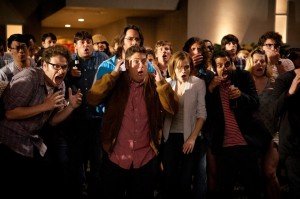 Baruchel, visiting Hollywood from Canada, arrives just in time for a huge party at fellow actor James Franco’s house; uncomfortable with Hollywood parties and the company found therein, Baruchel leaves the party to get cigarettes with Rogen in tow and is witness to blue light tunnels sucking people up to the sky. Soon, the party turns to absolute madness as a sinkhole opens right in front of Franco’s house that looks like a path straight to Hell. Six survivors are left from the party at Franco’s – Baruchel, Rogen, Jonah Hill, Craig Robinson, Danny McBride, and Franco himself – who all set about barricading themselves in the house and rationing out the food and water. Of course, everyone’s got their own way of interpreting and dealing with things, so they get in each other’s way as they try to come to a consensus on how to cope with the Apocalypse.

For me, this is where the movie bogs down and becomes unexciting and unfunny – to be sure, there are moments of laughter, ranging from the mirthful to the disgusted kind, but they’re few and far between. Bookended by brilliant opening and closing sequences, This is the End starts drowning under the weight of its own pretension, as it tries to take itself way too seriously, mining a sort of comedic drama from a naturally absurd circumstance. Personalities and preferences lock horns and jockey for position, with McBride being the tornado that messes everything up, but in his own brash comedic style (which I seldom find funny).

With the conceit of the actors playing fictional versions of themselves, they’re free to do what they want, how they want, and for however long they want. The six leads wind up playing different parts of Sigmund Freud’s structure of the psyche – the ego (Baruchel, Robinson), the superego (Franco, Rogen), and the id (Hill, McBride). McBride is totally id-driven, with his character doing everything he can to stay alive – lying, cheating, hoarding, and eventually turning into what he winds up at film’s end. As the group’s conscience, Baruchel plays it sweet and low-key, trying to put the group’s best interest ahead of the individual’s need, but he often gets misinterpreted by McBride; they form a very odd ying-yang on opposite extremes, leaving the other four to kind of sink or swim on their own.

Like I’ve said, some of it’s funny, some of it’s not. Like a lot of Apatow-based comedy, a lot of the laughs aren’t so much from how well a joke succeeds, but how much it doesn’t succeed; as this was written and directed by Apatow Factory alumni, this kind of comedy is not unexpected. This is the End winds up spinning wheels for a little while during the middle, but its intentions are good and it’s not a bad laugh to have on a Friday night. I’ll leave you with this thought: if every good person on Earth has been assumed into Heaven, and everyone left on Earth is a doomed sinner because of some prior transgression in their lives… then what the hell did sweet little Emma Watson do in her life to warrant her exclusion from reaching the pearly gates?!