Posted by Michael Parsons on June 10, 2013 in Movie Reviews / No Comments

“The East” might have the most intriguing premise of any film I’ve seen so far this year. Breaking down genre barriers while not overtly attempting to revolutionize any of them, director Zal Batmanglij, who co-wrote the film with its star Brit Marling, approaches divisive subjects like the environment, religion and capitalism from an unusually off-kilter perspective. There’s a clear message in this atypical spy thriller, though it’s not delivered with the annoying obviousness of a political agenda; rather, it’s as if Marling and Batmanglij played devil’s advocate rigorously with one another on every plot point before allowing it into the script, conveying to the audience a refreshing, educated confidence. The result is a smart and edgy story that transcends some of its late-in-the-game inconsistencies, an espionage picture bolstered by a slick, thorough character study. 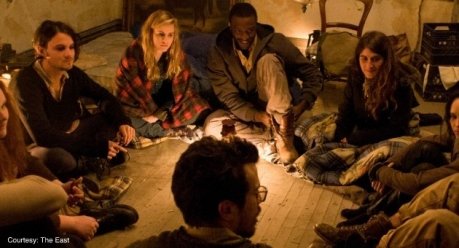 Marling (“Arbitrage”) plays Sarah, an ex-FBI agent who’s hired by a private security firm that specializes in thwarting corporate terrorism. She’s sent undercover to identify and infiltrate a group of extremists who live by an anti-consumerist ideology and periodically wreak havoc on oil and pharmaceutical companies (among other massive corporations). After scouring the coast for groups that fit the profile, Sarah meets Luca (Shiloh Fernandez, “Evil Dead”) during an encounter with the police and becomes immersed in a sub-culture of “Freegans” – environmentally conscious people who survive on discarded food and other resources to avoid leaving a carbon footprint (which Marling actually practiced in preparation for the role). 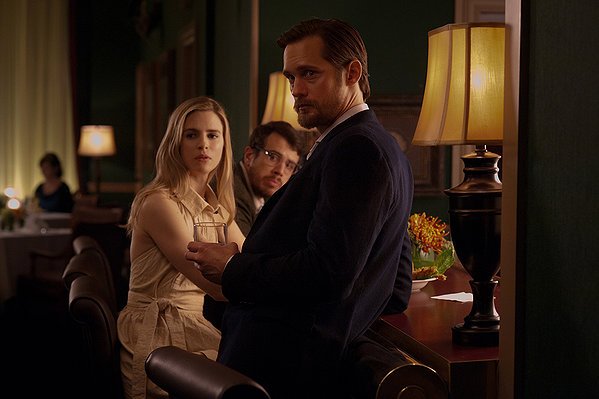 This is the peaceful tip of the monstrously aggressive, anti-establishment iceberg. Luca introduces Sarah to Benji (Alexander Skarsgård, “Disconnect”) and Izzy (Ellen Page, “Inception”), the leaders of the collective of anarchists known as The East. This group resides in a secluded corner of the woods, and initially seem like a peaceful hippie community (with Skarsgård sporting the unkempt look of cult leader), but at the same time are a tech-savvy, calculating group of activists who take the saying “taste of their own medicine” quite literally. I’d like to think that their computer equipment is at least refurbished.

If moments in “The East” are predictable, they might prove to be a respite from the sustained intensity of the film, which should be attributed to incredible performances by all, including Marling, who I imagine will start hearing her name a lot in February. Unlike Sarah’s boss (an icy suit played by Patricia Clarkson, “Shutter Island”), who is a pretty black-and-white picture of an evil corporate puppet master, The East, at least at some point, appear to have an admirable purpose.  The trick of the whole thing is understanding the hypocrisy of both sides, whether or not you agree with their intentions. It’s not how the film unfolds that’s such a surprise, nor are the moral dilemmas that present themselves anything we haven’t seen. It’s that Marling and Batmanglij (who collaborated in the same capacity on 2011’s “Sound Of My Voice”) know exactly what they’re saying, and though the revelation isn’t exactly life changing (at least as far as film experiences go), they don’t overcomplicate its relatively fundamental point. What really impresses is the language – it’s intelligent and almost always dead serious, but it’s never pretentious.