Technology has come a long way since the special effects in “Independence Day” almost twenty years ago, but apparently the criteria for making your standard Roland Emmerich film have not. From the big, oversimplified plots and exploding buildings right down to the precocious little kid who inevitably has some hand in saving the day, not much has changed, no matter what the circumstances are. If you didn’t know, Emmerich’s “White House Down” is the second White House under siege picture to come out this year, the first being the slightly less animated “Olympus Has Fallen”, which was so bad that I’d prematurely assumed it would be the lesser of the two films. Boy, did it end up being close. 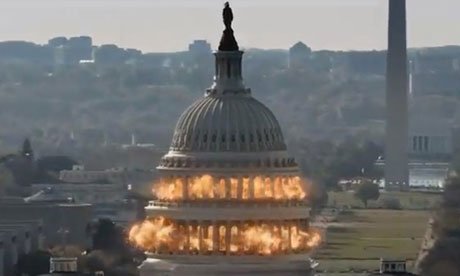 Where “Olympus” took itself way too seriously, proving humorous for all the wrong reasons (albeit extremely violent throughout), “White House Down” takes the bankable family friendly route, consistently trying to be funny to keep things light while also avoiding the blood spatter. Though it’s quite entertaining for a while, at least as summer popcorn fare goes, the script from James Vanderbilt (“The Amazing Spider-Man”) digresses into an exercise in eyeball rolling, mainly because the plot developments are so obvious that it’s difficult to believe that they couldn’t have come up with anything more original. That’s to be expected, I think, but even for an Emmerich film, it becomes a little too much to bear.

But back to the action, which is why I suppose we should be here in the first place (even if we don’t get the satisfaction of seeing a bad guy taking a knife to the skull, like in the very R-rated “Olympus”). “White House Down” might be dumbed down and often illogical, but plenty of explosions, including a detonation in the Capitol building early on in the film, should keep your frontal lobe out of the picture just long enough for you to buy into the re-hashed, high concept premise. Though the visuals are much more realistic here than in “Olympus”, the tone of this film is far less serious, and in many ways acknowledges its own ridiculousness – kind of refreshing when everything else is trying to be so grim. At least for a while. 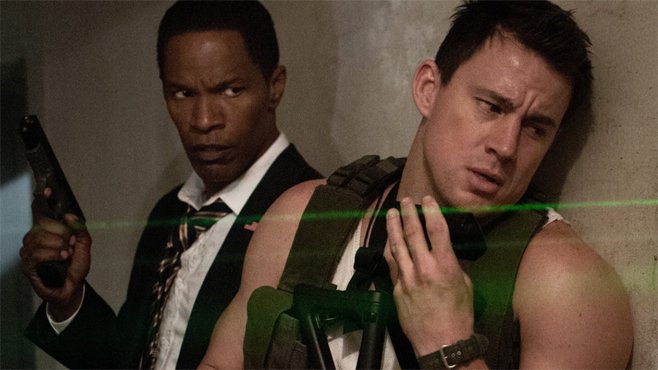 A group of paramilitary goons takes over the White House with a little help from Secret Service head Martin Walker (James Woods). The team, led by an ex-CIA operative named Stenz (Jason Clarke of “Zero Dark Thirty”), efficiently dispenses of all security and secures the building without so much as a hiccup. In the midst of the chaos is an off-duty Capitol policeman named John Cale (Channing Tatum) who’s taken his estranged daughter Emily (Joey King) on a White House tour after being interviewed for a position with the Secret Service for which he is promptly rejected (for not being a team player, or something like that). Separated from Emily during this onslaught, Cale rescues President Sawyer (Jamie Foxx) from Walker and Stenz, who need the President for something or other – launch codes? Ransom? Revenge? Every one of the bad guys seems to have a different motive borrowed from a different movie. There’s even a cartoonishly diabolical, oddly fashionable computer genius who’s running the mother of all hacks on the White House mainframe to keep us wondering what the hell the much bigger, more preposterous scheme really is. 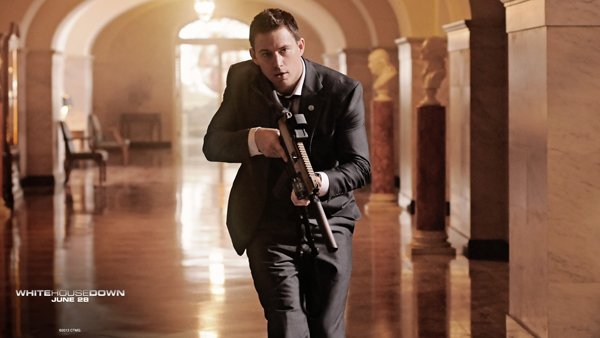 There are plenty of great big action sequences in “White House Down”, but ultimately that’s all the movie is, and it’s not enough to make up for an atrociously cheesy finale (not to mention some spots in between). As empty-headed action films go, I suppose it’s at least mediocre – at times it can be fun, particularly because it stays predominantly in the realm of make-believe (even the politics are too idealistic to be taken seriously). But somehow you know it’s going to ruin itself somewhere along the way, and eventually it does. Thanks to a likable cast, though – namely Tatum, Foxx and Maggie Gyllenhaal as a high-ranking Secret Service agent, it doesn’t sink entirely. Still, the effort seems wasted with too many attempts to be clever, which this film is certainly not. There’s one exception, a line from a tour guide early on: “This section is the residence. It’s the part of the White House they blew up in “Independence Day”.” I definitely laughed at that.