Posted by Eddie Pasa on June 7, 2013 in Movie Reviews / No Comments

As soon as you hear the word “pieta,” you’ll do one of two things: 1) run to Google to see what “pieta” is, and finding that it is the Italian word for “pity” or “piety,” or 2) remember whatever religious or art education you had in your life and remember that Michelangelo once did a sculpture called The Pietà, which depicts a sorrowful Mary cradling her dead son Jesus’ body in her arms. It’s the second of those options that came to mind when I heard about Korean director Kim Ki-Duk’s new film Pietà, which is getting its stateside release today. Bearing the image of Michelangelo’s work in mind when viewing this movie will help make a lot of sense of what’s going on, but it doesn’t explain or help everything, especially the scenes that Kim employs to give this film its uncomfortable, often nasty edge.

If you’re guessing that the subject matter has to do with a man and his mother, you’re right. Lee Kang-Do (Lee Jung-Jin) spends his days working as muscle for a loan shark, using senseless and brutal tactics to ensure payment from delinquents; his face is devoid of any emotion, often appearing empty and soulless, which adds to his almost horror movie slasher-like presence in the early goings. He has no one to care for or to care for him; without the ties of family or friends to keep him in check, he is almost the perfect psychopath. But his ruthless tactics are soon stymied by the appearance of his mother, Jo Min-Su (Jang Mi-Sun), who abandoned him as a baby thirty years earlier. 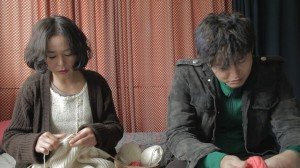 And with her entry into his life, he starts experiencing his childhood all over again, almost in reverse. Their resulting relationship is definitely a source of discomfort for the viewer, as his psychopathic nature is almost matched strike-for-strike by his mother. Starting their renewed relationship with a revolting, aggrieved act of violence, she accompanies him unasked on his enforcer duties, even joining in on beating an unfortunate man who can’t pay his bill. Eventually, the truth about her reappearance into his life is uncovered, and the film, already at a dark place in the early goings, gets turned into even more of a dark place.

Pietà is definitely one of the more disturbing films I’ve seen in recent memory, merely because of the sheer narcissism each of the leads espouses. The transformation of Kang-Do from an almost Michael Myers-like stalker into an irrational, sniveling mama’s boy takes a little bit of a leap of faith, but Lee Jung-Jin makes it believable, with his blank face suddenly finding sparks of humanity that turn into a full-blown fire. But as the quiet Min-Su, Jang Mi-Sun rules this movie, with us hanging on every word she speaks and every action she undertakes. Her presence alone is what drives this movie, and whenever she’s onscreen, we pay rapt attention to the slightest details of what she’s doing, whether it’s knitting a sweater or stomping a delinquent debtor.

This is the kind of movie that will stay in your head for days, whether it’s due to the horrific actions of Kang-Do or the endgame in which we find ourselves at finish of Pietà‘s 102 minutes. Director Kim Ki-Duk throws us into corners of the psyche that most of us will never find ourselves, and it’s by the saving grace of the lights coming up in the theater that we’re reminded that we are who we are.