Posted by Michael Parsons on June 7, 2013 in Movie Reviews / No Comments

“Black Rock” is an effective enough thriller that might be compared to more graphic films like “I Spit On Your Grave” if it chose to be so exploitive. But director Katie Aselton, working from a script by her husband, “The League” co-star Mark Duplass, doesn’t want to explore such atrocities in gory detail; it’s a relief, mostly, that we don’t end up watching some sadistic horror show (in fact, there probably need to be more films like this in the genre). It’s just a shame that in this case, the result feels a lot like a watered-down rendition of “Deliverance,” with a vague message that might be misinterpreted by people who easily buy into stereotypes. 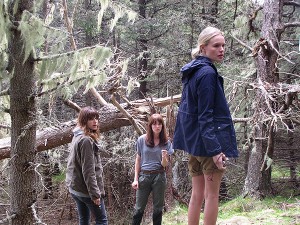 That’s not to say that the film is entirely uninspired. Everyone involved seems to be pretty far outside their comfort zone, which makes for a palpable awkwardness and believable dialogue. Abby (played by Aselton), Sarah (Kate Bosworth, “Straw Dogs”) and Lou (Lake Bell, “No Strings Attached”) are three young women who take a weekend trip to go camping on an island off the coast of their hometown in Maine, hoping to reconnect after years of drifting apart.

Well, it’s Sarah’s hope, anyway. She lies about having cancer in order to coax her feuding friends onto the boat (a great start to the bonding process – she quickly comes clean, though), which is questionable decision #1. We find out that a while back, Lou slept with Abby’s boyfriend, and Abby still holds a grudge despite now being married to someone else. In the first twenty minutes, it is amply established how little they want to be around one another, and it begs the question, which one of these two is going to die first?

More deep-rooted emotional and domestic issues surface later in the film, but their real troubles begin when they run into three guys who were recently sent home from the Middle East with dishonorable discharges (the girls don’t find this out until later, but the reason is never 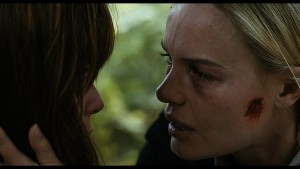 fully clear). Apparently, they’re on the island doing a little off-season deer hunting and are fully equipped for such an occasion, which might have had three more intuitive women running for the boat. But Abby recognizes one of them from their teenage years and invites them to have drinks by the campfire  (Questionable decision #2).

After an intoxicated Abby inadvertently kills one of them when his sexual advances threaten to turn into rape, the friends are forced into survival mode while the remaining two soldiers hunt them down in the woods. And, as expected, this is where the bonding actually begins; forgive and forget so we don’t get killed, emotional revelation, one plot twist, and on to questionable decision #3.

Not much new territory is explored here conceptually, but “Black Rock” is relatively entertaining nonetheless; if we expect something to spice up this bland concoction of cat-and-mouse plot points, it’s at least partially due to our desensitization to such material. The film’s biggest flaw is that it’s trying to depict intelligent, strong-willed women, but the characters often exhibit traits of ditsy B-horror movie heroines. It would have been nice to have a better understanding of what, if anything we’re supposed to have learned from this ordeal.

Still, Aselton’s reserved direction instills a fair degree of suspense at times, even if it doesn’t develop to its full potential, and the all three leads are committed to their against-type roles (particularly Aselton and Bell, who have a few very bold scenes), despite their inconsistent development. Duplass, who was involved in three of my favorite films of 2012, likes to let things ride on dialogue; that works in films like “Jeff, Who Lives at Home” and “Cyrus”, but in this foray into thriller territory, he leaves us adrift. Regardless, I say good for Duplass and Aselton for trying a different genre on for size.