I really like it when prequels have some fun with the mythos presented by the original film. The Thing from 2011 was a good example of this, dovetailing nicely into John Carpenter’s original The Thing from 1982. Monsters University, the latest from Disney/Pixar, builds into 2001’s Monsters, Inc. quite well, helping to set up characters we’ve been familiar with for some time now. While the story and morals are typical of a Pixar film, Monsters University takes the Toy Story route, aiming its attention at the original’s first audience and maturing along with them, even though the story is a chronological step backward.

It’s fun to watch returning characters speak to their audience as they grow. A lot of kids that saw Monsters, Inc. upon its original theatrical release are now entering a different phase in their lives, much like Mike Wazowski (Billy Crystal), the central character in this go-round. Inspired by a grade school field trip to Monsters, Inc.’s Scare Floor (where he later will work, as evidenced by the original film), Mike dedicates his young life to becoming a professional Scarer, idolizing the Scarers that wrest the most Scream Energy that provides the power for the Monster world. One of these Scarers bestows his Monsters University hat on him during this field trip, and Mike makes it his life’s work to attend the Scare Program at MU. 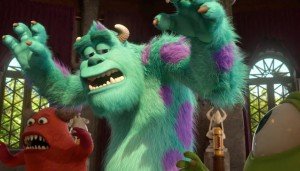 Kids who saw Monsters, Inc. twelve years ago are now at the age where they’re making the exact same decisions that Mike is making regarding school choices, wondering what extracurricular activities to join, what kind of friends to make, and whether or not to join a campus Greek society. Being in the Scare Program exposes Mike to two different people: the first is the meek Randall Boggs (Steve Buscemi), who starts the movie as the polar opposite of the person he winds up being, and the second is Joseph “Sully” Sullivan (John Goodman), a lackadaisical student who’s the son of a famous Scarer. Randall, along with Mike, has to work hard at being scary, finding their strengths and weaknesses over the course of the movie; Sully simply relies on his size and father’s reputation to get by.

Their real-life analogues that so readily populate America’s college campuses will no doubt strike a chord with audiences young and old. For younger viewers, they’ll see a neat story about being one’s own true self and making sure you surround yourself with people who matter. Older audiences will no doubt view Monsters University as a thinly-veiled remake of John Landis’ National Lampoon’s Animal House, almost replete with fraternity antics and the humiliations that come along with being the “weak guys on campus” (mostly coming from a character voiced with uppity stuffiness by Nathan Fillion).

Monsters University boasts some of Pixar’s best work, making  computer-generated characters as photorealistic as I’ve ever seen them. Also, the returning voice cast inhabits their roles well, at once being fresh while maintaining their inherent familiarity. Most importantly, the script balances well between being a college movie and a children’s movie, never condescending or being too heavy with its morals to the point of impeding the film’s enjoyment. The “sequelitis” that marred Cars 2 graciously escapes this movie, with Monsters University standing tall alongside its predecessor as two of Pixar’s finest.