Posted by Michael Parsons on December 21, 2012 in Movie Reviews / No Comments

(This review was originally published on December 21, 2012 at Reel Film News)

I’m not sure which is more unsettling about Juan Antonio Bayona’s “The Impossible”, the visceral punch felt when the wall of water is shown barreling through a peaceful beachfront resort in Thailand, or the means that the director uses in order to turn the 2004 tsunami into a marketable movie. 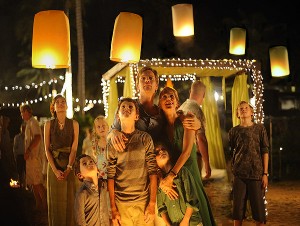 Objectively, it is well made and very effective, particularly in the first half, as the story focuses on a British family who are violently separated the day after Christmas by the sixth most devastating natural disaster in recorded history. Though it is depicted with gruesome, vivid detail, “The Impossible” is not a ‘disaster film’ in the Roland Emmerich sense of the word; nope, here the embellishments are limited to changing the ethnicities of the main characters, and perhaps some dialogue that assists the film in ascending from murky tragedy to enlightening triumph (if you were at all wondering about the generic title).

It can’t be ignored that the plight of the Spanish family that inspired the story is swapped for wealthy Anglo-Saxons Maria and Henry (played by Naomi Watts and Ewan McGregor), a narrow focus that almost downplays the scope of the disaster which killed over 230,000 people in several countries, including Indonesia and India.

But supposing that this is the point of the film, to tell the story of a family trying to find one another in the most difficult circumstances imaginable as opposed to creating a broader, effects-laden disaster flick, will help you see it as a worthwhile, albeit unpleasant experience. The fact that, for the most part, it doesn’t focus on anyone else, namely the indigenous population that is essentially laid to waste in effected areas with countless homes and lives lost, has resulted in a fair amount of controversy. 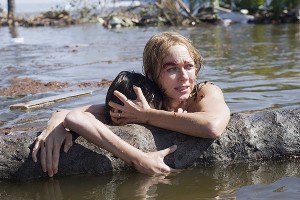 I mention that, as I’m sure countless critics have been compelled to do, in order to say this: regardless of its politics, the film will leave you moved, maybe even a little mentally bruised, whether you agree with its approach or not. For the better part of the film, mainly for Watts’ character Maria, who is battered about by rushing water and floating debris (to a point that I was perplexed by its PG-13 rating), there is a complete uncertainty about the magnitude of the event (from her perspective). Bayona, who directs from a script by Sergio G. Sánchez (as he did in 2007’s “The Orphanage”), does a good job of making us feel that isolation, even from the standpoint of McGregor’s character who spends most of his time on dry land with the two younger sons frantically searching hospitals for Maria and their oldest son Lucas (a grueling performance by Tom Holland).

“The Impossible”’s intensity only falters in the final act when trying to satisfy mainstream marketability – or at least, that’s what it feels like – with dialogue that seems like it came from another movie. I hesitate to use the word melodramatic, but there’s an appreciable shift from the film’s gritty, palpable intensity to a contrived sort of ‘Hollywood‘ feel that threatens to lump this ordeal, which is more than worthy of being told, with films spawned by events of far lesser relevance. Still, it’s a viewing experience that people with strong fortitudes should have at least once; at its best, it is a deeply emotional film, and Naomi Watts reaches a new level of dedication in her role.