Posted by Michael Parsons on December 20, 2012 in Movie Reviews / 1 Comment

(This review was originally published on December 20, 2012 at Reel Film News)

Sometimes Judd Apatow reminds me of that kid that accidentally does something funny and gets some laughs, so he keeps trying to reproduce the moment over and over. I’m not saying “This Is 40” isn’t funny; in fact upon a second viewing, I let loose a few guffaws during some scenes that I’d almost forgotten about. But it’s hard to say that this fourth feature film from the writer/director is anything new. Because so many of its great moments are swallowed up by the monotony of the whole thing, it ends up being kind of forgettable. 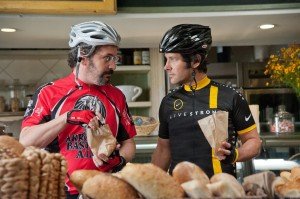 It’s not that the film isn’t relatable, relevant or even heartfelt. In fact, there are moments that are right on point for people – particularly parents – of my generation. But for an adult comedy addressing such a ‘milestone’ as turning 40, along with its mid-life crises and financial issues, many of the scenarios aren’t much more clever than what we’ve seen from sitcoms over the last decade. Plus, it doesn’t seem like even a fragment of Apatow’s script ended up on the cutting room floor, resulting in an almost inexcusable running time for such fare (it’s roughly the length of the last Bond film). Don’t worry though, it does get better than the requisite Viagra discussion that opens the film.

In this ‘sort-of’ sequel to 2007’s reasonably funny “Knocked Up”, Paul Rudd and Leslie Mann (Apatow’s real-life spouse) reprise their roles as Pete and Debbie, a married couple whose typical issues and middle-aged behavior are represented with more of the borderline bland ‘pseudo-improv’ style of dialogue that somewhat re-invented the comedy genre with Apatow’s first (and funnier) feature “40 Year-Old Virgin” in 2005. Hey, we get it – you guys really have a way of expounding upon the state of your privates with colorful metaphors and hypotheticals. It was funny for the first ten wandering, seven-minute monologues, Judd. Now it just seems like you’re trying too hard. 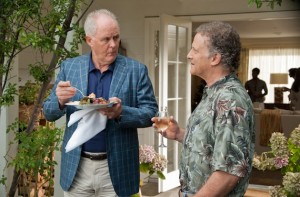 Some of the other revelations that come with the big 4-0, suddenly realizing your musical taste might be aligned with the senior set, for example, are given too much importance, and sometimes make the characters feel older than they are supposed to be. It’s a good thing the cast works together so organically, particularly the two leads and their hilariously precocious daughters (played by Iris and Maude Apatow, not a coincidence) who have some priceless verbal exchanges throughout the film. Sometimes it’s hard to tell if they’re acting, or just reacting.

There’s also something to be said for the supporting cast, which includes Albert Brooks, who’s as dry as ever as Pete’s dad, and Megan Fox as Debbie’s promiscuous clothing store employee Desi, who since “Friends With Kids”(2011) seems to be finding slightly more depth with her ‘rom-com’ roles. Jason Segel returns from “Knocked Up”, as if only to remind us – yes, this is indeed an ‘almost’ sequel as advertised, no matter how thin the tether.

During its moments of heavy laughter (of which there are more than a few), as well as deep sincerity, I really enjoyed the film. Problem is, it gets old, and it feels every bit its length, which no good film should; it allows us too much time to be annoyed, and I reached that state several times. This disappointment could have been rectified with about a 30 minute trimming, and perhaps a little less complacency from the comedy auteur; like the myriad other comedies that credit him as a producer (“Bridesmaids”, “Get Him to the Greek”, “Pineapple Express”, I could go on) it seems to have difficulty knowing when a joke has peaked.