Posted by Michael Parsons on December 23, 2012 in Movie Reviews / No Comments

(This review was originally published on December 23, 2012 at Reel Film News)

Director Jacques Audiard (“A Prophet”) gives us just enough hope and decency to chew on in the French-language film “Rust and Bone” (“De rouille et d’os”), which foregoes any notion of a traditional romance in favor of a grittier, to-the-point attitude. Virtually the antithesis of the Hollywood love story, the screenplay works hard to create an emotional realism around circumstances that most American filmgoers would usually accept as ‘movie kismet’, showing the ugliness of life that sometimes precedes the happy snapshot we see on the cover. In short, it earns the less-than-conventional plot that I’m about to summarize, mainly because it avoids being overly sympathetic. 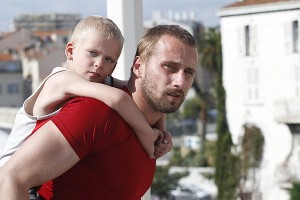 Downtrodden Ali (Matthias Schoenaerts, “Bullhead”) moves with his five-year-old son Sam (impressive first-timer Armand Verdure) to his sister’s house in the south of France, where after picking up an odd job as a nightclub bouncer he encounters Stéphanie (Marion Cotillard, “The Dark Knight Rises”), a killer whale trainer at Marineland. This might sound like an adaptation of a Nicholas Sparks novel so far, but the film is about as matter-of-fact and unapologetic as Ali, who re-connects with Stéphanie some four months later after she loses her legs in an accident at work.

When an ‘undefined’ relationship develops between the two, so does an unusual co-dependence, which remains partially veiled until later in the film, after Ali takes his skill set to the underground boxing circuit. At times feeling like a mash-up of “Soul Surfer” and “Warrior” (if poured into a relationship film and given a liberal treatment of sexuality as a natural component of the human condition), “Rust and Bone” moves from uneven to awkward to reasonably rewarding, and takes a little while to sink in. Audiard, who co-wrote the screenplay with “A Prophet” collaborator Thomas Bidegain (from a story by Craig Davidson), reserves the first part of the film for getting under the characters’ skin, though I found it hard to fully get a grip on their intentions. 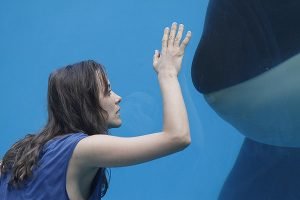 It almost requires me to wander into spoiler territory to explain why I ultimately liked a film that I was so apprehensive about at around the one-hour mark, but I’ll reserve myself to suggesting it based solely on the talent involved. Schoenaerts plays with unwavering intensity a man who doesn’t know how to be a father, and whose priorities are so far out of whack that his moral compass is in a perpetual state of calibration; Cotillard shows a more than believable progression from depression to determination as a woman on a quest to get her life back without stumbling too far into hokey spiritual revelation.

“Rust and Bone” is more stirring than depressing, and it stays interesting – if not slightly erratic – for the duration. It’s translation is not as distorted on this side of the pond as some recent foreign language films, perhaps because the universal woes that it taps into transcends the idiosyncrasies of our different cultures.

For Washington, DC area folks, “Rust and Bone” is playing at Landmark’s E Street and Bethesda Row Cinemas, as well as the new Angelika Film Center in Fairfax.