Posted by Michael Parsons on June 4, 2012 in Movie Reviews / No Comments

(This review was originally published on June 4, 2012 at Reel Film News)

Laced with incongruous humor, “U.N. Me”, just like its title, should have been much better. As a documentary tallying the transgressions of the United Nations specifically over the last two decades – from Rwanda to Darfur – there’s something unnerving about its attempt to be clever, like someone who giggles at a dinner party when they’re nervous. That said, the film’s message should be taken very seriously, regardless of its uneven presentation; it varies from showing blatant misappropriation of resources to outright abuse of the U.N.’s unique position in the world, including its progressively self-preserving infrastructure and the hypocrisy of who is currently seated on both their Security and Human Rights Councils (sorry folks, no spoilers here!!!).

And, if one thing might be learned based on the statistics in this scathing criticism, it’s that the U.N. Peacekeepers should stop driving marked vehicles. Seriously.

Okay, like any other political commentary, “U.N. Me” is a bit lopsided, but the purported facts are disturbing nonetheless. First-time writer/producer/directors Ami Horowitz and Matt Groff, who run this exposé with an almost “Daily Show” style of journalism, are undoubtedly angry, just like the audience they’re aiming for (I’d hope I’m not in the minority regarding certain issues). But like everything this important, it demands examination. 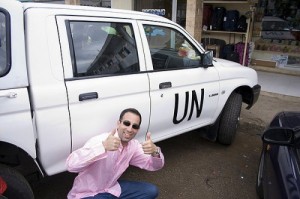 Initially looking at U.N. Peacekeeping missions that sometimes result in vacation opportunities, negligence and even rape, this commentary manifests itself in sarcasm, which is hit or miss here; there are some mind-boggling realities that reflect the pocket-lining tendencies in this international union whose mission statement has become increasingly self-indulgent since its inception in 1945. Unfortunately, much of this effort’s credibility is lost in the filmmakers’ erratic design, impeding its effectiveness with what might sometimes be misconstrued as parody.

From documented negligence that would have prevented the Rwandan Genocide in ’94 to the bogus ‘Oil for Food’ program granted to Saddam Hussein, the film doesn’t mince words or opinions. I suppose if not, it might be worthless, though sometimes it feels quite literally like there’s an editing issue here. There’s a random clip of Richard Simmons inserted in to an interview with an Iranian ex-official about ‘human rights’ regarding gays which is, in my opinion, pretty insulting.

These partisan-polarizing elements might clash with the Michael Moore set, if you care, and perhaps folks that wonder why the U.N.’s successes are overlooked here; objectively that might make sense, but in my opinion, an act of upholding one’s duty doesn’t cancel out their atrocities. There’s rarely a ‘best of’ in politics, often for lack of material.

There’s a segment in the film regarding the U.N.’s insulation of countries like Iran who are suspected of developing nuclear weapons, and Syria, who is known to have harbored terrorists, followed by a clip from “Team America World Police” in which a puppet-version of Kim Jong Il gives a flimsy confirmation to a U.N. official that he possesses no weapons of mass destruction. It’s pretty funny. I think that’s the problem. If you go ahead and watch that entire movie followed by a few hours of Fox News Channel and then chase it with “Fahrenheit 9/11”, you should feel adequately balanced.

One way or another, “U.N”. Me will infuriate you. If you wish to find out how, it’s in limited theatrical release now.