Posted by Michael Parsons on May 31, 2012 in Movie Reviews / No Comments

(This review was originally published on May 31, 2012 at Reel Film News)

“Take This Waltz” is an awkwardly paced romantic drama that puts its stock in aesthetics rather than dynamics. A mundane story spiked with character-defining eccentricities, its plot progression is manic but without much substance.

Michelle Williams (“My Week With Marilyn”) plays Margot, a young Toronto woman whose insecurity blends with a capricious charm when she meets Daniel (Luke Kirby, “Samaritan”), a starving artist type who moonlights as a rickshaw driver in the suburbs where they are neighbors. But her whimsy soon turns into immaturity as the relationship develops. You see, Margot is happily married to Lou (Seth Rogen, “Funny People”), or so she says; the attraction to Daniel, which is presented like a force of nature, is undeniable. Or at least that’s how we’re supposed to perceive it. She resists temptation for what seems like an eternity. 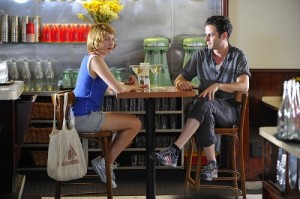 There isn’t much new or compelling about “Take This Waltz”, a story that resembles a handful of mediocre contemporary romantic dramas, although it seems like it’s trying really hard to convey something unconventional. It’s not that writer/director Sarah Polley (who you’ll probably recognize more from her acting resume) isn’t an impassioned filmmaker; to the contrary, her direction is clever, artistic and very attentive to the characters and their idiosyncrasies. The problem is, most of these characters aren’t very appealing, and the script, which could have been written by a fly on the wall, feels pretty stagnant.

I didn’t see “Away From Her”, Polley’s feature debut as a director, but I imagine that “Waltz”, which  became popular on last year’s festival circuit, will be her style-defining work. That said, there’s not much to the script, and the twenty minutes leading up to the final scene feel almost completely extraneous. It’s lingering frames, closeups and ethereal mood are often yawn-inducing. Is this what it would look like if Terrence Malick tried his hand at romantic drama? 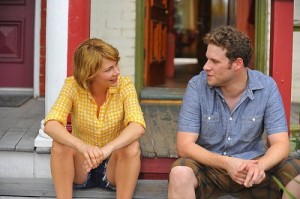 One of the things I liked about this film, and there are only a few, is that Seth Rogen, who is completely unplugged from his usual comic persona, nails a career-broadening role. Lou is complex, but not in an obvious way; he’s content but senses a conflict in his marriage to Margot, and he’s a character you truly feel sympathy for. Another is Sarah Silverman as Lou’s recovering alcoholic sister, who in only three or four scenes, adds a much-needed dimension to the film as a slightly less profane version of herself.

Given a poignant retrospective in order to make the moral of the story blatantly obvious, “Take This Waltz” feels like it was written for a handful of film students to exemplify the domestic character study. With that in mind, there’s not enough spark between the three of them to make either the affair believable or the marriage worth caring about. Polley is undoubtedly a competent, creative director. But for a film that’s all about delaying gratification, it doesn’t seem worth the wait.