Posted by Michael Parsons on June 22, 2012 in Movie Reviews / No Comments

(This review was originally published on June 22, 2012 at Reel Film News)

Though maybe not the most well-executed documentary I’ve ever seen, “Cape Spin: An American Power Struggle” could be the most unbiased political account in recent memory. Directors Robbie Gemmel and John Kirby compile footage from a decade-old controversy surrounding Jim Gordon’s Cape Wind project, his plan for a massive system of wind turbines set five miles off the coast of Cape Cod in the Nantucket Sound as a renewable energy source – which would be the largest of its kind in the U.S. to date – and covering an area roughly the size of Manhattan. The plan was finally approved by the Federal Government in April of 2010, but is still being met with much opposition from various groups.

Most powerful and influential of these groups is The Alliance to Protect Nantucket Sound, a campaign led by Audra Parker, who is concerned that the project will simply produce more revenue to line the pockets of an energy conglomerate masquerading as an environmentally conscious, proactive entity. As a clean energy endeavor, this might seem like a no-brainer, but the company was, at the time, fresh off an approved plan for a massive diesel plant upstate, across from a school, no less. Are they just dipping into the Green Energy pool? Does it matter? 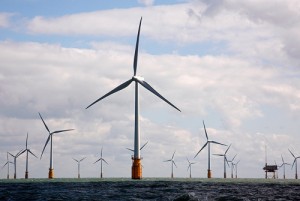 On the other side of the coin, Parker’s group has been pegged by proponents of Cape Wind as representative of the small elitist population, protecting their real estate interests, with neither the greater good nor the majority of the area’s population in mind. Are they disconnected from the concept and global impact of renewable energy, regardless of whether the energy company is making a buck? Or is it really the local wildlife they’re concerned about? They claim to approve of the idea, as long is it’s not visible from their shores. But they could also be protecting the local environment.

Full of statistics and valid arguments from both sides, this film observes a political ping pong match that dredges up some fascinating stuff, so to speak. It is also a bit exhausting. To date, this ‘power struggle’ has cost both groups a collective $70 million; you have to wonder how much time it would take to recoup that in energy savings.

“Cape Spin” initially seems like it will develop into the typical Democrat vs. Republican stalemate on the same old environmental issues – global warming, pollution and such, eventually falling in their respective directions – but becomes dramatically more complex, finding its footing in small-scale political warfare (including a weigh-in from the Kennedys, for good measure). Conversely, the film thrives when it opens up this community feud to a potential global impact, and allows its subject to make a statement of its own. Typical of these types of documentaries, however, it is pretty choppy and inserts about twenty minutes of extraneous footage; its message(s) would be more concise at 60 minutes. With the exception of including some “Daily Show” coverage from a few years ago, the film fumbles its attempt at being humorous; for a documentary about energy, it runs out of creative steam pretty quickly. But “Cape Spin” is strong where it counts. The filmmakers do an unusually good job of avoiding their own agendas and ultimately deliver two solid viewpoints to debate with your peers, whether you live in Cape Cod or Washington, DC.