Posted by Michael Parsons on February 3, 2012 in Movie Reviews / No Comments

(This review was originally published on February 3, 2012 at Reel Film News)

The protagonist is a tricky role to identify in the complicated, often cruel world of post-adolescence. Such is the case in “Chronicle”, a film that consolidates several of the oddball sub-genres that have emerged in the past few decades. The basis is the classic teen angst story; if ever that topic were to be addressed with such realistic and sobering style, I’d immediately think of the film “Kids” in 1995. Next is the economical ‘found-footage’ style of filmmaking that was introduced in 1999 with the “Blair Witch Project”. On the opposite end of the spectrum is the super hero movie, something that never seems to go out of style. 2010’s “Kick-Ass”, a surprisingly dark, brutal commentary, exemplifies the plight of an awkward, introverted teenager turned vigilante. Now we have “Chronicle”, a film that encompasses all of those ideas and pours them into a science fiction film.

“Chronicle” is much more than just the next ‘found footage’ film, though the style might be hard to ignore for the first fifteen minutes or so. The story follows three high school seniors in Seattle who gain telekinetic powers after discovering an ominous cavern containing a seemingly extraterrestrial object. Jumping immediately into their antics, the guys have varying ideas about how to use their newfound otherworldly gifts. It begins with harmless pranks (like moving people’s cars and a particularly humorous scene in a convenience store), and it’s evident that these kids have no immediate plans to do any sort of crime-fighting.

Though an amalgam of familiar themes, “Chronicle” is profoundly original in its treatment of the material. Director Josh Trank has created an interesting mix of “Hancock”, “Cloverfield” and “Stand By Me” that plays like a bizarro episode of “Smallville”. It also follows a similar plot progression to that of Stephen King’s “Carrie”, though this one never crosses into horror territory. The story is primarily about a repressed, abused outcast kid whose anger is a cauldron waiting to boil over, mainly a result of an abusive father, a terminally ill mother and a seemingly endless sea of bullies at school. This is no “Spider-Man”; in fact, it’s really not as much a superhero movie as it is the origin of one because there is no pre-existing ‘supervillain’. It’s more about a damaged soul who succumbs to his anger and explores the fragile line between good and evil. 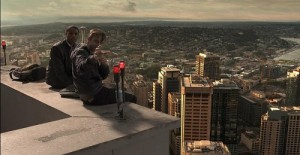 The meek Andrew (Dane DeHaaan) and his cool cousin Matt (Alex Russell) run in different circles, but maintain a friendly, though limited relationship. Andrew’s father (Michael Kelly) is an ex-fireman whose injury has reduced him to collecting disability and hitting the bottle. As Andrew eventually gains popularity and develops his powers, he bonds with Matt and popular class president hopeful Steve Montgomery(Michael B. Jordan) with whom they discovered the anomaly.

This is all being chronicled through Andrew’s video camera, which he purchased to document his domestic issues.

With his first feature, Josh Trank has made a change to the WB dynamic that normally dominates these types of teen-related movies. Perhaps he’s the next incarnation of Joss Whedon for the modern-day genre crossover. As weary as I’ve grown of this ‘student-film’ style of filmmaking, it’s usually because it is misused as a lazy means of generating revenue. In “Chronicle”, the special effects are much more interesting when rendered this way (apparently the film cost a light $15 million). I also found that this initial approach added a personal touch to something that normally would have been overblown. On the other hand, certain scenes might have benefited from a more traditional approach. Trank’s commitment to maintaining an intimate perspective with such an ambitious story sometimes proves as tiresome as it is effective; before the film ramps up to its climax there are some tedious moments. 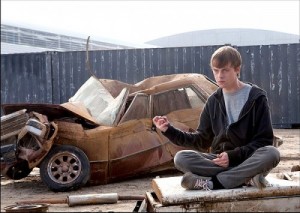 Screenwriter Max Landis (son of legendary director John Landis) might have inadvertently thrown a curve ball to audiences who were expecting something more along the lines of a horror movie; the first fifteen minutes have all the tell-tale signs of one. Either way, “Chronicle” becomes so entertaining that I think you’ll make it through its compact 82-minute running time regardless of your genre preferences. Personally, I found the second half incredibly moving; by the time the forced involvement of the video-cam starts to become an impediment to the progression of the story, the film shifts into an outside perspective and saves itself from becoming contrived. This shift is particularly effective in conveying the intensity as Andrew begins to lose control, regardless of its inconsistencies.

There is a predictability about “Chronicle”, but the play-by-play is far more interesting than the endgame. Ultimately, this is straight-up science fiction, particularly when the three discover that they are able fly. We learn that the stronger they get, the more dangerous they become. After the first 45 minutes it’s not as much about who will prevail but who will survive, and the key is that Landis’s screenplay makes you sympathize with almost everybody involved. Though it seems to have been classified as a ‘found footage’ film, that particular method usually only applies to events that have otherwise been unseen. But since this particular ‘chronicle’ unfolds in front of the entire city of Seattle, I’m not sure it could be categorized as such. Regardless, the film’s commitment and style will show in DeHaan’s eyes; by the end he looks like a furrow-browed hybrid of Leonardo DiCaprio and Nick Stahl. “Chronicle” shows us what the capabilities of a teenager might be if he could unleash his unanswered frustrations on the world.