Posted by Michael Parsons on February 10, 2012 in Movie Reviews / No Comments

(This review was originally published on February 10, 2012 at Reel Film News)

“You know what they say,” says Wally Winthrop (Abbie Cornish) at some point during the rambling drama “W.E.”. “Expectations lead to disappointment.”

Luckily my level of anticipation was in neutral going into the film; only a few lines of dialogue are delivered with that level of simplicity and wisdom.

And that’s not enough to carry Madonna’s second outing as a director (her first was 2008’s “Filth & Wisdom”), a whirlwind of ideas that land arbitrarily in a two-hour framework from a script with co-writer Alek Keshishian. This cross-pollination of romance, history, pop culture and apparent award season Hail Mary is more schizophrenic than inspired.

“W.E.” is an observation of the 1930’s love affair between King Edward VIII and American socialite Wallis Simpson, subsequently the Duke and Duchess of Windsor, as it parallels the fictional life of a young woman in 1998 New York during her deteriorating marriage. The first story was, at one point, controversial; Edward VIII abdicated his throne to be with Simpson, who at the time was still working on her second marriage. 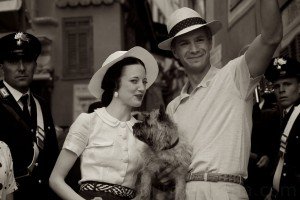 In the days leading up to the 1998 Sotheby’s auction of Wallis and Edward’s (‘W.E.’, as the acronym would have it) Windsor estate, Wally becomes enamored with their story (she was named after the Duchess, perhaps compounding her infatuation)as she admires the royal collection. In an impatient, convoluted narrative, “W.E.” awkwardly intertwines the two stories, one historical in basis and the other fictional, with very little rhyme or reason for the similarities. One moment in particular is the unpleasant opening to the film depicting Wallis’s abusive first husband, a scene that tethers itself to a later occurrence in Wally’s timeline.

Perhaps the biggest issue is that the royal subjects of the historical portion seem neither interesting nor interested. James D’Arcy plays Edward (referred to informally in his time as David) without much energy, making it difficult to believe that his apparent ‘possession’ with Wallis would cause him to relinquish anything more than the title to a Jaguar. Though Andrea Riseborough’s portrayal of Wallis is competent, she doesn’t exude the appeal we would expect of a woman who had sparked such a controversy.

Amisdt these choppy moments that bookend the film’s 60 year span are dreamlike overlaps where the two women ‘meet’. “Darling, they can’t hurt you unless you let them,” imparts Simpson upon Wally. I believe she was referring to the men, who in both worlds are either vilified or glorified, with out much in between. This includes the king’s brother, whose succession of Edward is recounted in a far superior film called “The King’s Speech”. 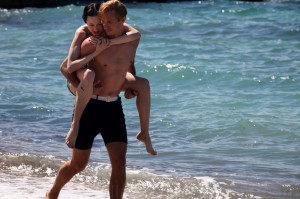 Perhaps the only redeeming dynamic is between Cornish and Oscar Isaac, who plays a chivalrous security guard that Wally befriends at Sotheby’s. Unfortunately, the rest of “W.E.” lacks that chemistry and the elegance it so desperately attempts to portray; its luster is derived from the couple’s possessions rather than their charisma. The film becomes an insufferably superficial glamfest, a tale of love and sacrifice that packs about as much emotional punch as “Truth or Dare”. Like a cologne ad, “W.E.” is difficult to take seriously. In between arbitrary close-ups, voice overlaps and location changes, we’re left with about as much time to click with the key players as a Michael Bay movie. It’s apparent this one is much more about the Cartier than the characters.

Either of these stories might have been mediocre on their own, if only a bit more cohesive. But as half period piece, half contemporary drama, the film works as neither. The similarities are forced, and the shared woes of the two women become ridiculous, as if their timelines collide in an alternate universe that never justifies its reason for existing. Madonna’s directorial style feels like it’s calibrated to the sensibilities of a teenager, but the subject matter probably won’t appeal to anybody under thirty, making its initial intentions hard to read. I’m sure there was a lot of passion behind this project, but it seems Madonna and Keshishian might have over-extended themselves here. By the end, “W.E.” is mostly about regret, something you might find sticks with you a while after you leave the theater.