Posted by Michael Parsons on January 22, 2012 in Movie Reviews / No Comments

(This review was originally published on January 22, 2012 at The Rogers Revue)

It’s nice to see an action film that doesn’t complicate things just for the sake of looking smart. As much as I enjoyed most of the spy films from 2011, we saw almost every variation and mind-boggling complexity that the genre had to offer. In “Haywire”, which was initially slated for release early last year, we are treated to 90 minutes of undiluted action that stays within the boundaries of physics (and our attention spans) and out of the confusing details. 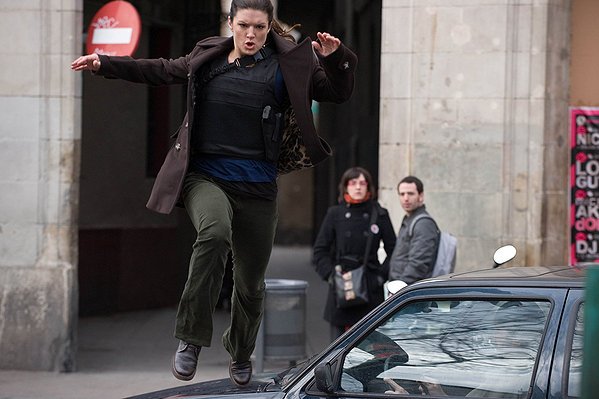 With so many Angelina Jolie and Milla Jovovich films inadvertently mocking female action leads (which is usually a result of the script), it’s fun to see non-Hollywood female talent like mixed martial arts star Gina Carano, who is as physically powerful as she is appealing, in a starring role. Director Steven Soderbergh takes the same approach with “Haywire” as he did when he cast “The Girlfriend Experience”(2009), two diametrically opposed films with women pre-programmed for their roles. In “Haywire”, her first feature, Carano fits nicely into the skin of Mallory Kane, an ex-marine who does contract work for the government and is betrayed by her superiors. Written by Lem Dobbs, this film takes a similar tack to that of the “Bourne” series, as Kane works her way through the network to exact revenge.

Contrasting Soderbergh’s usual penchant for multi-tiered stories like “Traffic” and “Contagion”, “Haywire” is designed for a single protagonist confronting her enemies one at a time, and the pace is set quickly. The film opens with the best close quarters hand-to-hand combat scene since the hallway skirmish in “Grosse Pointe Blank”; in this case, it’s Carano and Channing Tatum duking it out in an upstate New York diner. But this is no “Mr. And Mrs. Smith”, and it gets brutal quickly – though it becomes apparent that she reserves killing only for the ones who really deserve it.

It all boils down to an extraction job that Mallory was contracted to do in Barcelona weeks prior. Soderbergh keeps the film short and sweet, and doesn’t linger on too many frames, condensing Mallory’s flashbacks into small, artistic clips with brief black-and-white segments, fades and David Holmes’ trippy, off-key score. “Haywire” is otherwise a straight shot to retribution, coming to life after her boss Kenneth(Ewan McGregor) sends her to Dublin to rendezvous with a British Intelligence agent (Michael Fassbender). After she is double-crossed, the ‘whys’ and ‘hows’ are initially a mystery, though the ‘whos’ are easy enough to figure out even before they are dished their due punishment.

The action sequences are caught with a steady Red Digital camera (Soderbergh is also the cinematographer)in well-lit settings, so it’s easy to tell what’s going on. One scene in particular is a fight in the restricted space of a hotel suite, another is a car chase in a wintery New England forest. There isn’t much trickery with the camera during these moments, save the stuntmen (and perhaps a deer) who function as nothing more than rag dolls in Carano’s hands. “Don’t think of her as a woman,”  McGregor’s character cautions his conspirator. “That would be a mistake”.

“Haywire” reminds me a little of the ’70s and ’80s when the martial arts realm was filled with Hollywood talent. Conversely, it’s in an action film for the modern era, though it doesn’t concern itself much with technology or political mumbo-jumbo. I don’t know if the film is deep enough to send an empowering message, but the fact that Carano is actually able to inflict such damage upon her male adversaries will make a good counterpoint to Sam Mendes’s Bond installment “Skyfall” later this year. Though her range of emotion is kept reasonably limited, her acting isn’t half bad, especially in the presence of seasoned veterans like Michael Douglas, Antonio Banderas and Bill Paxton, who plays her father. In any case, Carano is, pardon the pun, striking.