Posted by Michael Parsons on July 29, 2011 in Movie Reviews / No Comments

(This review was originally published on July 29, 2011 at The Rogers Revue)

A movie with a premise like “Cowboys & Aliens” might draw plenty of unwarranted criticism from biased moviegoers, but its content isn’t as black-and-white as its title might suggest. Jon Favreau’s $180 Million blockbuster-to-be is unquestionably an epic, but it unwittingly parlays its winning premise into a veritable roulette wheel of formulaic fallbacks, diminishing its confidence as a genre crossover. That being said, it’s also an ambitious and well crafted sci-fi action film that transposes elements from a tired theme with a fresh setting in an effort to revitalize a story that dates back to the 1950s. 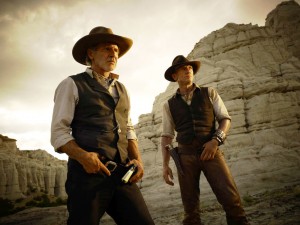 The project is host to a team of producers helmed by Steven Spielberg (whose Dreamworks partnered with Universal to purchase the film rights in 1997) and a band of writers including Alex Kurtzman (“Star Trek” (2009) and “Mission Impossible III”). The film, based on a story and subsequent graphic novel by Scott Mitchell Rosenberg, endured a 14-year journey to the big screen, amassing every producer and screenwriter under the sun. Set in 1873 Arizona, the film opens on a strong note as Jake Lonergan (Daniel Craig) awakens in the middle of the desert with amnesia, wounded and sporting a massive ‘iron’ bracelet. After being accosted by a group of men that he swiftly and brutally dispatches, Jake finds his way into Absolution, a town that is apparently under the thumb of hard nosed ranch owner Colonel Dolarhyde (Harrison Ford). The town Sheriff (an amicable Keith Carradine) recognizes Jake as a fugitive and has him incarcerated with Dolarhyde’s son (Paul Dano), an obtuse ne’er-do-well who is protected by his father’s frightening reputation. As Jake has flashbacks that allude to his circumstances, he is approached by the mysterious Ella (Olivia Wilde), a striking town local who has an unusual interest in where he’s been and the origin of his bracelet. But when Dolarhyde returns to town that night to demand his son’s release, it is discovered that Jake may be the very outlaw that recently robbed a stagecoach stocked with his gold.

This is a terrific movie so far, and the anticipation of the impending alien invasion feeds  the intensity (the title would suggest that aliens will make an appearance at at some point) as conflict mounts between the three parties. Surely enough, lights descend from the clouds  and then disperse with an eerie subtly reminiscent of “Close Encounters of the Third Kind”, segued into a small-scale version of “War of the Worlds” that rivals even Spielberg’s direction. 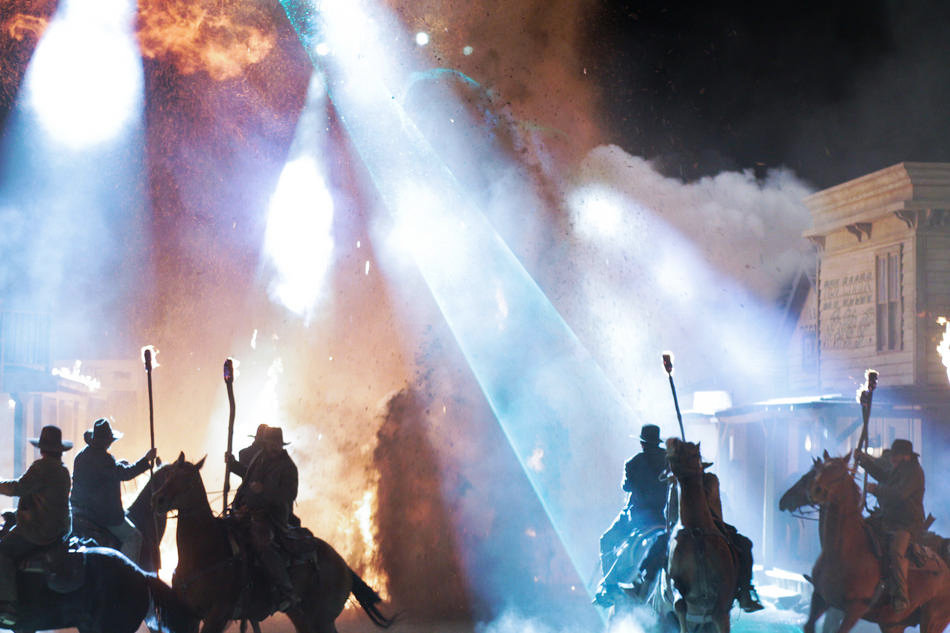 The film boasts a nearly perfectly cast. Craig and Ford are natural in their raw and weathered roles, but the supporting cast accentuates the dynamic throughout, notably Sam Rockwell as ‘Doc’ the saloon bartender and Clancy Brown as the omniscient town preacher. Adam Beach plays Dolarhyde’s selfless ranch-hand and Walton Goggins (FX’s “The Shield” and “Justified”) as Jake’s backstabbing ex-right hand man, as he discovers that he’s affiliated with a band of roving stage-coach robbers that have turned on him in his unexplained absence.

Contrary to the simplicity of its title, this movie requires some compartmentalizing to objectively separate its strengths and weaknesses.  The cinematography (shot mostly in New Mexico) is phenomenal and the technical execution consistent, weakened only by the waning plot as it slides into monotony. “Cowboys & Aliens” doesn’t lose its footing until the second half, when it suddenly feels unsure of its priorities and digs into a rather contrived spiritual concept that would have been more effective if it wasn’t overloaded with special effects. Jon Favreau’s film is well-executed but see-saws between its Western roots and the potential to overhaul a dwindling sci-fi theme (most recently in “Battle: Los Angeles”). It ends up condemning itself by emulating lesser films. The first half captures the authenticity of a gritty western (with the exception of Craig’s extraterrestrial accessory) and then dilutes itself by absorbing too many textbook sci-fi characteristics, some swaying surprisingly (and embarrassingly) close to a few scenes in “Skyline”. 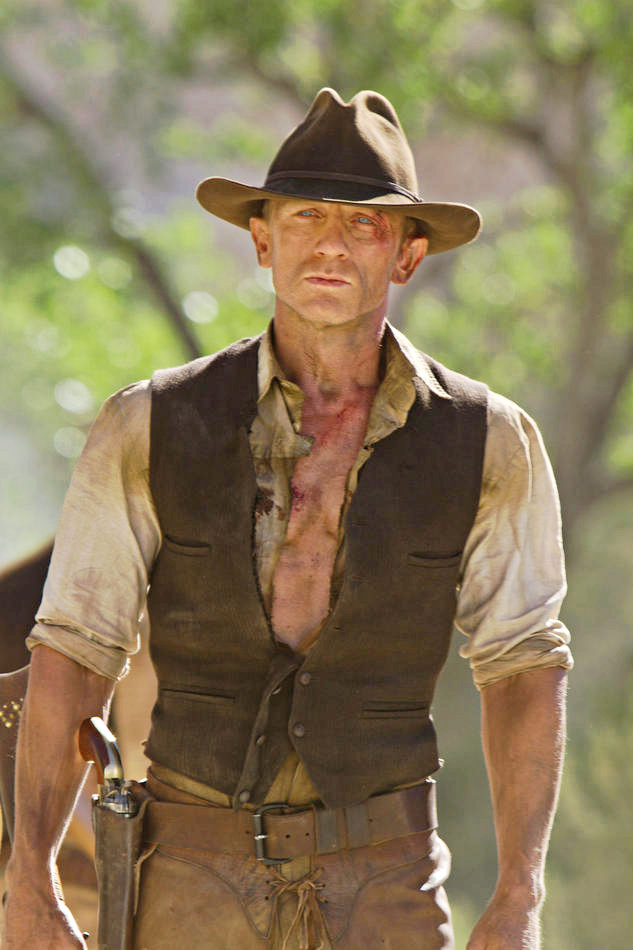 It’s curious that the popular theory of extraterrestrials inhabiting the Earth thousands of years prior to the existence of humankind (à la the “Predator” franchise) hasn’t spawned a deluge of big budget extraterrestrial ‘period pieces’, and perhaps this is the beginning of a new sub-genre. Needless to say, it would be hard to ignore a movie called “Cowboys & Aliens”, and I suppose this isn’t too bad a start. The human dynamic is the strongest part of the film, from its finely tuned character development to the gritty fight scenes, suggesting that this aptly choreographed western might have ended up resembling “3:10 to Yuma” if not for the sci-fi element. Though the movie eventually begins a by-the-book descent into a tiresome drone of CGI laden battle scenes, it suggests the thought of what the old West might have been like if every human being had fought together against a greater enemy.