Posted by Michael Parsons on July 29, 2011 in Movie Reviews / No Comments

(This review was originally published on July 29, 2011 at The Rogers Revue)

Mike Cahill’s ethereal tale of a young woman’s struggle for redemption, “Another Earth” is something of a visual poem, a minimalist rendering of a very large concept. The film’s ambition is laced with a quiet despair that feeds its ominous tone, effective in conveying the emotions of two devastated souls who develop an unlikely friendship. Regardless of its implausibility,  the sci-fi concept is transcended by a metaphor that is impervious to scientific scrutiny and is purposefully surreal, emphasizing that this film is more like Isaac Asimov meets The Sundance Film Festival than Carl Sagan’s “Cosmos”. 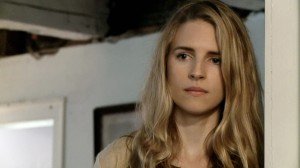 Imagine a celestial doppelgänger that mirrors Earth and its civilization, a fragile parallel reality that can shift at the drop of a feather like an interplanetary butterfly effect. The planet appears one night like an apparition, seemingly idle in the sky and identical in appearance. On the very same night, two people’s paths converge in a tragic car accident, dramatically altering the course of their lives. As their circumstances and the theories surrounding the anomaly start to overlap, one of them realizes they might have a second chance at life.

Now imagine that this astrological phenomenon is the least important part of the film. Rhoda (Brit Marling, who co-wrote with Cahill) is an aspiring 17-year-old  astrophysicist  who is celebrating her acceptance to MIT.  Driving home from a party, Rhoda collides with another car, leaving a man in a coma and killing his pregnant wife and five-year-old son. Four years later, Rhoda is released from jail and moves in with her parents. Tormented and reclusive, her will to start over is dampened by guilt and thoughts of suicide, dreaming of reclaiming some sliver of her future by winning a contest that will send her to ‘Earth 2′.  She has kept track of the man from the accident, John Burroughs (William Mapother), once a brilliant composer, now a struggling musician who lives in a neighboring town. Pondering life in an alternate reality, she takes a job as a custodian at a school, tortured by the memory of the fateful events and intent on confronting the man whose life she’s ruined. Rhoda approaches John at his home, but loses her nerve and winds up developing a friendship with him under false pretenses.

Rhoda’s wilted demeanor is depicted through a quiet slide show of her introspection that is scattered in cryptic fashion throughout the first half of the film, replete with narrative and haunting images of ‘Earth 2′. It feels organic  one moment and forced the next, reminiscent of Sean Penn’s direction if he had consolidated his techniques, ultimately resulting in some sleepy moments. Though the rendering often feels disconnected and sometimes arbitrary, Brit Marling portrays the destitute soul of her character as if purging her own demons and will hopefully garner the accolades she’s worthy of. William Mapother’s sullen performance has an improvised quality that is odd and relatable, balancing a wounded genius with someone that doesn’t want pity. The combination of her conflict and his resurrection is often heart wrenching and sometimes uneasy, but intentional in its unbalanced dynamic.

The supporting characters are few and of minimal significance, blending with the pallid complexion of the film and interacting without much interest (with the exception of Rhoda’s disproportionately snide brother played by Robin Lord Taylor). Jordan Baker and Flint Beverage play Rhoda’s mother and father respectively,  and Kumar Pallana as a prophetic janitor who is full of wisdom but fearful of the new planet. As we are informed of developments from ‘Earth 2′ through crackling news feed, the nucleus of the film remains around the two people that need each other to survive. 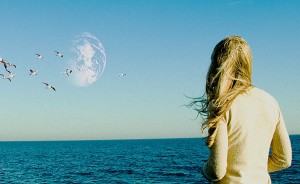 “Another Earth” takes a while to permeate your sensibilities, moody and remorseful as if the film itself possessed feelings. Though the premise might suggest a cerebral journey, it connects predominantly on a visceral level, often conjuring unexpected feelings but also so introverted that it  sometimes disconnects from the audience.

Some parts of “Another Earth” burrow comfortably between sorrow and indifference, and others feel as personal and sincere as a dedication, but ultimately the film’s optimism outweighs its somber subject matter. The film is an exercise in understatement, relegating the melodrama and science fiction to ‘Earth 2′ where it probably belongs. But the problems lie in the composition, not the content, and while Cahill never fully succumbs to the gravity of its beaconing depression it provokes the thought that perhaps this story might have been better told on Broadway.