Posted by Michael Parsons on July 22, 2011 in Movie Reviews / No Comments

(This review was originally published on July 22, 2011 at The Rogers Revue)

When a film taps into a recurring theme like the fabled existence of complication-free ‘relations’, it stands to reason that aspects of its script would appear like faded remnants of rom-coms in the past. These days it’s hard  to talk about anything relevant to modern sexuality and relationships without inadvertently naming a handful of clichéd movie titles, and you’d think that “Friends With Benefits” would be no exception. Surprisingly, it is. 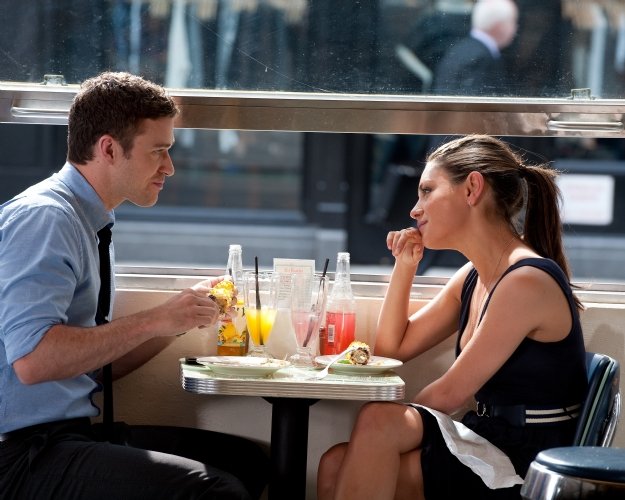 Instead of eschewing this notion of rehashing a trite premise, director (and co-writer) Will Gluck embraces the traits of romantic stereotypes and creates an uncomplicated if not self-aware comedy about two twenty-somethings pursuing a ‘physically exclusive’ arrangement in New York City. Dylan (Justin Timberlake), an ambitious art director working in Los Angeles, is flown out to New York by Jamie (Mila Kunis), a high level corporate headhunter, to interview for a coveted position at GQ. When Dylan is offered the job but still not sold on making the transition, Jamie wins his favor with a ‘non-touristy’ night out in Manhattan, finally convincing him to sign the one year contract with her client. As the two develop a friendship and begin to commiserate about their romantic shortcomings, the platonic element of their relationship inevitably collapses (under the flimsy analogy that sex would be “just like playing tennis”), and so is spawned the title of the movie.

Timberlake, who vehemently disagrees with the rom-com stigma attached to the film, plays the role of Dylan to the affable tone of a Ryan Reynolds character, comfortably walking the line of his ‘emotional unavailability’ without falling into the shallow trappings of the typical single male go-getter. Kunis tempers her co-stars blossoming comic prowess with an equally quick wit, balancing Jamie’s emotional baggage with her intrepid spirit and determination as they vow not to break their fragile pact. The characters actively avoid the clichés that they denounce in the movies, ultimately undermining the very stereotypes that would otherwise be bestowed upon them, freeing them up for some genuinely funny dialogue.

This is a film that benefits from its simplicity, a cumulative effort by the writers to focus on dialogue and minimize clever plot developments. Keith Merryman, David A. Newman and director Will Gluck  (who wrote the screenplay from a story by Merryman, Newman and Harley Peyton) have managed to create a solid enough framework with a few extraneous scenes about midway through its 109 minute running time. Gluck’s banter-style of writing, which is exemplified best by the short lived TV series “The Loop”(2006), was tailored for its two main characters who would resemble something of a throwback to the 1940s if not for the subject matter.

The supporting cast ranges from Jamie’s slightly overplayed and verbose hippie mother (Patricia Clarkson) to Dylan’s sweet but troubled father, played by Richard Jenkins in a pivotal role that really keeps the final third of the movie grounded. Jenna Elfman is a pillar as Dylan’s sister, his emotional conduit and confidant. Woody Harrelson plays the ‘alpha male’ at Dylan’s office, a gay veteran sports writer who doles out equal parts sage advice and indiscriminate sexual innuendo. His screen time is appropriately limited, but he’s fitting as a comic sidebar and full of the type of colorful euphemisms that assist in steering the story away from potential romantic pitfalls.

Despite its flaws, this is a well paced film that delivers some memorably funny moments, including a hilarious breakup scene in the opening with brief appearances by Emma Stone (“Easy A”) and Andy Samberg (SNL), as well as an unconscious victim of a black light pen, a scary run-in with Olympic snowboarder Shaun White and a flash mob in Times Square. Kudos also to Nolan Gould, who has a stand out role as Dylan’s extremely polite, magic-obsessed nephew.

While its scope isn’t much broader than that of standard date night fare, it’s an example for subsequent efforts that revisiting a hackneyed story line can just as easily result in a fresh perspective. “Friends With Benefits” is driven by comic dialogue and garnished with the undertones of family and relationship issues, avoiding the genre epithets that befall so many films with similar premises. Though it’s ‘R’ rating is not abused with the pervasive elements that are  commonplace this summer, it allows for some uninhibited moments that play out with hilarious feasibility while remaining in the realm of actual human nature.