Posted by Eddie Pasa on April 1, 2020 in Movie Reviews / No Comments

Before I get started, I hope you all are safe and healthy. There’s a lot going on out there; please don’t be afraid to reach out to friends and family. Try not to let the world get you down, but if it becomes too much of a struggle, there are numbers to call for help, like 800-273-8255. Please help victims of abuse who may be shut in with their tormentors during this quarantine or if someone needs food or water. Thanks always to the doctors and medical staffs trying their best, the first responders, and anyone keeping their businesses open to help the public – grocery store clerks, restaurant workers, food delivery folks (don’t be a dick – tip them well!), and others. Which leads to my second paragraph…

Some time ago, set photos of writer/director Jack Gorman’s short film Celtic Cross being filmed in Washington, DC made their way across Twitter and Facebook. It features a few actors who have had their DC-area theater productions stage-managed by my wife Jenn Carlson, and it also contains a linchpin performance by the in-arena voice of the Washington Capitals and Kastles, Wes Johnson. Not gonna lie – it’s nice to see familiar faces during our global health crisis, but Celtic Cross is more than that. It’s a nifty 20-minute bottle episode at a boutique funeral parlor occupied by a family full of quirks and sporting a deep scar which has obviously never healed. Alternating between little hijinks and the seriousness which this situation warrants, Gorman lets allusion and inference take over instead of outright giving the viewer everything they need to know until the appropriate time.

Celtic Cross’ vibe reads like the kind of theater Jenn has brought to my life, possessing an intimate nature which slow-rolls us into needing to know the exact circumstances of the deceased and those he leaves behind. Ethan (Jeremy Theobald) is struggling to keep it together, oscillating between the reality of his father Matthew (Michael Gabel) lying in the coffin at the head of the room and fantasies of thrashing his absent brother Owen (Peter McGlynn) for an unknown prior offense to the family. Joining Ethan are his wife Julia (Adrienne Nelson), spunky daughter Keira (Cait Kelley), matriarch Maggie (Mary Suib), alcoholic Uncle Frank (Johnson, decidedly not reprising his Frank from A Dirty Shame), and other family and friends who try to help the day along as much as they can.

Theobald firmly defines Ethan as a stand-up guy who takes his roles as father, son, brother, and receivership of the family heirloom – a Celtic cross on a necklace – very seriously. However, the people and thoughts swirling around him are taking him away from staying focused on what needs to be done. We see Julia and Maggie being as supportive as possible, but they’re also plainly uncomfortable with their surroundings and their objective. It’s as if the peace wished upon families who’ve suffered loss has totally passed them by; now, they’re as skittish as school children, taking every opportunity to sidetrack themselves with multiple diversions. 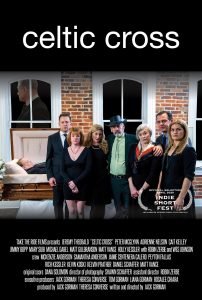 Frank, well-meaning but a little too wink-wink-nudge-nudgy, tries to add some levity but winds up having to face the gravity of his own sorrows. He knows what happened with Owen, and he comforts himself with a tip of his flask into his coffee cup, sparing some for Keira as well. Through him, the film’s theme is discovered and branches out from him into the other guests and hosts, all of them longing for connection and a catharsis that may never come. Hell, even Grandma Maggie’s looking for someone to listen to her demands to be escorted to the bathroom.

Celtic Cross is full of little moments between different pairings of characters, as if they’re passing the hat to see who winds up with whom. Julia starts trying to keep things organized, but eventually slips into her own shenanigans with her sister Lindsay (Robin Zerbe) as they avoid having to deal with Maggie. Frank and Keira share a moment as they wonder how Owen being there would’ve affected the family mood. Lindsay and her husband Matthew (Jimmy Bopp) have a small talk in a side room. The person Ethan most wants to talk with isn’t there, but he finds some solace in a chance meeting with a man named Declan (Matt Gulbranson) who might be able to tell Ethan what he needs to hear.

The custody of the Celtic cross changes from person to person in various scene transitions. We hear of its origins, how it’s been handed down throughout the generations, and who’s supposed to have it when all is said and done. It’s a balancing of the past and present, and it’s curious to see who winds up with the cross at the end, imparting Celtic Cross’ final wisdom of letting old ghosts lie and looking to the future. Within this short film’s bones is a massive amount of familial love, and it is smartly borne by both the cast and the script. Gorman skips the dysfunction you’d normally see in films like these and goes for a more touching, emotional approach.

There aren’t any major, screaming-out-of-left-field revelations, the kind which drove Frank Oz’s Death at a Funeral (I prefer the original UK version) into madness. Instead, we see interactions in which simplicity forges a more tangible bond between the characters. The film mixes the chaos of mourning the dead with the vibrant life which waits outside the funeral parlor walls; it’s an odd blend, to be sure, but Gorman and the cast have enough command of the story to never let it devolve into silliness, slapstick, or melodrama. Instead, Celtic Cross is allowed to be personal without being barbed, funny without being vulgar, sweet without being saccharine, and vastly loving without being smothering.